Graphic Studio: 50 Years in Dublin shows the range of the studio's scope, by way of the earliest works from the five founders, right through to a diverse selection of artists. Post-War American Art: the Novak / O'Doherty Collection will open in the New Galleries on the occasion of the generous gift by art historian Barbara Novak and artist Brian O'Doherty. It comprises paintings and sculpture, photographs, limited edition and an extensive range of works on paper. Works by Jasper Johns, Robert Rauschenberg, Christo, Edward Hopper and many more. 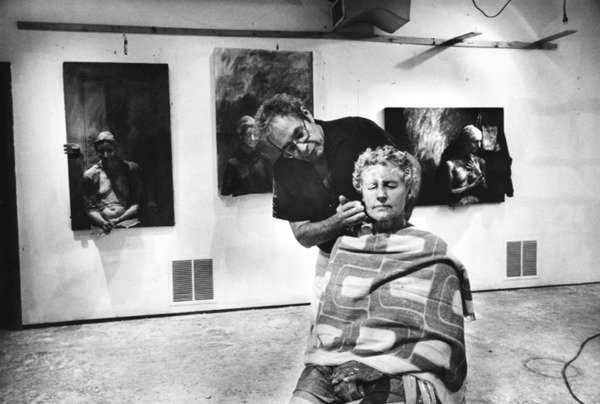 The Irish Museum of Modern Art presents an exhibition celebrating the 50th anniversary of the Graphic Studio Dublin from 8 September 2010 – 3 January 2011. Graphic Studio Dublin was Ireland’s first fine art print studio and, through innovation and progressive thinking, it has helped establish Ireland’s reputation as the home of world class printmakers.

Graphic Studio: 50 Years in Dublin shows the range of the studio’s scope, by way of the earliest works from the five founders (Patrick Hickey, Leslie MacWeeney, Liam Miller, Elizabeth Rivers and Anne Yeats), right through to a diverse selection of artists from different practices and backgrounds, such as A.R. Penck, William Crozier, Patrick Scott, Dorothy Cross and Barry Flanagan. The exhibition also considers the newer generation of artists who are continuing this legacy by integrating print into their practices, such as artists Diana Copperwhite and Geraldine O’Neill.

The exhibition will be accompanied by a full-colour, illustrated catalogue that will contain essays by the exhibition’s curator Eimear O’Raw, as well as Aidan Dunne and Jackie Ryan, along with an introduction by Enrique Juncosa, Director of IMMA.

An exhibition of 76 artworks by many of America’s leading post-war artists gifted to the IMMA Collection by art historian Barbara Novak and artist Brian O’Doherty / Patrick Ireland opens to the public at the Irish Museum of Modern Art on Wednesday 8 September 2010. Post-War American Art: The Novak/O’Doherty Collection, donated in association with the American Ireland Fund, comprises paintings and sculpture and an extensive range of works on paper, including watercolours, drawings, photographs and limited edition prints and multiples. Works by Joseph Cornell, Dan Graham, Jasper Johns, Roy Lichtenstein, Robert Rauschenberg and a host of other celebrated artists are included in the exhibition.

The donation is particularly rich in works from New York of the 1960s and ‘70s; many the result of friendships with outstanding artists from that milieu. We can imagine the lives of Barbara Novak and Brian O'Doherty over 50 years – they married in 1960 – through these paintings, photographs, drawings, sculptures and prints. Many works were swops with other artists or tokens of friendship, inscribed with dedications or personal notes; others reflect their ongoing exchanges and correspondence through postcards and letters, such as the postcards sent by Sol LeWitt over the years incorporating sketches. Still other works were gifts, while some were purchased. Through them we see that Barbara Novak and Brian O’Doherty were central figures in the art community of the 1960s and ‘70s and beyond.

Four important works, by Edward Hopper, Marcel Duchamp, George Segal and Jasper Johns, were gifted in 2009. The forthcoming exhibition celebrates the arrival of the balance of their collection to IMMA. Other artists represented in the collection include Christo, Mel Bochner, William Scharf, Peter Hutchinson, Les Levine, Sonja Sekula, John Coplans, Arnold Newman, and Elise Asher. Some works were included in the recent exhibition Vertical Thoughts: Morton Feldman and the Visual Arts – appropriate since the composer Morton Feldman was a close of friend of the donors.

Born in New York, Barbara Novak is an enormously influential art historian as well as artist and novelist. She is the author of American Painting of the Nineteenth Century, Nature and Culture and Voyages of the Self, recently published as a trilogy on American art and culture by Oxford University Press. She joined the art history department of Barnard College and Columbia University in 1958 and retired as Helen Goodhart Altschul Professor Emerita in 1998. A chaired professorship at Barnard College was named in her honour.

Born in Ballaghadereen, Co Roscommon, Brian O'Doherty variously exhibited in the Irish Exhibition of Living Art and in the RHA and Oireachtas exhibitions from 1950 to 1956. He moved to the United States in 1957, where he became a pioneer in the development of Conceptual Art and also a renowned writer and critic. He has had several retrospectives, most recently in New York University's Grey Gallery. His work has been seen in Documenta, the Venice Biennale, and Rosc. He is represented in the collections of the Metropolitan Museum and the Museum of Modern Art in New York, the Smithsonian American Art Museum in Washington and the Centre Pompidou in Paris. The influence of his ground-breaking collection of essays Inside the White Cube continues.

IMMA’s Collection comprises more than 4,500 works in a wide range of media, having grown significantly, through purchases, donations, long-term loans and the commissioning of new works. It is shown in themed exhibitions at IMMA, and also throughout Ireland via the Museum’s unique National Programme. The presence of IMMA’s Collection abroad has increased substantially in recent years, with large-scale exhibitions in Beijing and Shanghai, China, Boston, Pittsburgh and Chicago, United States, St John’s, Newfoundland, and San Sebastian, Spain, plus numerous loans of individual works to museums and galleries worldwide.

The exhibition is accompanied by an illustated catalogue, with a contextualising comment by Brian O’Doherty and individual insights on almost all of the works by both donors; an introductory essay by Christina Kennedy and a foreword by Enrique Juncosa, Director, IMMA.

This exhibition is supported by the Clarence Hotel.