The works brought together in 'False Friends / An Ephemeral Video Library' feature stories from the margins of history and mainstream media. Using tension, humour and testimony, these micro-narratives work to shed light on events outside the history books and mainstream media. The Andre Kertesz's solo show bring together a sizeable ensemble of prints and original documents covering the different periods of artist's life and artistic career. Tomo Savic-Gecan constructs artworks that literally exist between present and future, here and there, between one public space and another, and between the minds of a viewer, wherever they might be, and the institutional space of the exhibition, which might happen to be somewhere else. 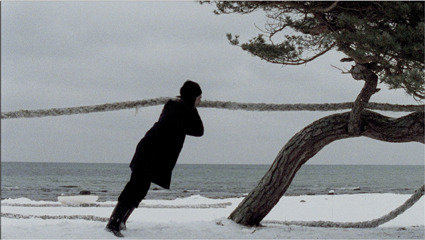 The logic of mainstream media coverage of events is usually based on constant renewal, in order to keep the spectator interested. They therefore have a relatively limited lifespan, which is why information is sometimes forgotten or goes straight into the archives. At the same time, however, it is clear that the events themselves evolve and gain in complexity, and continue to exist outside the main media circuits.

The advent of digital platforms, fostering new communications networks and blogs, has helped to attenuate the impact of the mass media by creating alternative modes of access to information. This is precisely the context in which the “ephemeral videotheque” project can be interpreted.

The works brought together in “False Friends / An Ephemeral Video Library” feature stories from the margins of history and mainstream media. Using tension, humour and testimony, these micro-narratives work to shed light on events outside the history books and mainstream media.

This selection of films made by artists from all over the world offers a fragmented description of the real that is rich in nuances. In a sense, these works highlight dissonance and failings of synchronisation, perhaps even shaking our convictions or preconceptions. They are interested in the reality that we know, but do not describe it in a classic, conventional way. Nor do they seek to mediate it, or to make it easier to understand by simplifying it. They are “false friends” – inadequate translations of events that still contain echoes of reality.

There has never been a proper retrospective of the work of André Kertész (Budapest, 1894–New York, 1985) in Europe, even though he donated all his negatives to the French state. And yet he is one of the most important photographers of the 20th century, both for the richness of his body of work and for the sheer longevity of his career.

For the first time, this show will bring together a sizeable ensemble of prints and original documents covering the different periods of Kertész’s life and artistic career. It will reveal how Kertész developed a genuine poetics of photography – what he himself called “a real photographic language.” The display will highlight the autonomy of each photograph, while at the same time indicating the presence of series or recurring themes (for example, the distortions, the buildings of New York, the chimneys, and solitude).

Exhibition organized in collaboration with
the Institut Hongrois de Paris

Tomo Savić-Gecan constructs artworks that literally exist between present and future, here and there, between one public space and another, and between the minds of a viewer, wherever they might be, and the institutional space of the exhibition, which might happen to be somewhere else. For instance, as when he devised a situation so that visitors to an exhibition about the theme of “economy” were asked to decide on the entrance price for the visitor that would enter immediately after him or her (Untitled, 2000). Or as in his piece shown in Venice for the 2005 Biennale, where a line of text on an exhibition space’s wall recounted that the number of visitors at that very moment entering an art center in Amsterdam was impacting the temperature of a public pool in Tallinn (the pool having been programmed to receive the real time information and alter its temperature in relation to it), (Untitled, 2005).

For the Satellite Program, he will present a major new project in two parts, one located in the Jeu de Paume, the other—it’s exact mirror image—in another institutional space, the Kunsthall in Bergen (Norway). Each part will be an exact reconstruction of an existing space in the Jeu de Paume, but with a crucially changed detail: in each room, one of the walls will be devised so that it can slowly move at an infinitesimally small rate in relation to each visitor that enters the opposite room on the other side of Paris. Each slowing shrinking room will effectively be a reflection of the other, with the motion in one space being set off by the visitors to the other after a short delay.

Eliminating everything from the piece but the space itself, the “content” of the piece is the artist’s reconsideration of the conventional “white cube” of the institution, here doubled and made to almost monstrously (and increasingly claustrophobically) follow the actions of its double across Europe. Linking two institutions and two publics (some perhaps totally unaware that their entry to a room has consequences elsewhere), Savić-Gecan’s architectural intervention continues the artist’s preoccupation with envisioning artworks that create an aesthetic experience across distinct times and spaces.

Jeu de Paume receives a subsidy from the Ministry of Culture and Communication.
It gratefully acknowledges support from Neuflize Vie, its global partner.

Bergen Kunsthall receives a subsidy from:
Sparebanken Vest, The City of Bergen—Department of Culture, Church Affairs and Sports, Hordaland County Council and the Norwegian Ministry of Culture.

The Fondation Nationale des Arts Graphiques et Plastiques (FNAGP) contributes to the production of the new artworks featured in the Satellite programme.

The catalogue is published with support from
Les Amis du Jeu de Paume.