Architecture. An exhibition of Jean Prouve's prefabricated architectural designs inaugurates the new project space on the second floor of the gallery. Prouve' is widely acknowledged as one of the twentieth century's most important and influential designers whose wide-ranging oeuvre combined bold elegance with economy of means and strong social conscience. 'Camino Real' is a group of five new paintings by Cy Twombly. Each displays the inimitable and exuberant painterly gestures and highly keyed palette typical of his recent paintings. Camino Real is a reference to the play by Tennessee Williams, first performed in New York in 1953. 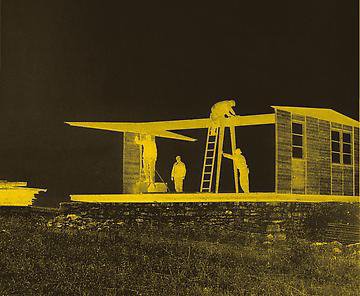 My creative process imposes from the outset a formative idea that is rigorously realisable. The formative idea is, above all, the understanding of an ensemble as a whole.
Jean Prouvé

On 20 October 2010 Gagosian Gallery will open in Paris. An exhibition of Jean Prouvé’s prefabricated architectural designs will inaugurate the new project space on the second floor of the gallery.

Jean Prouvé (1901-1984) is widely acknowledged as one of the twentieth century’s most important and influential designers whose wide-ranging oeuvre combined bold elegance with economy of means and strong social conscience. Working as a craftsman, designer, manufacturer, architect, teacher, and engineer, his career spanned more than sixty years, during which time he produced prefabricated houses, building components and façades, as well as furniture for the home, office and school. The exhibition focuses primarily on Prouvé’s prefabricated structures of the late 1940s and includes maquettes, plans, and architectural sections of them, and films. It attests to the pivotal role that Prouvé played in the development of cutting-edge technology and modular systems for mass production in the post-war modernist period.

Prouvé trained as an artisan blacksmith and his intimate knowledge of metal remained the foundation of his work and career. Aware of the limitations of ornamental and wrought-iron work and keen to embrace the modern movement, he moved on to steel and aluminium, folding and arc-welding. In 1931 he established the Atelier Jean Prouvé, where he began to produce light-weight metal furniture of his own design, as well as collaborating with some of the best-known designers of his time, including Le Corbusier and Charlotte Perriand. Furniture production became a core part of his business. He favored the public sector in the growing areas of health, education and administration, which reflected a social ideal but also offered the economies of scale. By 1936 he was producing a catalogue of standard models for hospitals, schools and offices. The potential for mass production inspired Prouvé to develop and patent industrial products using folded sheet metal for the construction of buildings. These included movable partitioning, metal doors and elevator cages.

The onset of WWII and the age of austerity that followed marked a period of enforced experiment for Prouvé and in 1947 he moved his operations to Maxéville, just outside Nancy. With his own design studio, he could combine research, prototype development and production. At Maxéville he set about fulfilling his ambitious plan to alter the building process from a craft-based practice to that of a mechanized industry, producing not only houses, prefabricated huts, doors, windows, roof elements and façade panels but also a production line for furniture based on his own designs. It was in this creative environment that the prefabricated refugee houses of 1945 were developed, followed by the flat-packed, tropical houses for Niger and the Republic of Congo in 1949 and 1950.

Larry Gagosian comments: “I greatly admire Jean Prouvé and I am pleased to present his groundbreaking work in collaboration with Patrick Seguin, who has championed the work of outstanding French post-war designers and architects for more than twenty years. We are delighted to be working with Patrick again, this time as curator of the inaugural exhibition for the project space of our new Paris gallery.”

Bohemia has no banner. It survives by discretion.
-- Tennessee Williams

To inaugurate the new Paris gallery, Gagosian Gallery is pleased to present “Camino Real,” a group of five new paintings by Cy Twombly. Each displays the inimitable and exuberant painterly gestures and highly keyed palette typical of his recent paintings.

Camino Real is a reference to the play by Tennessee Williams, first performed in New York in 1953. The cast of characters, which includes Don Quixote, Lord Byron, Casanova, Baron de Charlus, and Marguerite Gautier, represents a romantic attitude to life, ”old knights, dreamers and troublemakers” who retain a wild and untrammelled vision.

Twombly’s paintings have an allusive and elusive relationship with this title; they are renewed evidence of his exceptional vitality and the freedom to work with intense colors and effusive gestures that are not restricted to a single reference. Their vivid palette relates to his previous series of "rose" and "peony" paintings, and contrasts with the austerity of the patinated bronze sculptures that are also part of this exhibition.

A fully illustrated catalogue with an essay by Marie-Laure Bernadac will accompany the exhibition.

Cy Twombly was born in 1928 in Lexington, Virginia. He studied at the School of the Museum of Fine Arts, Boston (1947–1949); the Art Students League, New York (1950–1951); and Black Mountain College, North Carolina (1951–1952). In the mid 1950s, following travels in Europe and Africa, he emerged as a prominent figure among a group of artists working in New York that included Robert Rauschenberg and Jasper Johns. In 1959, Twombly settled permanently in Italy. In 1968, the Milwaukee Art Center mounted his first retrospective. This was followed by major retrospectives at the Kunsthaus Zürich (1987) travelling to Madrid, London and Paris; the Museum of Modern Art, New York (1994) (travelling to Houston, Los Angeles, and Berlin) and the Pinakothek der Moderne in Munich (2006). In 1995, the Cy Twombly Gallery opened at The Menil Collection, Houston, exhibiting works made by the artist since 1954. The European retrospective "Cy Twombly: Cycles and Seasons" opened at the Tate Modern, London in June 2008, with subsequent versions at the Guggenheim Bilbao and the Museum of Modern Art in Rome in 2009. Recent exhibitions include "Cy Twombly: The Natural World, Selected Works 2000-2007," The Art Institute of Chicago (2009) and "Sensations of the Moment," the Museum Moderner Kunst Stiftung Ludwig, Vienna, (2009). Earlier this year Twombly’s permanent site-specific painting, Ceiling was unveiled in the Salle des Bronzes at the Musée du Louvre. At the same time he was made Chevalier of the Légion d’Honneur by the French government.