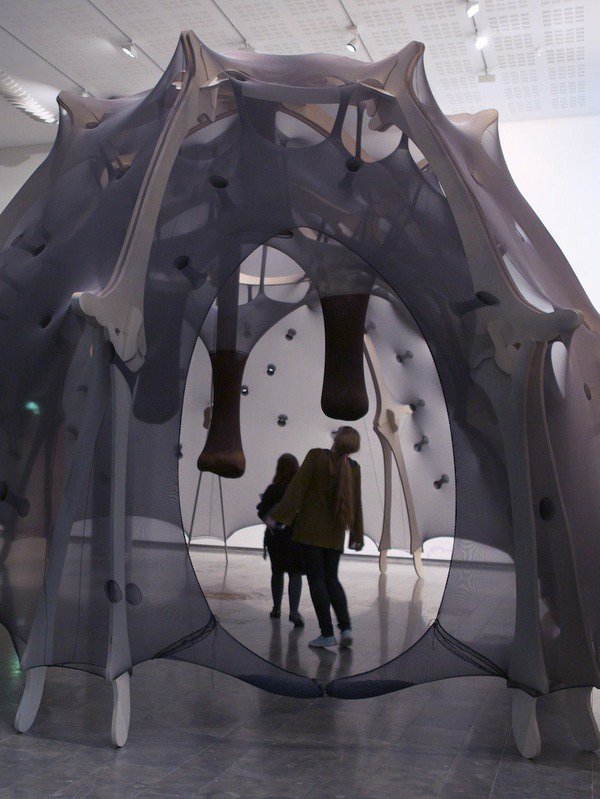 The Astrup Fearnley Museum of Modern Art is honoured to have the privilege and the pleasure to present an exhibition featuring a rich selection of Ernesto Neto's works. Since this is the first time his work is seen in such scope, the exhibition offers a unique opportunity to become acquainted with key aspects of Neto's artistic practice.

The exhibition presents a selective body of Neto's work from the past ten years. The aim has been to highlight the diversity of the artistic ideas, innovations and formalistic proposals within his oeuvre. Visitors will experience the sensuality and beauty of the suspended gravity sculptures (Desiring a Horizon of Gravity, While Nothing Happens and Variation on Color Seed Space Time Love, 2005, 2008 and 2009, respectively) as well as architectural sculptures like Stone Lips, Pepper Tits, Clove Love, Fog Frog, 2008, womblike chambers that museum-goers are invited to enter and be fully enveloped in. Other installations are more directly tactile, such as Neto's floor pieces, which invite spectators to walk, sit or recline directly on the works, themselves. Included in the exhibition are also the object-based sculptures that play with the notion of "systems" and refer to children's games or pop-cultural vernacular. And one mustn't forget the wall pieces, formal experiments of lines (that are in fact strings of fabric and laser-cut MDF) in a wide spectrum of colours and materials.

At first sight Neto's body of work can seem purely abstract, but their meanings are layered and far more complex than the surface may suggest. There is not only an interrelationship between the work, the environment and the spectator in a sensorial way, but a powerfully physical one, too. Indeed, Neto's best works induce a complicated state of inter-subjectivity between the forms and the materials, formulating a "landscape" (Densidade e Buracos de Minhoca, which premiered at the Liverpool Biennale in 1999) or an "animal" (O Bicho, from the 2001 Venice Biennale). More precisely, materials like sugar, spices and glass carry strong socio-cultural connotations: colonialism, or the fragility of political systems. Seen with recent Brazilian political history in the background, there is certainly no innocence or randomness in his chosen forms and materials. And many of the works bear certain formal elements, such as the "feet" of the sculptures filled with sugar, cinnamon or otherwise, that are at once sexually-charged (recalling phalluses and vaginas) and totally androgynous.

Neto's art is anchored firmly within a rich European and Brazilian modernistic tradition. The artist has highlighted Dutch abstract painter Piet Mondrian as singularly influential upon the Brazilian modernists that would follow in his wake, but other predecessors clearly left their mark as well. The playfulness of surrealists like Joan Miro, for example, is eminently evident, as is the sensuality of Jean Arp's lines and organic forms, and the suspension and mobility of Alexander Calder. Even the choice of common materials like Formica, nylon and Styrofoam that Neto would take up have a distinctly modernist heritage.

Outside of Europe, influences span Brazilian pioneers such as Oscar Niemeyer, one of the greatest modernist architects of all, and later Neo-concrete artists, Hélio Oiticica and Lygia Clark. And in America, one witnesses a delicate attention to space synonymous with minimalists like Donald Judd and a proclivity towards physical risk, balance, gravity that we find in the work of Richard Serra. More recent, yet, one could say that Neto is a Neo-modernist in a similar vein as Olafur Eliasson, Tomas Saraceno or even Sarah Morris – each being driven by an insatiable will to create new visions, experiences and narratives of our built world.

The artist has entitled the exhibition "Intimacy." This is particularly apt for it is indeed an intimate occasion for the artist to reflect with us on the development of his artistic production over the past decade. Together, we inhabit a museum space that has become a theatre of multilayered and inspiring forms of all shapes, smells and sizes: organic symbiosis, modernism, formalism, science fiction, design, anthropology, puzzle and play all have their role. In the end, the spectator penetrates an enigmatic world of astonishing fantasy and strange exotic beauty that, like life itself, can never be fully disentangled from social reality. Neto's body of work may ultimately be left to History, but it will never stop growing, changing or evolving.

An exhibition catalogue has been published with texts by Gunnar B. Kvaran, Florencia Malbran, Michael Asbury, Donatien Grau and Ernesto Neto.