A group exhibition shows works that in content or form sound out the limits and possibilities of freedom of expression and confronts examples of media reports. The artistic positions questions and analyses the ideological role that freedom of speech plays in Western democracy. Contemporary is a solo show by Silke Wagner, who transfers genuinely socially relevant topics into the art context. 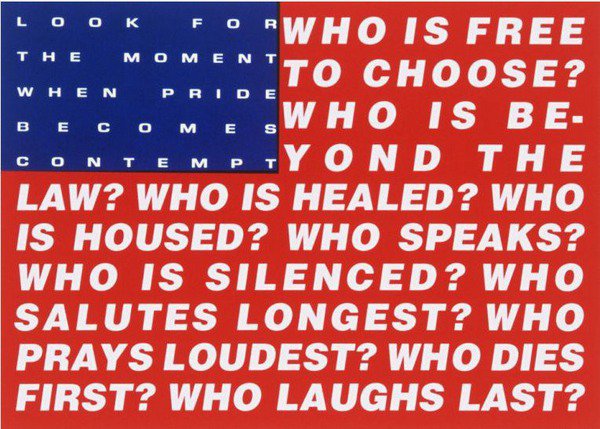 The exhibition "Freedom of Speech" questions and analyses the concept of freedom of speech and the ideological role it plays in Western democracy. Everything revolves around the question: What if only those who say the truth are allowed to speak? What consequences does the freedom of expression have for our society? How and where is this freedom instrumentalized? Justified questions, that would also have been apt in connection with the debate about Thilo Sarrazin's book and his racist comments in the media. However, this controversy also manifested itself in the cartoon dispute in 2005, when a right-wing Danish daily newspaper published the so-called "Muhammad cartoons." The ensuing conflict and the Iranian reaction in the form of a "Holocaust cartoon competition" provoked a public discussion on civil rights and liberties – the freedom of speech, expression, and the press – and truth.

The exhibition confronts examples of media reports (e.g., the "Muhammad cartoonss" or the controversial covers of Hustler, Stern, or Spiegel), historical events (e.g., the Black Power and Free Speech movements in the USA), as well as artistic positions.

With the collaboration of the Duisburger Institut für Sprach- und Sozialforschung (Duisburg Institute of Linguistic and Social Research, DISS), the truth value of the works are examined by means of critical discourse analysis. This form of analysis developed by the DISS on the basis of the theories and writing of Michel Foucault is applied like a film over the linguistic and pictorial levels of the collected media reports and works of art. That the works of art become objects of analysis is unique in this form but takes account of the fact that they also play an important role in constituting everyday knowledge and therefore also need to be considered.

Apart from works addressing the universal right to freedom of expression (e.g., the works "Prohibited Imports" by Maria Eichhorn or "Wollt ihr das totale Bild" by Klaus Staeck), the exhibition shows works that in content or form sound out the limits and possibilities of freedom of expression and speech (e.g., "Turkish Delight" by Olaf Metzel or "bürgersteig" by Silke Wagner). In the context of the exhibition, "State Britain" by the Turner Prize winner Mark Wallinger is being shown for the first time in Germany. The 40-metre-long installation of demonstration banners, posters, and flags by the anti-war activist Brian Haw fills the entire area of the exhibition space on the first floor of the Kunstverein Hamburg.

"Freedom of Speech" at the Kunstverein Hamburg concludes a trilogy that had begun in December 2009 with the exhibition "Where's the wind when it isn't blowing? – Political graphic novels from Albrecht Dürer to Art Spiegelman" and had continued with "We, Hamburg" in March 2010. The three exhibitions, differing strongly in both theme and formal approach, have examined the cultural importance of images, their perception and political function in societal discourses.

The exhibition "Freedom of Speech" has been developed in cooperation with the Neuer Berliner Kunstverein (exhibition dates: 11 December 2010 to 30 January 2011) and in collaboration with the Duisburger Institut für Sprach- und Sozialforschung (DISS).

To accompany the exhibition, the Verlag der Buchhandlung Walther König is publishing a reader in January 2011.

An application for smartphones has also been developed for the exhibition that functions as audioguide and provides both interviews with artists, curators, and authors as well as further background information on certain subjects addressed by the show. Brief audio presentations of individual works of art and historical events are given.

In a solo exhibition, the Kunstverein Hamburg is presenting a neon work by Silke Wagner (*1968, lives in Frankfurt/Main).

For the most part, neon signs are used in the urban space for outdoor advertising to generate attention and convey a message in a vivid manner. With her neon works, Silke Wagner, too, engages in a form of pictorial information transmission. However, she concentrates on political statements or symbols. Political enlightenment and agitation are the order of the day, beyond the classical demonstration banners and posters, beyond the accustomed artistic media and fields of action. Moreover, Wagner transfers genuinely socially relevant topics into the art context, thus not only generating new publicity but also blurring the dividing lines between the exhibition situation and everyday life.

The work “When Saturday Comes” – originally conceived for the open air exhibition “Das große Rasenstück” in Nuremberg in 2006 – assembles motifs from the world of soccer, taking a look at critical aspects of the sport. The aesthetic treatment of soccer is induced less by love of the game than by the fact that the “soccer system” can tell us a great deal about social developments and political trends. Silke Wagner selects various events and personalities that stand for the development of and concern with soccer. For example, we find a picture of the British player Justin Fashanu. In the 1980s, he played for Nottingham Forest and other clubs, and was the first professional player to out himself as homosexual, which ultimately led to his dismissal. Or the face of Cesar Luis Menotti, who in 1978 won the world cup as trainer for Argentina. At the presentation of the trophy he demonstratively refused before the cameras to shake hands with the Argentinean dictator General Videla. In the ground floor exhibition space of the Kunstverein, the stylised faces, soccer emblems and motifs are arranged to form a neon wall that builds up step by step.