VoTH is a project of cultural exchange between Russia and the Netherlands, initiated by Dutch curators Marjan Teeuwen and Ine Lamers. The core of this exhibition is an endeavour of 8 Russian and 8 Dutch contemporary artists to analyze and reflect upon some aspects of today's Russian society, culture, and history. All artists have created new work for this project to discover whether contemporary art can act as a binding force. The long-term aim of this travelling exhibition is to realize artistic and cultural exchange on the highest possible level. At the same time the Museum presents a solo exhibition of painter Viktor Dynnikov (1939-2005), the first full-scale retrospective of the artist, presenting well-known and lesser-known works. At 17 Yermolaevsky Lane, the third part of History of Russian Video Art, a three-part project consisting of a series of exhibitions, lectures, screenings and publications illustrating the birth, first steps and further development of video as an artistic form in Russia. 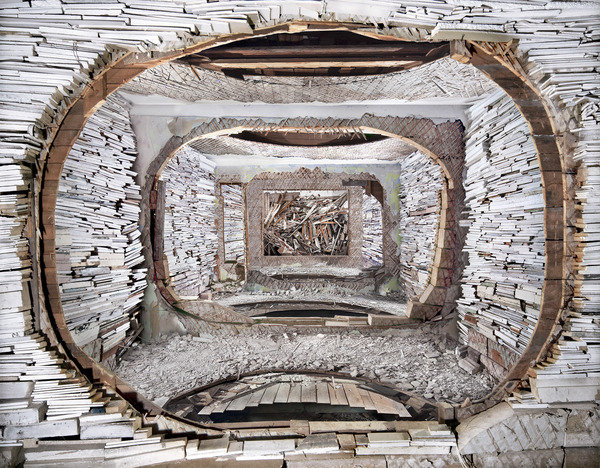 VoTH is a project of cultural exchange between Russia and the Netherlands, initiated by Dutch curators Marjan Teeuwen and Ine Lamers (Marjan Teeuwen / KW_14 is responsible for the organization of the exhibitions and the catalogue). The core of this exhibition is an endeavour of 8 Russian and 8 Dutch contemporary artists to analyze and reflect upon some aspects of today’s Russian society, culture, and history. All artists have created new work for this project.

Holland and Russia have long and fruitful historic ties, yet collaboration and exchange in the field of contemporary art have not been developed intensely. Having a sincere interest in Russian art and culture, curators of VoTH want to discover whether contemporary art can act as a binding force. The long-term aim of this travelling exhibition is to realize artistic and cultural exchange on the highest possible level.

While manifestations of creative positions and views on art of the exhibition’s participants may differ considerably, a common feature is that they all explore existential and cultural questions concerning Russia. VoTH concept is based
on the statement that a transfer into a different culture (in this case, Russian culture) goes beyond a simple incorporation of visual elements or clichéd quotations. Exhibits on display are multifaceted and unpredictable, they display ambiguity and individual vision of each artist. Both these factors – the variety of creative positions as well as the current social and economic relationship between Holland and Russia – place the exhibition within the contemporary international context.

Art thrives particularly well in a dialogue between outsider and insider, where the polarities of distance and proximity alternate. From a distant viewpoint, outsiders oversee the whole and have an innovative perspective on it; insiders have a personal sensitivity and may penetrate into the very core, the heart of the matter. This dual position, which is embodied in the practice of a travelling artist, is best for an autonomous and reflective creative gesture. Continually engaging themselves in motion, artists create works that reflect Russia in the broadest sense.

Obviously, the starting points are very different for Russian and Dutch participants of the exhibition. Russian artists, who grew up and were educated in the USSR or in the new Russia, can be called insiders. All of them have distanced themselves from their home country – temporarily or permanently, to study or realize projects abroad. During their travels, they were disconnected from familiar surroundings and could see Russia from outside, if only for a time.
Dutch participants of the exhibition balance these dual positions in another way. They are foreigners in Russia, though they try to get as close as possible to the subject of their investigation. With both Russian and Dutch artists, these precarious oscillations between proximity and distance create the right attitude towards essential issues of the human being.

VoTH exhibition is accompanied by a catalogue that contains introductory articles about the participants and some critical essays. Contributors to the publication art: Sjeng Scheijen (art historian, writer and former cultural attaché of the Dutch Embassy in Moscow), Ksenia Fedorova (curator of the National Center for Contemporary Art in Ekaterinburg), Bas Heijne (Dutch writer and columnist), Sergey Kovalevsky (curator of Krasnoyarsk Museum Center), and Elly Stegeman (curator of Stedelijk Museum ’s-Hertogenbosch).

VoTH project has been realized with the support of Fonds BKVB Amsterdam, Wilhelmina Jansen Fonds (Haren, the Netherlands), Embassy of the Netherlands in Moscow, DSM/DNP, BKKC, Stichting Strokroos, and the local authorities of ’s-Hertogenbosch.

Moscow Museum of Modern Art presents a solo exhibition of painter Viktor Dynnikov (1939-2005). He was born on October 25 — the same day as Pablo Picasso, but 58 years later. Dynnikov regarded this coincidence with irony: «The fact that I have discovered such a parallel with a great Fauve like him boosted my morale. Why should I feel inferior if I was born and live in such a great place as Russia?» After school and military service, Dynnikov enrolled in the faculty of graphic arts at the Pedagogic Institute in Krasnodar. After having spent three years there, he abandoned everything and moved to Leningrad. He wanted to acquire fundamental artistic education, so he was admitted to the Academy of Arts. The drawing of a sitter that he created during entry exam hung in the office of the admission committee for many years after, as a perfect example.

In 1970, after graduating from the Academy, Dynnikov moved to Vladimir — ‘a blessed corner, nice and graceful to the core,’ as he later wrote. Enduring years came: he had neither a studio, nor even a place to live. Then Dynnikov’s works were often judged ambiguously: «My searches and those of my friends weren’t welcomed by everyone. A searching creation didn’t fit into the cheerful system called ‘Vladimir school of landscape painting’. We didn’t match them. Talented veterans tried to teach us how to live and create in the right way. But we were young and had our own opinions.»

With equal dose of passion, Dynnikov worked in pastel, gouache, and charcoal, attaching huge importance to the material. He often varied the same motif in different techniques, looking for the best accord with his thoughts, feelings, and plastic sensations that changed through time. During 35 years spent in Vladimir, the artist took part in nine exhibitions, including two solo shows (1985 and 1989). The second of these shows faced harsh antagonism from the regional committee of the communist party that claimed the exhibition to be too ‘mundane’, with an absence of any positive character.

Since 2006, thanks to the efforts of three galleries — ARS LONGA, ART-RA, and EXPO-88 — Dynnikov’s works were presented in 25 exhibitions, including 12 solo shows, and the artist’s name became familiar to a wide circle of professionals and public. To commemorate the artist’s jubilee, the galleries published an album that includes over 150 pieces from the extensive heritage of the artist.

The exhibition hosted by the Moscow Museum of Modern Art will be the first full-scale retrospective of the artist, presenting well-known and lesser-known works.

Started in January 2007 after several years of scrupulous investigations and methodical research, History of Russian Video Art is a three-part project consisting of a series of exhibitions, lectures, screenings and publications illustrating the birth, first steps and further development of video as an artistic form in Russia.

Before the opening of the first event, the exhibition Volume 1, there was little systematic knowledge of the evolution of video art and its cultural value. Over the past years, History of Russian Video Art has filled all the gaps and managed to put video art on the map of Russian contemporary art, once and for all. Many important goals have been reached along the way:

the project has tracked down the starting point (Andrey Monastyrsky’s Conversation with a Lamp, 1985);
has acquainted the public with the pioneers working in semi-clandestine conditions to avoid the censoring control of the state;
has saved a few pivotal works from irreparable damage or loss;
has proved that video was the most powerful instrument that artists had at their disposal to speak to Russia and to the world about their identity, roles and expectations after the collapse of the Soviet Union;
has offered a thorough outline of the directions taken and the problems embraced by video artists working in the crucial decade in between the old and new millennia.

Volume 3 continues to narrate the history of video art making in Russia, starting from where the exhibition Volume 2 (March 2009) stopped. The most relevant achievements in the field of Russian video art made in recent years (approximately the past five years) are on display in the exhibition. This is a unique opportunity to come closer to the work of those artists who have gained national and international critical and public acclaim for their videos, to experience the newest tendencies explored by the young generation and to get to know the production made in many different regions of the Russian Federation.

Volume 3 enjoys the collaboration of experts in the field of art and new technologies who have chosen some of the forty works exhibited in the premises and compiled thematic programs for the projection room located on the 4th floor. Here the public will enjoy new videos every day, which will allow to include a great number of works in the display. Particularly valuable are these contributions, because one of the main tasks of the whole project is to promote discussion, debate critical views and familiarize with unknown expressions.

At the same time, throughout the duration of the exhibition, the public has the chance to view rare video documentaries on artists and people who have played a relevant role in the development of video art, as well as take part in open discussions and attend master classes given by the artists themselves.

Volume 3 is an unprecedented attempt to offer the widest possible overview — in total, more than five hundred works are to be shown — of the way Russian artists today use video technology to express their feelings and present their views of the world we live in. This the final part of the project History of Russian Video Art and the starting point of a future approach to video art as a form with its own 25-year old history and tradition.