unExhibit takes the legendary show an Exhibit by Richard Hamilton, or more properly by the Independent Group, held at Hatton Gallery, Newcastle upon Tyne in 1957, as the point of departure for considerations on the subject of the display-as-exhibition. The premise of an Exhibit was 'no objects, no ideas': an exhibition composed of colorful panels loosely suspended in space so that visitors could amble between them. 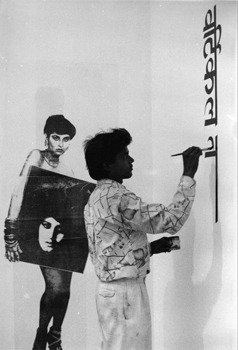 unExhibit takes the legendary show an Exhibit by Richard Hamilton, or more properly by the Independent Group, held at Hatton Gallery, Newcastle upon Tyne in 1957, as the point of departure for considerations on the subject of the display-as-exhibition. The premise of an Exhibit was "no objects, no ideas": an exhibition composed of colorful panels loosely suspended in space so that visitors could amble between them. This formal decision to do without exhibits and make the display subject of the show can be traced back to a series of attempts in modernism to expand painting into space or to elevate the display to the status of a subject in itself.

Transforming the Generali Foundation's exhibition space unExhibit wants to go one step further by exhibiting, both literally and figuratively, the act of not exhibiting. The concrete exhibition space at the Generali Foundation serves as the frame of reference for a transformation in which the displacement of spatial coordinates brought about by the use of certain materials—mirrors, wallpapers, lighting, fabrics—as well as techniques of reproduction and surface treatments—lithography, xerography, newspaper clipping, grid patterns—not only evacuates the space, but also recodes it.

Heimo Zobernig for example reduplicates the minimalist concrete wall—an essential feature of the existing architecture that marks its longitudinal axis. Turned into a wooden scaffold covered with an iridescent fabric resembling construction site safety netting, it is reborn in a glamorous guise, ready for a variety of projections and "mirroring." Willem Oorebeek, by contrast, applies wallpaper bearing a dot matrix to the multiply coded concrete wall. Oorebeek uses the matrix dot, whose career culminated in the "Ben-Day dots" of Pop art, in shades of black and gray as the reproductive mark par excellence of the technology of printing.

Perception through transparency and opacity
an Exhibit is relevant also as a form of interrogation of the institutional space and the roles played by authorship and the position of the beholder. The translucent panels, finally, mark a play with the experience of transparency and opacity that is of decisive importance to the subject's perceptions in a world defined by media. unExhibit raises the question in a slightly different way than an Exhibit did: the point is now not only to present "no objects, no ideas" but instead the medium or "display", but also to employ different forms of withdrawal, encryption, obfuscation, or obscuration to display the conditions on which media surfaces and their production of imagery rest.

The loss of authenticity
The loss of authenticity becomes manifest not only as a consequence of ongoing reproduction and repetition, as in Willem Oorebeek's Vertical Club, but paradoxically also by virtue of the heightened visibility of perfect surfaces, as Karthik Pandian and Mathias Poledna's 1991 illustrates. On the other hand, the "exhibited" aspect of models or other motifs from the world of "consumer culture" is on the other hand first removed from the process of its de-auratization by a process of obfuscation: thus in Willem Oorebeek's Blackouts, where a media image seems to be altogether effaced by a lithographic process of inking so that it can, upon closer inspection, become truly visible in the first place precisely by virtue of this process of invisibilization. Visibility and withdrawal are interdependent, as is also evident in the light projections, "aquariums," and "laboratory" examinations in the work of Ann Veronica Janssens.