The Picasso's exhibition brings together some 65 closely related collages, constructions, drawings, paintings, and photographs from over 35 public and private collections worldwide. Among them Violin Hanging on the Wall (1912-13), from the Kunstmuseum Bern, and Guitar, Gas Jet, and Bottle (1913), from the Scottish National Gallery of Modern Art, Edinburgh. Olesen's projects have addressed a range of subjects including legal codes, the natural sciences, distribution of capital, and art history, and have taken the form of posters, fliers, text, collages, found-object sculptures, and spatial interventions. For Projects 94, Olesen presents a new site-specific work. 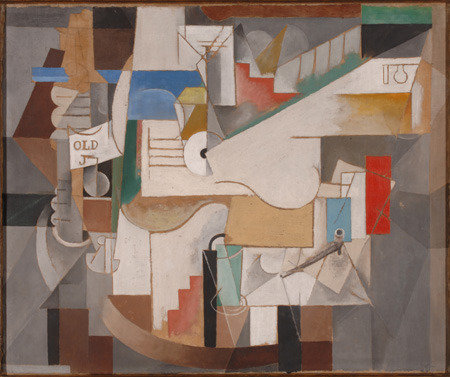 The exhibition Picasso: Guitars 1912–1914 takes as its point of departure two works given to The Museum of Modern Art by Pablo Picasso in the early 1970s: Guitar, assembled from cardboard, paper, wire, glue, and string in 1912, and a second version made of sheet metal in 1914. Unexpectedly humble in subject and unprecedented in mode of execution, the two Guitar constructions resembled no artwork ever seen before. Within Picasso’s long career they bracket a remarkably brief yet intensely generative period of material and structural experimentation. The exhibition, on view from February 13 through June 6, 2011, brings together some 65 closely related collages, constructions, drawings, paintings, and photographs from over 35 public and private collections worldwide. Several works on loan to the exhibition will be on view for the very first time in the United States, chief among them Violin Hanging on the Wall (1912–13), from the Kunstmuseum Bern, and Guitar, Gas Jet, and Bottle (1913), from the Scottish National Gallery of Modern Art, Edinburgh. MoMA is the exhibition’s only venue. Picasso: Guitars 1912–1914 is organized by Anne Umland, Curator, with Blair Hartzell, Curatorial Assistant, Department of Painting and Sculpture, The Museum of Modern Art.

Early photographs of Picasso’s studio indicate that he displayed his cardboard Guitar construction in at least two ways: as an independent object and as part of a larger still life assemblage that also included paper and wood (all the elements of which were long and erroneously presumed lost). Picasso had in fact elected to save only Guitar and the curved “tabletop” he had created to go beneath it, when he disassembled this still life. He packed these two selected components away together, most likely in autumn 1916, and subsequently left both pieces to the Museum upon his death. In 2005 a query from art historian Christine Poggi prompted the rediscovery of the tabletop in MoMA’s storage. Reuniting the tabletop with the Guitar for the first time since Picasso packed them away together almost a century ago prompts reconsideration of the distinct yet interrelated histories of two of his most iconic works. The cardboard Guitar’s variable modes of installation are characteristic of Picasso’s combinatory process during the two years that separate its creation in 1912 from its reiteration in sheet metal in 1914. Picasso: Guitars 1912–1914 is the first time that the cardboard Guitar is publicly exhibited with this distinctive element.

In 1914 the artist memorialized his fragile, papery Guitar construction in more fixed and durable sheet metal form. No welding holds together the planes of the construction; instead it is sewn together with wire in just a few ingeniously selected spots. Its projecting planes create a sense of volume, generating real shadows rather than the rendered shading historically used to simulate depth in painted and graphic art. Though closely related to the cardboard Guitar, it is very different in texture, color, pliancy, and durability.

Central to the exhibition are a selection of photographs taken by Picasso of in-progress or recently completed works, staged for his own small, hand-held camera. Several of these images capture the cardboard Guitar, surrounded by works on paper, installed in the artist’s Paris studio. Copies of the avant-garde journal Les Soirées de Paris, no.18, in which photographs of Picasso’s radical Cubist assemblages were first published, are also on display. The exhibition includes a sketchbook of over 100 drawings from 1913, presented in a digital kiosk, highlighting the artist’s interrelated working processes as a draughtsman and a sculptor and his particular focus on the subjects of a figure playing a guitar and a still life with a guitar.

Picasso: Guitars 1912–1914 affords a rich picture of Picasso’s process as he engaged with different materials, mediums, and techniques in an extraordinary cross-pollination of practices. Among the notable works on view are: Guitar (1912), Siphon, Glass, Newspaper, and Violin (1912), Musical Score and Guitar (1912), Violin Hanging on the Wall (1912–13), Guitar (1913), and Bar Table with Guitar (1913). For his painting Guitar, from 1912, Picasso paired traditional craftsman’s techniques used to imitate wood-graining and marble with bold, contoured planes. In the still life composition Siphon, Glass, Newspaper, and Violin, Picasso incorporated cut-and- pasted newspaper as both figure and ground, complicating the space occupied by his graphic still life.

Like pieces of a crude jigsaw puzzle, the cut-and-pasted components of the 1912 collage Musical Score and Guitar fit together in a summary account of an instrument’s contours. The commercially printed sheet music included in the work evokes the popular cabaret songs of Picasso’s life in Paris. Color and texture erupt across the surface of the 1912–13 painting Violin Hanging on the Wall. For the bold curves of the instrument’s body, Picasso mixed together grit and rough commercial spackle to create an unusually rough crust of impasto. These heterogeneous ingredients, rarely associated with fine art, mark this painting as among the most materially radical in Picasso’s long career.

The near abstraction of Guitar, from 1913, seems opposed to the legibility of the cardboard and sheet metal constructions with which it shares a name. Featuring roughly cut pieces of colored paper and worn wallpaper fragments—which Picasso purportedly tore off the walls to incorporate into his artwork—Guitar suggests a rapidity in execution, contrasting with Picasso’s conceptually rigorous play with the minimum means of referencing a real object. Visitors to Picasso’s studio in the years before World War I remarked that his works barely seemed “to possess the physical stamina necessary to survive”; and yet Bar Table with Guitar, held together with nothing more than pins, has preserved its improvisatory air. Featuring brightly colored papers typical of Picasso’s work in spring 1913 in Céret, it is embellished with a few additions of chalk and charcoal, and provides a strong contrast with the works that had filled the artist’s studio the previous winter: relatively austere newspaper clippings pasted on a white paper support.

Picasso: Guitars 1912–1914 provides an opportunity for new thinking about what is inarguably one of the pivotal moments in Picasso’s career and in 20th-century art. SPONSORSHIP: The exhibition is sponsored by Hanjin Shipping. Major support is provided by an indemnity from the Federal Council on the Arts and the Humanities. Additional funding is provided by Sue and Edgar Wachenheim III and by Fundación Almine y Bernard Ruiz-Picasso para el Arte.

PUBLICATIONS: The publication Picasso: Guitars 1912–1914 accompanies the MoMA exhibition. Synthesizing archival material and eyewitness accounts, the richly illustrated volume offers new insights into Picasso’s Guitars and the constellation of paintings, constructions, collages, drawings, and photographs that surrounded them in the studio at this breakthrough moment in the artist’s career and in the history of 20th-century art. Hardcover, 8 x 10”. 112 pages; 120 illustrations; 978-0-87070-794-0. $24.95.

In addition to the catalogue published in conjunction with the exhibition, MoMA will produce an e- book following the exhibition’s closing that will include contributions from MoMA curators and conservators and outside scholars. It will draw upon the unique opportunity provided by the exhibition for close examination of these radical Cubist works.

Guitar Innovators
February 16 and 23, 2011, 6:30 p.m.
Theater 3 (The Celeste Bartos Theater), The Lewis B. and Dorothy Cullman Education and Research Building
Tickets ($10; $8 members; $5 students, seniors, staff of other museums) can be purchased online or at the lobby information desk and the film desk.
Two evenings feature guitar soloists Marco Cappelli and Mamady Kouyaté (February 16) and Pedro da Silva and Kaki King (February 23). Organized in conjunction with the exhibition Picasso: Guitars 1912–1914, this program highlights the work of artists as innovative and singular in their approach to the sound of their instrument as Pablo Picasso was to the shape of his radical cardboard and sheet-metal Guitars.
Italian guitarist Marco Cappelli, a notable figure in the NYC avant-garde music scene, and creator of Extreme Guitar Project, presents a set that bridges traditional and contemporary repertoire with daring experimentation. Cappelli performs on several instruments including his classical guitar modified with the addition of 8 to 10 sympathetic strings.
West African guitarist and leader of Guinean dance band, The Mandingo Ambassadors, Mamady Kouyaté appears in a rare solo performance. Born into one of Guinea’s most prominent musical families and a former member of the legendary group Bembeya Jazz, Kouyate reworks old riffs and melodies onto the electric guitar with original flair, warmth, and virtuosity.
Eclectic and versatile Portuguese composer and guitarist Pedro da Silva composes in just about every style (contemporary classical, world, film, rock, jazz and electronic), plays 18 instruments, and teaches composition at the New York University. For this program, da Silva’s set includes his own intricate compositions for flamenco and Portuguese guitar.
Georgia-born, Brooklyn-based guitar player and composer, Kaki King, is most renowned for her stunning technique incorporating finger-picking, fret-slapping and percussive thumping. A dazzling performer, King has gained a reputation as one of independent music’s leading talents, earning her, among other recognition, Rolling Stone magazine’s coveted ‘Guitar God’ title in 2006.

AUDIO GUIDE: The accompanying audio guide features extensive commentary by Curator Anne Umland and Conservator Scott Gerson. MoMA Audio is also available for download on MoMA.org, on www.moma.org/wifi, and as a podcast on iTunes. MoMA Audio is available free of charge courtesy of Bloomberg.

WEBSITE: The exhibition will be accompanied by an original interactive website that enables visitors to explore the works included in the exhibition, together with audio from the Acoustiguide tour and interpretive texts. The site will also feature photographs of the artist’s studio and new audio commentary on the cardboard and sheet metal Guitar constructions from artists, scholars, and musicians, along with original videos produced by the Museum. The site will launch on February 13, 2011. MoMA.org/picassoguitars

ONLINE VIDEO: In conjunction with the exhibition, MoMA will be producing a series of web videos which will focus on the materials and techniques used by Picasso, along with the conservation of works on view within the exhibition. The videos will be made available via MoMA’s YouTube channel, www.youtube.com/momavideos, and via MoMA.org.

In his conceptually rigorous and often witty work, Berlin-based artist Henrik Olesen (b. 1967, Esbjerg, Denmark) investigates structures of power and systems of knowledge to reveal inherent logics and rules of social and political normalization. Olesen’s projects, based on in-depth research, have addressed a range of subjects including legal codes, the natural sciences, distribution of capital, and art history, and have taken the form of posters, fliers, text, collages, found-object sculptures, and spatial interventions. In past works, Olesen has compiled examples of “sodomy law” from around the world as testimony to the persistent criminalization of homosexuality; assembled a vast atlas of conspicuous and yet rarely acknowledged expressions of same-sex desire or affection in Western art history; and, most recently, created a historical and imagined portrait—in photo-text collages and sculptural objects—of British mathematician Alan Turing, who was persecuted for his sexual orientation despite his professional achievements and patriotic contributions. For Projects 94, Olesen presents a new site-specific work.