The fortunate circumstances offered Mamco to generously draw from the Fnac's collection is first the opportunity to present in Geneva artists never before exhibited. Furthermore to show diverse aspects of the works of artists already presented at Mamco. And finally an opportunity to enrich collections by an exceptional amount of long-term loans. 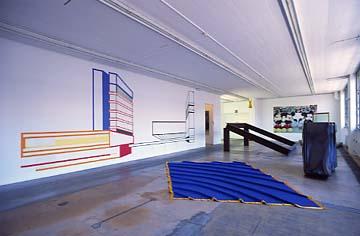 The fortunate circumstances offered Mamco to generously draw from the Fnac's collection is for us first the opportunity to present in Geneva artists never before exhibited. Furthermore to show diverse aspects of the works of artists already presented at Mamco. And finally an opportunity to enrich our collections by an exceptional amount of long-term loans.

But it also is an opportunity to pursue, from our critical point of view and within our museal perspective, an analysis of artistic and contemporary creativity. This new statement should therefore be read along the continuity of our activities, reason why French Collection is disseminated throughout the museum and spread, as is our practice, in monographic and polygraphic presentations where works of our own collections are maintained or introduced.

State collections that show such a wide international overture such as the Fnac's are uncommonly rare, a fact that deserves to be strongly stressed. Such xenophile singularity is also to be put in parallel to the low presence of French contemporary artists in foreign collections. An odd dissymmetry against which Mamco always attempted to define its policy with the calculated risk of limiting its attendance. Representations alter along with the displacement of canons and paradigms that are often nothing but a pseudo-rationalisation. The history of art cannot be durably written on the basis of non-thoughts that engender market preferences and pervading prejudices. It is therefore to a national institution's credit that it opened its collections towards an international horizon, i.e., in a spirit of general curiosity, freed from any nationalistic motives. A good many European collections would have noting to lose in drawing from this example.

More than two thirds of Mamco's space, from the fourth floor to the ground floor, is devoted to French Collection as a means to show our hospitality and express our gratitude. A way, also, to put our museum's identity to the test of a thorough mutation, as well as another opportunity to broaden even more the spectrum of our curiosity towards the art of the present, an epoch unlike any other - namely by the very fact that artists incessantly invent to enunciate it an extraordinary diversity of modes of expression.

Fnac organizes exhibitions of its recent acquisitions to familiarize the public with its collection; in 2002, for instance, the Grenoble, Nancy and Nantes museums presented a selection of its latest purchases. Several thematic photography exhibitions are organised each year in France or abroad. After Taipei and Seoul, the Moins et Plus show bringing together over 700 objects from the design collection will open at the Museum of Contemporary Art in Saint-Etienne at the Design Biennial. French Collection presented at Mamco in Geneva marks another stepping-stone in the diffusion of the Fnac's collection. Spread over two third of the museum's space, it will present monographic ensembles in conjunction with works connected to Mamco's history and concepts which has always presented and supported French contemporary creations. Works recently purchased by the Fnac will also be shown at Mamco for the first time : Olivier Blanckart, E Che Homo (1999); Peter Friedl, Corrupting the Absolute (2002); GÃ©rard Fromanger, De toutes les couleurs, peinture d'histoire (1991-1992); Martin Kersels, Loud House (1998); Malcolm Morley, Albatros sop with pup (2001).

Founded in 1976, the responsibility of the National Collection of Contemporary Art was entrusted to the French Delegation of Fine Arts (DÃ©lÃ©gation aux arts plastiques) in 1982. Fnac is the offspring of an institution created in the aftermath of the French Revolution with the purpose of acquiring works, on behalf of the State, from living artists. Fnac is not a museum. From the time of its inception, acquisitions were destined to be loaned exclusively to museums, mainly in the country's province, in national residences and palaces, in town halls, churches, ministries, embassies... During the past two centuries a collection of about 70'000 objects was assembled, of which 18'000 only are stored in a modern building built expressly for this purpose at la DÃ©fense, near Paris.

Acquisitions
Fnac's major mission is to assemble a living heritage, a witness of the multiplicity of contemporary artistic expressions in all types of art. With a budget amounting today to some 3.2 million euros, three purchasing commissions ("fine arts", "photography", "decorative arts, industrial creation") acquired more than 19'000 works over a period of twenty years. Renewed every three years, these commissions are composed of 4 or 5 administrative members plus 9 members active in the artistic field, including 2 artists; they ensure a collegial decision to proposals put forth by its members, galleries or artists themselves. For the past 20 years, the acquisition policy has revolved around three priorities : attention to new creation, purchase of essential works by confirmed artists to constitute a significant unity, and opening towards the diversity of current international art.

Loans and long-term loans
Fnac's second mission is to make its collection known. To achieve this purpose close to 2'000 works are loaned each year to more than 300 museums or cultural institutions in France or abroad. In addition, ever since the 19th century Fnac loans numerous works in museums and administrative buildings. A new law governing French museums provides that all long-term loans made before 1920 are to become the property of territorial collectivities. In view of the extended dynamic of its purchasing approach, Fnac is presently redefining its long-term loans policy regarding works of contemporary art in partnership with various museums, such as Grenoble, Saint-Etienne, Lyon, Bordeaux, Strasbourg, NÃ®mes, Marseille, Nantes, Rochechouart, Villeneuve d'Ascq, Tourcoing, Valence, etc., as State loans are essential to enhance their collection. They thus enable museums to constitute coherent ensembles centered on specific artists, movements or mediums, or to fill gaps in historical sequences. Far from taking over the responsibility of territorial collectivities, the State provides an active support benefiting both contemporary artists and the public. In future, foreign museums will also be able to benefit from long-term loans from the Fnac, Geneva's Mamco being its first foreign partner institution.

Publications
Fnac is also engaged in a new publishing policy intended to further the diffusion and apprehension of its collections. A series of modest or elaborated brochures and catalogues are published for each of its exhibition showing works drawn either from its own collection or from significant "dÃ©pÃ´ts". These publications are designed to open the public's awareness to proteiform ensembles one is rarely given to see put together, although everywhere present : thus the "Cahiers du Fnac" which enjoys a large circulation, whose NÂ° 2 is devoted to French Collection. Fnac is now on the internet: on the website of the Department of Culture and Communication (www.culture.gouv.fr) or on its own website (www.fnac.culture.gouv.fr), the latter showing the 650 works purchased in 2000 (technical notes and reproductions) and new acquisitions will be added to the site as they occur. At term, this new tool will provide a quick access to the contemporary collection.