Under the title Exposure, Martin Bilinovac presents an overview of his works from 2009 to 2011. The exhibited photographs show interiors - spaces void of human presence, in which the furnishings have been arranged in somewhat surreal constellations. The photographs investigate the relationship between space and perception, between thing and human being. 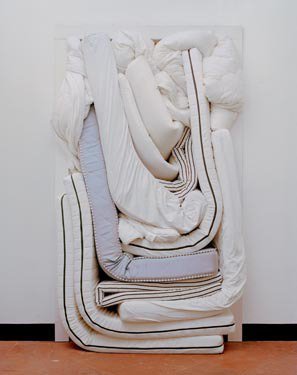 The FOTOGALERIE WIEN began the annual program in 2010 with a new exhibition format with the title SOLO. This new series of exhibitions dedicates one of the eight yearly exhibitions as a solo exhibition to a young emerging artist. It is to serve as a platform and springboard to artists who are at the beginning of their career, yet who already have an extensive body of work that can be presented to a broader public. The goal is to stimulate lasting awareness about the artist and his or her works. This includes our efforts to promote future SOLO exhibitions in cooperation with various institutions both nationally and internationally.

The second exhibition in this series, SOLO II, is dedicated to the works of artist Martin Bilinovac, born 1981 in Graz, currently living and working in Vienna and Linz. Bilinovac studied at the School for Artistic Photography Vienna (Friedl Kubelka), the University of Applied Arts Vienna, and the Academy of Fine Arts Münster.

Under the title Exposure, Martin Bilinovac presents an overview of his works from 2009 to 2011 at the FOTOGALERIE WIEN. The exhibited photographs show interiors – spaces void of human presence, in which the furnishings have been arranged in somewhat surreal constellations. The photographs investigate the relationship between space and perception, between thing and human being. Bilinovac’s spaces are set in generally strict, often symmetrical compositions and present objects in frontal directness, which at first glance refers to the immediacy of a snapshot. Yet after taking a closer look, the images have an unsettling effect – for example, when looking at a door barricaded with mattresses, the doorpost frames the scene serving as a second frame in the image, resulting on the one hand in a closed picture in picture, and on the other hand in the viewer’s detachment from reality. Consequently, Bilinovac succeeds in allowing the specific characteristics of photography to become apparent.

“We seek the absolute everywhere and only ever find things”, wrote German poet Novalis. To fathom the essence of things means to come ever closer to the “truth”. When a thing is taken from its original (functional) context or from our preconditioned sense of order and is placed in a different framework (for example, into art as with Bilinovac), its meaning expands, through altered reality, beyond its mere appearance and offers the occasion for intellectual contemplation. Photography, as a medium between being and appearing, gains a particular significance. In his works, Bilinovac explores the zones between reality and imagination, between the visible and the invisible all the while allowing us room for our own interpretations.