For this new exhibition Pruitt is presenting two new projects. His new series of paintings translates this season's IKEA wall art into lush oil paintings. Kinmont's sculptures and actions attempt to establish a personal relationship between the artist and the viewer, using the work as a mediator. 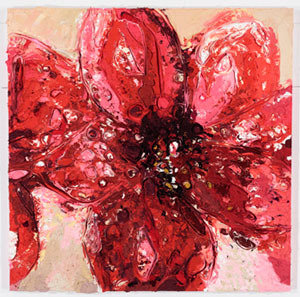 The title of Rob PRUITT's third solo show at Air de Paris is his name – just that and no more. Just as the celebrated, much sought-after, contemporary art trophy, the Rob Pruitt Art Award, also takes the artist’s name.

For this new exhibition PRUITT is presenting two new projects. His new series of paintings translates this season's IKEA wall art into lush oil paintings. IKEA takes the look of valuable art and makes it affordable; Pruitt brings this full circle by taking the mass produced IKEA items and making them unique. Taking a cue from Jasper JOHNS who in the 1950's used the found compositions of targets, American flags, and political maps of the United States as a location for luxurious paint application, PRUITT uses the "original" IKEA compositions as a starting point. The style of paint application varies from heavy impasto in the expressionistic style to a more refined photorealistic technique to something similar to the more humble skills of a pastry chef decorating a cake.

Among the oil paintings are anthropomorphic cardboard robots. The sculptures appear as if they had wandered into the exhibition, and stand before the paintings both bemused and contemplative. Their eyes are made of retrofitted shop-bought clocks with rotating pupils that scan the room. They clearly share DNA with historic works: RAUSCHENBERG's Cardboard series in 1971-1972, the crushed car works of John CHAMBERLAIN, and Jim HENSON's Muppets.

These surrogates for the gallery goer are made from recycling-ready, logo-bright cardboard boxes gleaned from the streets of New York and are a compressed litany of everything we consume as a society. You could easily call them grotesques.

In the storefront :
BEN KINMONT
Carl Andre killed his wife

Ben Kinmont (Born 1963 Burlington, Vermont, USA) is interested in interpersonal communication as a means of addressing the problems of contemporary society. His sculptures and actions attempt to establish a direct, personal relationship between the artist and the viewer, using the work as a mediator.
Simultaneously to his exhibition « Prospectus Paris » (Kadist, 2 avril – 1er mai), he shows his seminal work « Carl Andre killed his wife » at Air de Paris, that he describes :

They were both abusive to themselves , and he had spent so much time talking about accessible work. And, then, there was the issue of the family, as artists and if it was possible. Olivier Mosset first bought this piece ; but then, when Carl Andre gave money to Julian Prêto to help him during the last months of his life, Olivier wanted to trade the piece. He had also become friends with Carl in the meantime. I, too, was interested in how the piece meant to me now, having heard about Carl’s support of Julian. So the piece grew into new questions.

1988. plastic letters on a wall.
1995. notes added concerning pieces return and trade.
Project can not be repeated.
In 1988 Carl Andre was acquitted.