Tuesday-Sunday and Public Holidays 12 am-6 pm

Axell was an actress and newsreader, an icon in the French-speaking world; for many, her beauty made her a sex symbol. But in 1963 she brought her film and television career to an end, reversing roles to become a painter. Tal R's worlds are composed of innumerable abstract forms, so that the chaos the many colours and forms could be expected to produce is kept at bay. 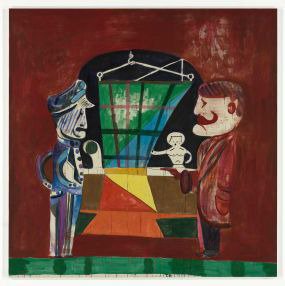 Evelyne Axell (1935-1972) was an actress and newsreader, an icon in the French-speaking world; for many, her beauty made her a sex symbol. But in 1963 she brought her film and television career to an end, reversing roles to become a painter. A key figure in Belgian pop art, she is among the artists whose work is just emerging from the shadow cast by male pop heroes for reassessment, for instance in the exhibitions "Seductive Subversion: Women Pop Artists 1958—1968" at the Rosenwald-Wolf Gallery of the University of the Arts, Philadelphia last winter or "Power Up—Female Pop Art" at the Kunsthalle in Vienna, as well in recent publications.

Axell experimented with various contemporary materials, combining plexiglas with enamel, with synthetic fur, foils, etc. to create substantively and visually seductive pictures. Her unusual material aesthetics combines mass-produced materials previously in advertising and industry rather than in the arts, which to some extent required considerable manual crafting. Axell used half-transparent plexiglas, painting sometimes on the front and sometimes on the reverse side in staggered compositions producing an interplay of transparent and opaque surfaces.

The principal figures are usually women, often nude and not infrequently
representing the artist―sometimes as a direct self-portrait, sometimes indirectly, where she posed for photos that provided the basis for her paintings. Her art thus revolves around her own person and the image of woman, and lays claim to an impetus for liberation. The self-chosen nudity affirms the pinup, rendering it a positive ex-pression of female sexuality and self-determination.

This is also the theme of the exhibition at the Kunstverein Hamburg, which shows a selection of later works from her very brief artistic career, which began in about 1964 and ended with her accidental death in 1972. Influenced by the 1960s and the social and political events of that period, her works penetrate taboo zones, compensating a new freedom that escapes all constraints imposed by the role of home-maker and by the stylisation of woman as the object of male desire.

As an institution for contemporary art, it is the task of the Kunstverein not only to show young art but also to place current art in its historical context, particularly in cases where what we consider an important position has long been neglected by general art historiography. For her time, Axell treated materials with remarkable freedom and had addressed feminist topics even before the advent of feminism. In times when the self-image is determined externally by advertising and other medial representations, her policy of self preoccupation is of enduring relevance.

The exhibition has been taken over from the WIELS (Brussels) and will later be shown in the context of a comprehensive presentation at the Museum Abteiberg (Mönchengladbach).

Tal R
The elephant behind the clown

Works—whether collages, drawings, or paintings—by the Israeli-Danish artist Tal R (*1967, lives in Copenhagen) are characterized by the sheer quantity of elements and meanings they present. His complex visual worlds are composed of innumerable abstract forms together with representational figures in a balanced relationship, so that the chaos the many colours and forms could be expected to produce is kept at bay. The pictures are structured in keeping with an inner logic and make a light and carefree impression. The artist describes it as "wild minimalism without Puritanism". The point of departure for this painted universe of images are not so much precise preparatory sketches but complex sentences the artist composes in his head. In words he describes the happenings on the canvas and the future picture before carrying it out. However, this transformation process should not be thought of as a visual one-to-one translation. He tries rather to come as close as possible to language—its structure, phonetics, and ambiguities—on the visual level.

But his works "speak" without concrete written characters and develop their own narration, which cannot be fully read by the viewers. The graphic compositions unite cultural references from foreign cultures, myths, and our everyday world, and open up a broad spectrum of interpretation. Not everything can be learned in detail, much is merely hinted at and points in various directions. In recent works, for example, motifs from the circus, the theatre, or oriental tales repeatedly appear. Places and situations are associated with the dream worlds of earliest childhood, which give much scope for one's own fantasy and for playing with identities. At the bottom of the picture runs a coloured bar providing the stage for what is happening in the picture and a border for the formal organisation of the surface. It forms a calm basis for the wild spectacle that unfolds above.

Tal R takes his ideas from a range of everyday sources, such as periodicals, publications, and films. The collage is often the appropriate technique. It makes it possible to preserve widely ranging elements in their own materiality-paper, photos, rags. The formal discourse, however, always takes place in relation to the canvas. Tal R sees himself quite consciously as a painter who plays with the variations and possibilities that painting offers. For the current complex of works from the past two years that are on show at the Kunstverein Hamburg he has used a mixture of rabbit-hide glue and various pigments, which, sometimes supplemented by wax chalk, he applies directly to the canvas. Since the glue dries quickly, a specific idea of the final result is required. What has once been "painted" cannot be changed. The paint is applied very thinly and flatly, brushstrokes are not apparent. The works lack the special style, the aura of oil painting owing to the dry and rough surface.

The Kunstverein Hamburg is presenting the some 20 works in a newly erected pavilion on the first floor. This creates a "space in space" situation for the circa 2.50 m x 2.50 m canvases, which intensifies the meeting with the works. The artificially reduced space imposes a closer encounter than would take place in the full space of the exhibition rooms. Confrontation with the overdimensioned formats cannot be avoided.