Cellule. As in her previous video works,the artist, whose works are analogue, built a model of the house for Cellule that functions as a modular, portable space imbued with streaks of color. Cellule is inspired by the novel A rebours, written by Joris-Karl Huysmans. 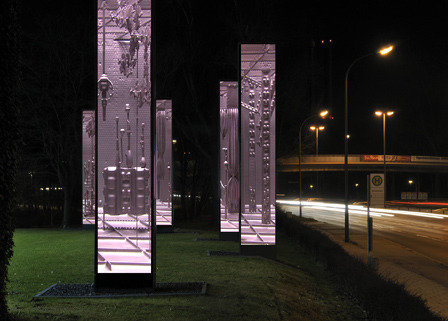 In its fifth year, this art platform in public space has become a distinctive feature of Munich’s cityscape. Beginning on 17 May it will host a new installation with a work created by the internationally recognized video artist, Saskia Olde Wolbers, whose artistic works operate on the borderline between reality and imagination, creating a surreal world of suggestive beauty.

Cellule is inspired by the novel, À rebours (Against the Grain), written by the French writer Joris-Karl Huysmans in 1884: The novel describes how the noble protagonist retreats into the isolation of his own four walls and, thus, into his own imaginative world. The home of the ailing aristocrat Eremit is the setting of Olde Wolbers’ video. As in her previous video works, the artist, whose works are analogue, built a model of the house for Cellule that functions as a modular, portable space imbued with streaks of color. The duke’s cell, a refuge from the coarseness and banality of everyday life, is the central motif of inner projections and is staged by Olde Wolbers in dramatic contrast to the SEVEN SCREENS’ surroundings. She counters the hectic traffic and the fleeting human presence with surreal contemplative images that give the viewers the option of filling the open space with their own imagination.

Saskia Olde Wolbers
Born in 1971 in Breda, The Netherlands, the artist studied at Central Saint Martins College of Art and Design in London (1989), the Rietveld Academy Amsterdam (1990) and at the Chelsea College of Art and Design (1996). She has been awarded various prizes including the Prix de Rome Film & Video (2002), Baloise Art Prize, Art Basel (2003) and Beck’s Fu- tures (2004). The subject of numerous solo exhibitions, her work has been presented in im- portant international institutions, such as the Vienna Secession (2011), Mori Art Museum, Tokyo (2008), Maureen Paley, London (2007), the Stedelijk Museum in Amsterdam (2006), South London Gallery (2005), the Kunsthalle St. Gallen, S.M.A.K. in Ghent (both 2004) and the Tate Britain (2003). Her work was most recently presented in Germany at the Sammlung Goetz, Munich, and in a group exhibition in the Kunsthalle Wilhelmshaven (both 2010). Sas- kia Olde Wolbers lives in London.

Since 1966 OSRAM has exhibited contemporary art. These activities were expanded in 2001 to include the creation of a corporate collection of contemporary art. The art historian Dr. Christian Schoen is the director of OSRAM ART PROJECTS and the curator of SEVEN SCREENS.

OSRAM (Munich, Germany) is part of the Industry Sector of Siemens and one of the two leading lighting manufacturers in the world. Sales for the 2010 fiscal year totaled 4.7 billion Euros. OSRAM is a high-tech company in the lighting industry: over 70 percent of sales come from energy-efficient products. This global player employs nearly 40,000 people worldwide, supplies customers in some 150 countries and has 46 production facilities in 17 countries (September 30).