Following her powerful and widely influential RMB City Series (2008-2011), Play Time returns to Cao Fei's previous interest in the convergence of fantasy and reality and premieres her latest works. She continues to utilize different types of media including video, photography and sculptural installations that evoke childhood games, story telling and TV programs that have a profound influence on children. 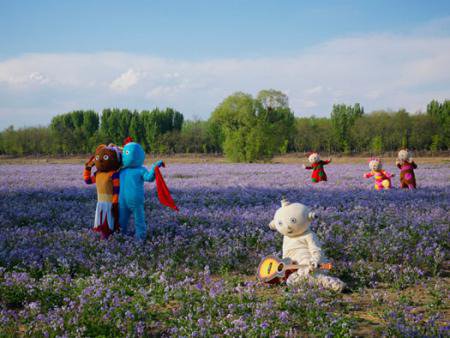 For her fourth solo exhibition at Lombard Freid, Cao Fei's recent exploration into the theme of "play" has multiple connotations; "Play Time" is layered with ambiguities. Does it relish a time of game planning and exhilaration, or an onstage performance? This exhibition leaves viewers with no clear-cut answers, but rather with ideas and associations of different dimensions.

Following her powerful and widely influential "RMB City Series" (2008-2011), "Play Time" returns to Cao Fei's previous interest in the convergence of fantasy and reality and premieres her latest works. She continues to utilize different types of media including video, photography and sculptural installations that evoke childhood games, story telling and TV programs that have a profound influence on children.

With "Shadow Life", a work composed of three distinct narrative sequences Cao Fei invokes the days of childhood. The narrative draws upon the remembrance of a Chinese Spring Festival Gala celebration that ran on China's official Central Television. The composition creates images, at once real and imaginary, that emerge as light is cast across various forms and gestures of the human hand. Each chapter, "A Rock", "Dictator", and "Transmigration", have different stories to tell. They flash with the colour of fairy tales, oriental life philosophy, as well as particular social and political references. A mysterious quality is knotted within the intricacy of the hand gestures and this mystery unsettles the viewer who cannot help but yearn for the connotations that lurk behind these childlike movements.

The two other works, the short video "East Wind" and photography series "PostGarden", draw upon various icons of popular culture and cartoon imagery. The original Thomas the Tank Engine in "East Wind" and CBeebies from "PostGarden" are characters from cartoons shown on the BBC in the 1980s and 2002 respectively. These characters successfully transcended languages and borders and were broadcasted all over the world. In Cao Fei's work, they have been placed in a very different context.

In "East Wind", the charmingly naive smile of Thomas, the British cartoon train engine, is superimposed on the front of a Chinese-manufactured Dong Feng truck (literally "East Wind" truck), which barrels across urban highways and overpasses with a single mission: to deliver refuse from a construction site in the city to a trash dump on its outskirts. The title of this work has clear historical overtones centring on Mao Zedong's famous declaration that the east wind prevails over [the] west wind. This statement is associated with Mao's so-called Third Front strategy, which sought to protect China from invasion by foreign powers by building industrial installations in western China. China's "East Wind" (Dong Feng) automobile was founded in 1969 as a part of this campaign. But today, as this Western face is married to the Dong Feng truck, the power relationship between the two take on an indeterminate quality, just like the plight and pattern we see in the real world. Not unlike Cao Fei's previous works, this short film mixes social commentary, popular aesthetics, references to Surrealism and documentary conventions, playing out a number of metaphors amongst them.

With a playful spirit, Cao Fei's appropriation of popular culture symbols also harbours an attitude of resistance to the ideologies and value systems they represent. The photography series "PostGarden" transplants the CBeebies of the BBC from their garden paradise as they search for another world. The work is full of thrills, like a game of eye spy. Each diptych is composed of two pictures very similar in form where the viewers are challenged to spot the differences between the two. Compared to Cao Fei's previous pictorial photography series Cosplayers (2004), "PostGarden" lingers in factual space, but is already dissociated from physical images with concrete referential meaning and is far removed from the civil landscape. Cao Fei has used contemporary Chinese elements sparingly, thereby creating a pure context. The work is like a parable told by a mother to her child. Cao Fei preserves a limited sense of factual reality, creating a place that cannot be distinguished clearly and in the process expanding the conceptual space of her own work.

With a reconstituted urban model, Cao Fei's installation work, "Play Time" perpetuates the open space created in RMB City, which offers a mode and mentality for more people to enjoy and participate in. In this fingerboard skate park sculpture, the buildings that Cao Fei uses as references come from all over the world. They are all charged with authoritarian and mystical connotations and take the form of some sort of belief. In this rapidly modernizing world, there are fewer and fewer buildings representative of ancient civilizations. Nonetheless, their core spirit never disappeared and therefore they still need to be dissolved. By simply sliding one's fingers over the skateboard and travelling across the inclined surfaces and domes of these buildings, viewers may just be able to reach that objective.

Each work in this exhibition resonates with Cao Fei's previous works from a different angle and realizes a move forward and displacement on the basis of life experience and perception, in which her identity as a mother is critical. That is to say, the sensation of her works is not conceptual, but rather reflects an accumulated energy of life experiences. The latter shapes her observation to this world and her interpretation on the power and relationship in the age of globalization, as well as the realities, details and mysteries of being. Through this process, she imagines the possible forms of freedom and seeks an open dialogue with the viewer.