In his work as an artist, musician, and composer, Stephen Prina appropriates the works of other artists; by translating the materials into different media, Prina thus generates complex systems of reference in which personal, art historical, and media-based narratives fertilize one another. Since the mid 1990s Olde Wolbers has been making fictionalised documentaries that hover somewhere between illusion and reality; her surreal-bizarre stories are charged with a combination of dream-like image worlds. Using an ordinary inkjet printer Wade Guyton reproduces nonfigurative compositions on linen or paper. 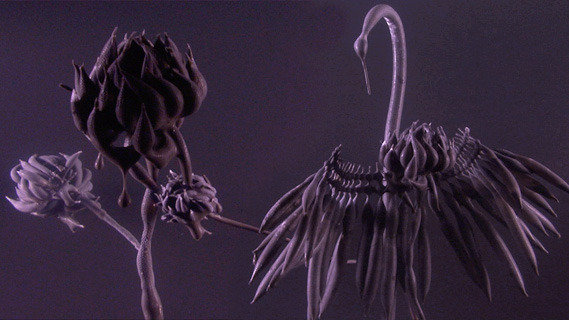 Stephen Prina
As He Remembered It

In his work as an artist, musician, and composer, Stephen Prina appropriates the works of other artists. At the Secession that means the fitted furnishings from two no longer existent houses by R. M. Schindler built in Los Angeles in the early 1940s for Hilaire Hiler and George (Rose) Harris. Based on photographs and the original designs, Prina had the pieces reconstructed and then used them as a "canvas" for his monochrome painting. Following a grid designed specially for the purpose, he restages them in the exhibition space. By translating his materials into different media, by varying and recontextualizing them, Prina thus generates complex systems of reference in which personal, art historical, and media-based narratives fertilize one another.

"Sometime in the early-to-mid 1980s, Chris Williams and I found ourselves on La Brea Avenue in Los Angeles late one night. From across the street, we could see a spotlighted, pink object showcased in a storefront window, but, from our vantage point, we could not identify it. We crossed the street to gain a closer look. Conveniently, a label describing the object as a piece of furniture by R. M. Schindler was on display. Clearly, this desk that had once been built-in had been pried out of its surroundings with the attempt to render it freestanding. However, it appeared to us as an amputated limb." (Stephen Prina)

Saskia Olde Wolbers
A Shot in the Dark

Since the mid 1990s Olde Wolbers has been making fictionalised documentaries that hover somewhere between illusion and reality. Her surreal-bizarre stories are charged with a combination of dream-like image worlds and a level of storytelling that oscillates between soliloquy and monologue. The tales the artist tells are based on information she has taken from news, documentary films, and everyday conversations. The off-screen narration of her audio-book-like soundtracks accompany real-time sequences of model worlds meticulously assembled by hand. Olde Wolbers dips them in paint and places them in aquaria, in this way breathing a kind of virtual life into the deserted, unpeopled landscapes and mysterious objects, a life that manifests itself in strange undulations and bubbling.

The Secession will be showing a selection of the artist's work for the first time in Austria including her fictionalised tale Pareidolia (2011).

Wade Guyton leaves his art to chance. Using an ordinary inkjet printer he reproduces nonfigurative compositions on linen or paper. He develops his abstract formal vocabulary with the aid of the standard text and graphics programs on his computer and then leaves it to the quirks of his printer to intensify the effect. His work is hence characterized by tears and creases, an uneven distribution of ink, smudges, or missing lines. With each new printout the question of authorship literally becomes more blurred, time and again reopening the discussion about modernism.

In the Grafisches Kabinett Guyton shows an installation with small-format works, so-called "drawings," thus adapting his artistic methods to fit the conditions of this exhibition room at the Secession. He produces his reduced formal vocabulary on pages taken from art, architecture, and lifestyle magazines, tearing out and overprinting apparently random pages that happen to fall into his hands. Working in this way Wade Guyton weaves together a fascinating network of reference systems, which must always bear some relation to the "real" world if they are to achieve any kind of permanence.