With the project 'COHAB: an assembly of spare parts' at Casco, Can Altay proposes to reassess - and reanimate - the public sculptures in light of his long-term inquiry into "cohabitation" in urban life, particularly by focusing on the clashes and overlaps between decisions of "placing" and "living with" artworks in public space through specificities of the city of Utrecht. 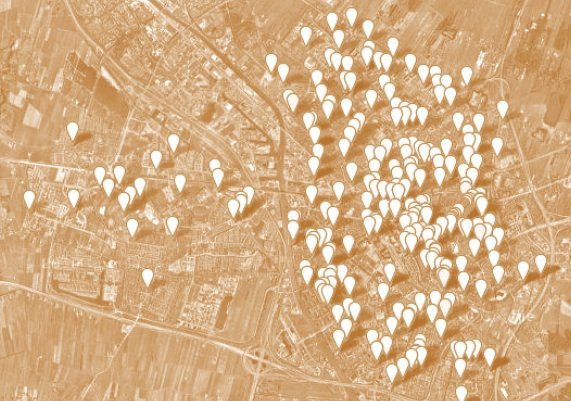 In recent years, the so-called genre of “public art” has undergone a dematerialisation process. As the public sphere has been understood increasingly in terms of a heterogeneous and agonistic discursive state, the emphasis has shifted to public art’s communicative and relational functions. In this course of development, public sculptures are seen as rather archaic or, one could say, simply unseen, folded in the zone between buildings and urban infrastructure.

With the project ‘COHAB: an assembly of spare parts’ at Casco, Can Altay proposes to reassess – and reanimate – these urban objects in light of his long-term inquiry into “cohabitation” in urban life, particularly by focusing on the clashes and overlaps between decisions of “placing” and “living with” artworks in public space through specificities of the city of Utrecht. By ‘COHAB’, which sounds like rehab, Altay refers to cohabitation as a fundamental political problem, not simply a celebration of adherence or adaptation. ‘COHAB’ can be understood as a call for an assembly of all things that constantly make up the city or that are made up in the process, including those spare parts like us, people, like detritus and abandoned objects, like the sculptures that call for and create further assemblies, as a process of recovery.

The project’s research draws upon public information and archives around the sculptures and monuments of the municipality of Utrecht. In collaboration with local stakeholders, passersby and researchers, ‘COHAB’ also looks further into particular – and controversial – cases such as ‘Tenttoren’ in the Lunetten area or the Barry Flanagan statue ‘Thinker on a Rock’ in the city centre. The empirical and imaginative case studies that were assembled during Altay’s research process disclose multiple attentions, voices and initiatives around public art works. The project repositions them somewhere between function and meaning and also treats them as points to draw the city’s boundaries and its anamorphic expansions. The research material finally “cohabits” with a special display structure and is accompanied by a small set of proposals for repurposing public sculptures in Utrecht throughout the project period.

For ‘COHAB’, Casco acts as an assembly point. An array of research materials and stories as well as (imaginative) maquettes, models or objects are available on especially constructed trestle and table structures, shaped after typical post-war housing blocks. It will provide an overview and encourage interpretations of relations between art, space and inhabitants. Eventually all of these constituents will build up towards opportunities to intervene and/or contribute to the ways in which different stakeholders place and live with art in public space.

The work of Can Altay, an artist living in Istanbul, is known for its focus on improvised architectures in the city, unauthorised systems of organisation and models of co-habitation. The artist, who is living in Istanbul, has been working on a long-term project, ‘setting a setting’, which searches for a collaborative, productive method of exhibition making. Altay’s project at Casco is part of a sequence following ‘The Church Street Partners’ Gazette’ (CSPG) which he developed with The Showroom in London. A book that will combine ‘CSPG’ and ‘COHAB’ will be published by Bedford Press in collaboration with Casco and The Showroom later this year.

This project is also realised as part of Circular Facts, made possible with support from the European Commission.

COHAB’ first event centres around the 1971 film by Jef Cornelis, Belgian author of numerous films made for TV, ‘Sonsbeek buiten de perken’ (Sonsbeek Out of Bounds) (1971, 47:50 min), featuring an exhibition held at Sonsbeek Park, Arnhem in 1971. The film “constitutes a collection of conflicts” (Koen Brams) around the exhibition, presenting different opposing voices from artists of the BBK national artists’ association, participating artists, exhibition organisers, local politicians etc. on the public values of art, especially outside of exhibition spaces.

A number of special guests whose works involve making and/or placing “public art” in Utrecht and the Netherlands have been invited to respond to the film and engage in discussion. Starting with the screening, the discussion will follow several leads: the contradictions of “public art” and its role in the neo-liberal era of city marketing and gentrification; changing intentions and aims in cultural production; the position of the public, the audience and the random passersby; shifts that may have taken place in policy-makers’, artists’ and audience’s positions. All these leads are seen through the specific lens of Dutch “public art” practice.

Continuing from the first discussion, this event will zoom into the duality between the act of placing a monument or permanent sculpture versus more temporary interventions in public space—interventions that are subject to conflict and negotiation just as much as "permanent" sculptures. A temporary action will be undertaken as a contribution to and intervention in an existing urban structure in Utrecht. The subsequent discussion will investigate the relation between material objects and temporal (and temporary) events in urban space. It will also consider the so-called “durational approaches” (Paul O'Neill). How do artists articulate their positions and responsibilities within the formal and political process of making “public art”? And how are inhabitants, who are subjected to art in public space, affected in their everyday experience of the city? What about an art space in the broad context of urban space?

After the exhibition is closed at Casco, ‘COHAB’ appendix extends the project by organising ‘Rogue Game’ in which both the players and observers explore together the notions of territory, governing rules, negotiation and contingency through an understanding of play and spatial research.

‘Rogue Game’ is an ongoing and collaborative project devised by artist Sophie Warren and architect Jonathan Mosley in collaboration with Can Altay. The game brings together three different sports (5-a-side football, basketball and volleyball) staged simultaneously on the same pitch, each game played according to its own rules. Through the simple overlaying of time the event throws the players into unknown territories within established frameworks for play. Known rules are exchanged for new ever-changing rules.

Open call for participation!
Please contact us if you would like to join this game or to learn more about it.

For more information on the programme, please contact Yolande van der Heide at yolande@cascoprojects.org or call 030 231 9995