The Anatomia Metamorphosis project is focused on three exceptional Czech creators of Art Brut. For the exhibition a unique collection of works has been chosen, which include new, hitherto unexhibited drawings and collages by Lubos Plny, while alongside Anna Zemankova's key works there are also several unknown drawings. Frantisek Dymacek is receiving his world premiere at MuMo. 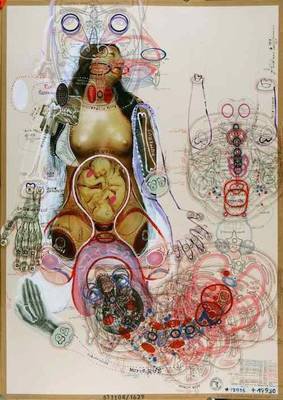 The Montanelli Museum in conjunction with the ABCD association has prepared the first of a planned cycle of exhibitions of art brut. ABCD has already presented the French collection of art brut abcd (2006), as well as the legendary Prinzhorn collection (2009).

For the exhibition a unique collection of works has been chosen, which include new, hitherto unexhibited drawings and collages by Luboš Plný, while alongside Anna Zemánková's key works there are also several unknown drawings. František Dymáček is receiving his world premiere at MuMo.

The French painter and collector of non-professional art, Jean Dubuffet defined art brut thus: creative production of all kinds – drawings, paintings, embroidery, modelled or worked sculptures, etc., which embody spontaneity and great inventive imagination and are perhaps the least assessable of all standard art and cultural patterns. Authors of art brut are unknown persons completely removed from professional artistic circles... We are here witnesses to a totally pure, raw artistic activity, which in its entirety and in its individual phases emanates exclusively from the author's own stimulus.

The creations of each exhibited artist are original, solitary, unique. Despite this it is possible to trace a certain intrinsic mutual continuity. The artistic projects of all three authors are united by the same fixed idea: Zemánková, Plný and also Dymáček – each in a very particular manner – all reflected on their corporeality and in their output yielded to its manifold anatomical metamorphoses.

For Luboš Plný (1961) creative manifestation is a scientific project. The great majority of his ink drawings are anatomical self-portraits and in many cases they are filled in with acrylic paint and collages. In them he records the results of the experiments he performed upon his own body. The body is depicted in tomographic cross-sections, with every layer painstakingly recorded. His great inspiration was the birth of his son Vincent (2005), which became a pivotal theme in his later works.

Given that Luboš Plný exposes the insides of the human body quite explicitly, Anna Zemánková (1908 – 1986) only reflected her corporeality in a subconscious way. She concealed organic shapes evoking the physiological processes associated with motherhood among spectacularly beautiful floral motives, masking them with thousands of details. She conceived a fantastic herbarium of alien plants, more beautiful than nature itself created. Her pastel drawings were sometimes supplemented with crocheted applications or else she perforated them. Her work was purely intuitive, automatic.

František Dymáček (1929 – 2003) also worked spontaneously, his creative process and morphology are reminiscent of the drawings of spiritist mediums. With ballpoint and felt-tip pens he generated dynamic organic structures in primary colours, evocative of accumulated cells or cross-sections of bodily organs. Dymáček's drawings are cartographies of his mental space, labyrinths watched over by demons who peer out from the maze of what initially seem to be his decorative arabesques.

The confrontartion of all three authors warrants us to read into the covert sub-texts in their works: Plný's aesthetic dimensions, Zemánková's sexual aspect and the physiological elements present in Dymáček.

Three catalogues in three languages (Czech-German-English) has been published for the occasion of the exhibition.