Formed in 2006, IOCOSE is an art collective based throughout Europe. Its four members present in this new solo exhibition some of the possible applications of their art works in a domestic environment. 'Domestic Standing Ovation' displays an ideal living room where the aforementioned works all contribute to create a warm and welcoming atmosphere. 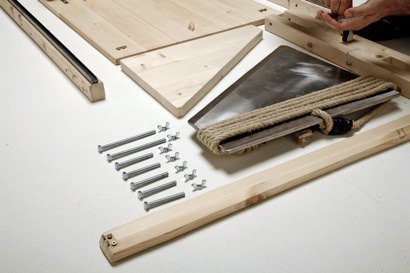 An IKEA guillotine, a religious hi-tech machine set to give electric shocks, instructions for a drug recipe based on floppy discs, and finally a BBC special edition on the death of pop star Madonna. This is only part of IOCOSE's arsenal: a collection of projects, works and actions designed to shock and disturb.

Formed in 2006, IOCOSE is an art collective based throughout Europe. Its four members will present in this new solo exhibition some of the possible applications of their art works in a domestic environment. “Domestic Standing Ovation” displays an ideal living room where the aforementioned works all contribute to create a warm and welcoming atmosphere. More than an exhibition, this will be an invitation to re-furbish your house according to the suggestions of the artist quartet.

“In the Long Run” (2010) is a video of the media coverage of a not-yet-happened high-profile media event. As a reconstruction of a future event, it investigates to which extent media narratives are scripted and structured on a shared frame. An obituary prepared in advance, a false story, but also very likely, and definitely a catalyst for endless narratives and interpretative developments. Winner project of the International Arte Laguna Prize 2010 / Video Art Section, Venice, Italy.
http://www.reakt.org/in_the_long_run

“Sokkomb” (2009) is an IKEA guillotine. This deadly piece of furniture is the ideal product for home-made justice. Produced in collaboration with “Falegnameria Sociale”, the hand-crafted guillotine provides a cheap and reliable solution for your daily struggles against immigrants, thieves, and whoever might annoy you.
http://www.iocose.org/works/sokkomb

“Empathy Box” (2008) is a domestic machine designed by the imaginary Bureau of United Religions. It supposedly frees the empathic feelings of the practitioner by sending an electric shock. Practitioners are supposed to gather and touch the Empathy Box while holding their hands and forming a chain. The share of pain will instantaneously free their souls.
http://www.iocose.org/works/empathy_box

“Floppy Trip” (2009), finally, is a drug where floppy discs are the main ingredient. This hallucinogenic drink invites to recycle unused technologies for new, unpredicted effects. Easy to prepare, cheap and perfectly legal, Floppy Trip is the new frontier in recycling and the ideal drug for the masses.
http://www.iocose.org/works/floppytrip

IOCOSE has exhibited and presented at the Venice Biennale, Jeu de Paume in Paris, Tate Modern and HTTP Gallery in London, Re:akt! in Slovenia and the Influencers festival in Barcelona. The group organizes actions in order to subvert ideologies, practices and processes of identification and production of meanings. It uses pranks and hoaxes as tactical means, as joyful and sound tools. IOCOSE thinks about the streets, internet and word of mouth as a battlefield. Tactics such as mimesis and trickery are used to lead and delude the audience into a semantic pitfall. http://www.IOCOSE.org

Thanks: Bani Brusadin / Festival The Influencers

Supported by The Ministry of Culture of the Republic of Slovenia and the Municipality of Ljubljana
Sponsor: Datacenter d.o.o.

IOCOSE will also present their work in form of a multimedia lecture at the
MMC Pina, Kidričeva ulica 43, Koper, Slovenia on THU, June 16, 2011 at 8 pm