The Power of Fantasy

Modern and Contemporary Art from Poland. More than 30 internationally renowned artists such as Monika Sosnowska, Wilhelm Sasnal, Piotr Uklanski, Katarzyna Kozyra, and Robert Kusmirowski featured in the show. With works of art which explore the full potential of the imagination, the show reveals a culture full of intense visions and strange dreams. The exhibition puts contemporary artworks in the company of iconic masterpieces by celebrated artists like Tadeusz Kantor, Magdalena Abakanowicz and Bruno Schulz. 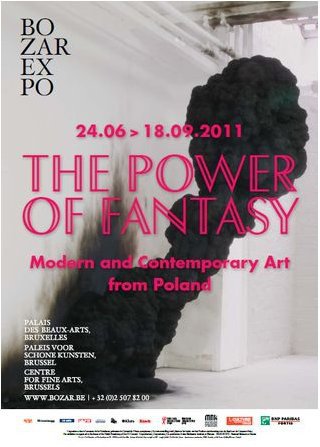 This major exhibition gathers many of the most significant works of contemporary art from Poland by a generation of artists who have made their careers since the fall of communism in the country in 1989. More than 30 internationally renowned artists such as Monika Sosnowska, Wilhelm Sasnal, Piotr Uklański, Katarzyna Kozyra, and Robert Kuśmirowski featured in the show.

Entitled ‘The Power of Fantasy’, the exhibition sets out to show how the fantastic and the magical, the mad and the absurd have been powerful themes in contemporary Polish art. With works of art which explore the full potential of the imagination, the show reveals a culture full of intense visions and strange dreams.

These themes also provide connections between 20th century modern art in Poland and the practice of contemporary artists since 1989. The exhibition puts contemporary artworks in the company of iconic masterpieces by celebrated artists like Tadeusz Kantor, Magdalena Abakanowicz and Bruno Schulz.

In total, The Power of Fantasy features almost 200 works of art, some especially commissioned for this exhibition including a work of wall art being made in situ by street artist, Mariusz Waras. Other major works are being shown outside Poland for the first time. The Power of Fantasy is the most comprehensive exhibition of contemporary Polish art since the end of communism.

The artworks are not ordered by chronology, but are organized thematically in different chapters. Key themes include absurdity in everyday life; history and memory; the image of the hero; madness and absurdity; surreal landscapes; the militant imagination; the art of saying no.

Fantasy takes a variety of forms. In the work of neo-surrealist painter Julian Jakub Ziółkowski as well as the Baroque filmic fantasies of Katarzyna Kozyra, it is conveyed in feverish excess. For other artists, it is the former socialist environment – much disparaged in the popular imagination – which has power to stimulate the imagination. As art, ordinary towns and streets can become a magic world containing many overlooked possibilities and unfulfilled potential. Concrete housing blocks and public buildings become playgrounds of the imagination in the work of Monika Sosnowska, Julita Wójcik and Jarosław Kozakiewicz.

For this generation of artists, like others before them, fantasy has not been a way of escaping reality but of challenging it. Largely born in the late 1960s and 1970s, they have crossed two worlds: their childhoods and youth were lived in the People’s Republic of Poland, whilst their careers have been made in democratic Poland. Their work is inflected by a contrarianism that cast doubt on both. In this way – artists like Artur Żmijewski and Zbigniew Libera – sustain a tradition of dissent and critical reflection which is deeply-rooted in Polish culture.

Polish artists are deeply interested in the ways in which history can be folded into the present. Robert Kuśmirowski’s iconic work, ‘DOM’, a C19th graveyard will be recreated in the show. The exhibition also features a room of works of Wilhelm Sasnal – one of the greatest painters of the age – addressing the figure of the hero.

The fantastic can also be shaped out the ordinary. Hardship, bureaucracy and censorship have not been entirely negative experiences for Poland, at least in the sense that they have stimulated a remarkable resourcefulness in the nation. Poles have a talent of being able to make anything out of nothing. In the 1950s Leopold Tyrmand writing called this capacity ‘Applied Fantasy’. Today artists continue to tap this resourcefulness: Paweł Althamer works with the elderly neighbours and teenage ‘homeboys’ from Bródno, an unloved suburb in Warsaw, to create art or as he calls it a ‘wspólna sprawa’ (‘common task’). A monumental sculptural collective self-portrait, ‘Bródno People’, made by Althamer and his neighbours will feature in the exhibition.

Other young artists demonstrate extraordinary, even perverse resourcefulness. Jan Simon, for instance, combines approaches technology like a craftsman, making electronic objects from scratch. Maciek Kurak has commented on the talent for ‘Applied Fantasy’ in a piece called ‘Fifty-Fifty’ in which a Polish FIAT car – on its back – seems to drive a sewing machine.

The exhibition is accompanied by 160 page, fully illustrated book published under the same title from Prestel.