'Images of War (at a Distance)' marks the first comprehensive solo exhibition of Berlin-based artist in a United States museum, and features the U.S. premiere of Serious Games I-IV (2009-10), a four-part video installation at the center of the exhibition. The exhibition reflects a recent large-scale acquisition of 36 artworks, a body of work spanning four decades and including nearly all of Farocki's videos, video installations, and films in video format. 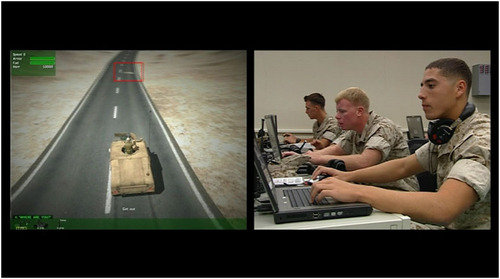 Harun Farocki: Images of War (at a Distance) marks the first comprehensive solo exhibition of Berlin-based artist Harun Farocki (b. 1944, German-annexed Czechoslovakia) in a United States museum, and features the U.S. premiere of Serious Games I– IV (2009–10), a four–part video installation at the center of the exhibition. The exhibition reflects a recent large-scale acquisition—realized as a joint effort by MoMA’s Department of Media and Performance Art and Department of Film—of 36 artworks, a body of work spanning four decades and including nearly all of Farocki’s videos, video installations, and films in video format. On view from June 29, 2011, to January 2, 2012, in The Yoshiko and Akio Morita Media Gallery, Harun Farocki: Images of War (at a Distance) is organized by Sabine Breitwieser, Chief Curator, and Erica Papernik, Curatorial Assistant, Department of Media and Performance Art, The Museum of Modern Art.

Galvanized by the international student protest movement of the late 1960s, Farocki developed an experimental documentary style integrating his own material with footage appropriated from a range of sources, including mass media, surveillance, and political propaganda. In the past several years, he has translated his essayistic approach to the gallery environment. The focal installation Serious Games I–IV, comprising the four video installations I: Watson is Down (2010), II: Three Dead (2010), III: Immersion (2009), and IV: A Sun with No Shadow (2010), positions video game technology within the context of the military, where it originated.

The work juxtaposes real-life wartime exercises with virtual reenactments to question the fundamental links between technology, politics, and violence. Serious Games I–IV is contextualized by works representing a significant portion of Farocki’s oeuvre—including such integral works as the early agit-prop film Inextinguishable Fire (1969); Videograms of a Revolution (1992), a collaboration with Andrej Uijca; and Farocki’s most recent work, The Silver and the Cross (2010)—displayed on several monitors within the gallery. Furthermore, visitors can browse some 32 works by the artist and gain a comprehensive overview of his practice at three interactive viewing stations.

The adjoining Projects Gallery features I Thought I Was Seeing Convicts (2000) and the trilogy Eye/Machine I–III (2001–03), both on view from June 29 to October 17, 2011. I Thought I Was Seeing Convicts draws connections between the role of surveillance in everyday consumer culture and prison life, directing viewers’ attention to the fatal shooting of an unarmed prisoner by a guard at a maximum-security penitentiary in 1989, an event that was caught on camera. In Eye/Machine I–III, Farocki collects images from military and industrial surveillance devices to explore the increasingly complex relationship between humans and intelligent machines.

Also a writer, editor, and film theorist, Farocki investigates the processes through which images and the messages they carry are constructed, transmitted, and perceived, as well as the ability of recorded images to convey the realities of war. A selection of publications featuring texts by or about the artist will be available within the exhibition gallery, allowing visitors to engage the various dialogues that have taken shape around Farocki’s work as well as his indelible impact on film criticism and theory. Critiquing the double-edged nature of time-based media—as historical documentation and a tool for manipulation—Farocki continually reevaluates the impact of mass media on society.

About the Artist
Born in German-annexed Czechoslovakia in 1944, Harun Farocki studied at the German Film and Television Academy Berlin (West) from 1966 to 1968, and emerged as a filmmaker during the international student protest movement. Over the past four decades he has produced more than 100 films, videos, and installations. From 1974 to 1984 he was the author and editor of the journal Filmkritik in Munich. From 1993 to 1999, Farocki was a visiting professor at the University of California, Berkeley, and since 2006, he has been full professor at the Academy of Fine Arts, Vienna. Since 1996 Farocki has had numerous group and solo exhibitions in museums and galleries throughout the world.

From Guerrilla Cinema to Essay Film to Video Installation: Harun Farocki’s Practices Wednesday, June 29, 2011, 6:00 p.m., Theater 3
In conjunction with Harun Farocki: Images of War (at a Distance), a panel discussion will take place in Theater 3 (The Celeste Bartos Theater). Introduced and moderated by Sabine Breitwieser, Chief Curator, Department of Media and Performance Art, the panel will include Harun Farocki; Ayreen Anastas and Rene Gabri, artists and two of the organizers at 16 Beaver; and Tom McDonough, Associate Professor and Chair, Art History Department, Binghamton University. Tickets ($10; members $8; corporate members $8; students, seniors, and staff of other museums $5) can be purchased at the lobby information desk, the film desk, or online at MoMA.org/talks.