Squared target. The exhibition will feature installations and sculptures from the past decade. Like most contemporary artists, Ytterstad engages in a dialogue with art history, and also in this context he adapts and reconstructs. Everyday objects such as nails, coins, and wall mouldings serve as the starting point for more or less elaborate processes. The retrospective is part of a series showcasing major Norwegian contemporary artists. 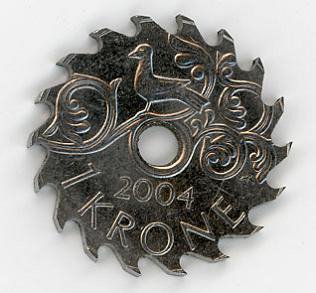 The exhibition «Snorre Ytterstad. SQUARED TARGET» is the first museum presentation of the Norwegian artist Snorre Ytterstad (b. 1969), and will feature installations and sculptures from the past decade. The retrospective is part of a series at the Museum of Contemporary Art showcasing major Norwegian contemporary artists.

Snorre Ytterstad’s playfulness and curiosity, combined with his skill as a craftsman and idiosyncratic eye for materials, has earned him a unique position in the Norwegian art world. Everyday objects such as nails, coins, and wall mouldings serve as the starting point for more or less elaborate processes. Through reconstruction, refinement, reduction, or merely a slight relocation, the objects are displaced from their customary surroundings, divested of their original function, and incorporated in new lines of association. They are thereby transformed from everyday objects and utensils to works of art.

Ytterstad thus follows on in the readymade tradition, a hundred-year-old school of art that began with Marcel Duchamp. Duchamp submitted a urinal entitled “Fountain” to an exhibition, thereby insisting on its status as art. Everyday life and low culture was thus incorporated into high culture in an entirely new way, forever changing the concept of art.

But even though Ytterstad refers heavily to both Duchamp and other artists from this tradition, it is the craftsmanship, materials, and process itself that form the core and the particularity of his artistic vision. Ytterstad’s visual universe is at first glance ordinary and simple, but closer inspection reveals a complexity in both form and content. He works on many levels, with nothing left to chance; the materials, form, function, and titles are carefully thought through, and the various levels form intricate connections with each other.

The public is invited to play along. Almost invisible wires silently occupy the exhibition room, and inside one of the sculptures there is a small room that is hidden from view, but the title Knot with an Empty Space gives us a clue. When you think you have found the answer, it often pays to look one more time. In Ytterstad’s universe a drawing pin not only serves as a fastening device, upon closer inspection you will discover that it rotates – and what’s more, that it rotates 60 times per minute.

Like most contemporary artists, Ytterstad engages in a dialogue with art history, and also in this context he adapts and reconstructs. In the video piece Bird in Space, he refers to Constantin Brancusi’s famous pared-down and formal sculpture of the same name. Ytterstad disrupts Brancusi’s dense and controlled form, replacing tranquillity with movement and chaos. In other pieces, objects that are charged with a well-established symbolism constitute the starting point for his artistic vision, for example a Norwegian 1-krone coin. This imbues his works with political content, but never without a sparkle in the eye; there is plenty of humour in Ytterstad’s more or less explicit social criticism.

Snorre Ytterstad was born in Bodø in northern Norway, and currently resides in Oslo. He was educated at the West Norwegian Academy of Fine Arts in Bergen (1992–95) and the National Academy of Fine Arts in Oslo (1995–96). He has been featured in several solo exhibitions, among them an exhibition at Bodø Art Society (1994); Satelliti, Galleria Kari Kenetti, Helsinki (2001); Schlafen Gegen Rechts, UKS Galleri, Oslo (2002); and On a Tightrope a Screw Thinks Shit, Galleri Erik Steen, Oslo (2008). Ytterstad has also taken part in several group exhibitions, including the UKS Biennial, Henie Onstad Art Centre (1998) and The Model Makers, Kunstnernes Hus [The Artists’ House], Oslo (2000). Snorre Ytterstad is represented at Galleri Erik Steen, Oslo.