The artist employs conceptual and narrative strategies in order to question - through art - the nature of objects and images, through media as diverse as digital presentation software, laser projections, found objects, performance and installation. The title of the exhibition, 'PowerPoint Karaoke', refers to an event organised in 2006 by the Berlin group Zentrale Intelligenz Agentur that consisted of PowerPoint presentations of more or less random material, mostly taken from the Internet, which participants were not familiar with and yet had to explain to audiences in real time. 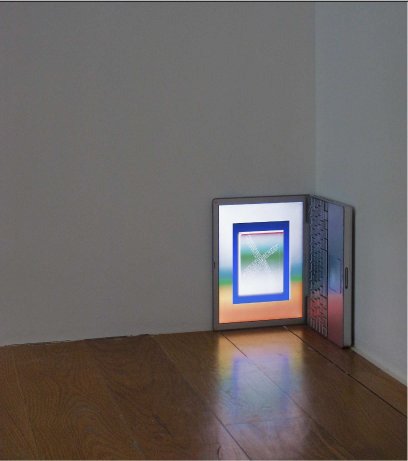 The Rubén Grilo exhibition is the third project in a series entitled ENTERING THE WORK, on display in the first floor galleries of the museum. The title of the exhibition is taken from the famous work by Giovanni Anselmo, Entrare nell’opera (1971). The series, which examines the museum audience as integral part of the work, departs from the paradox surrounding the concept of spectator, who is positioned somewhere between passivity and action.

WORKS ON DISPLAY
Rubén Grilo (Lugo, 1981) employs conceptual and narrative strategies in order to question — through art — the nature of objects and images, through media as diverse as digital presentation software, laser projections, found objects, performance and installation.

The title of the exhibition, ‘PowerPoint Karaoke’, refers to an event organised by the Berlin group Zentrale Intelligenz Agentur in 2006. Taking this story as his leitmotif, Grillo revisits the idea of the museum as an official place for the distribution of knowledge, bring the audience face to face with a seemingly disjointed puzzle of projected images, objects, quotes, documents, references to other artists and formal analogies.

Inspired by conceptual art, the work by Rubén Grilo (Lugo, 1981) explores art as a valid tool for approaching the unknown, introducing noise as part of the act of communicating with the spectator and analysing the way in which the technologies of the image, cultural codes, information, display, intuition, representation and cognition play a positive and also negative part in the construction of reality.

The title of the show, PowerPoint Karaoke, refers to an event organised in 2006 by the Berlin group Zentrale Intelligenz Agentur that consisted of PowerPoint presentations of more or less random material, mostly taken from the Internet, which participants were not familiar with and yet had to explain to audiences in real time. Beneath the entertaining surface was a critique of PowerPoint as a standard medium for transmitting ideas, learning and as a determining factor in decision-making.

Orchestrated from this premise, Grilo’s works hover between the absurd and the unavoidable recognition of images linked to a particular cultural context, intensifying the relationship of the viewer to the visual medium and incorporating unexpected layers of information, references to other artists, concepts, and cryptic ideas that collide, interlink and disperse the moment they appear.

The looped PowerPoint presentation, the medium chosen for most of the pieces on display, provides an opportunity to revise the modern idea of image autonomy by means of a channel whose codes are familiar to the public. Another interesting aspect of PowerPoint — in connection with video — is that despite its temporal dimension, its content can by definition be modified since its integrity is not based on physicality but rather on a general concept that groups together a series of interchangeable texts and images. It has to do with orality, with communication, with the speed at which ideas are transmitted and interpreted, with associations and with cognition. The difference to the normal use of PowerPoint is that here there is no orator to narrate the images, to make sense of them or to make associations. The idea of PowerPoint Karaoke beautifully explains that in this case it is the spectator that becomes the performer, or the person responsible for taking these images and recomposing them or interpreting them in such a way as makes them practical.

The use of laser projection technology, present in the two computer-controlled animations, is another of Grilo’s lines of investigation. With regard to these works, the artist offers the following thought: ‘All that is invariable within a transformation offers information about the object, and all that is variable offers different information, such as the relationship of the viewer to the object. When we look at the constant features, we perceive objects; when we look at the variations, we receive sensations.’

The exhibition includes the installation A cuarenta y un metros y cuarenta centímetros de lo mismo (Forty One Metres and Forty Centimetres Of the Same), 2011, in which two similar but different-sized objects are perceived as the same providing there is enough distance between them. It also includes a collection of found objects — El beneficio del ignorante (The Profit of the Fool), 2009-2011 — characterised by the fact that despite having been designed with an evident purpose in mind, the artist is unaware of their use.

Finally, the work entitled Un museo alternativo (An Alternative Museum), 2010, which is visible beyond the exhibition halls, consists in changing the original MARCO logotype and replacing it on different supports — the Museum’s website, labelling, stationery, signage — for the duration of the exhibition, in a sort of fictitious parallel world condensed in the design of a logo.

“The textual form conceptual art claimed for itself between 1960 and 1970 and the acceptance of institutional criticism as a genre during the same period are some of the aspects upon which Rubén Grilo bases his work. The use of visual media such as PowerPoint, laser animation and other graphics presentation software allows him to formulate new translations or meanings of information. These technical formats are combined with performance, drawing or installation in an attempt to question the processes of creation and reception by reflecting on the works’ display, its reproducibility or the new IT media that, together with narrative or conceptual strategies, determine their meaning.

Grilo, who champions visual technology as content, strives to investigate the interpretation process and the way in which pieces acquire meaning in relation to different codes or presentation strategies within an institutional framework. He calls on Daniel Buren and the latter’s thoughts on the museum’s function (1970) — the way in which it presents, collects and adds value as an inherent condition in objects and a determining factor when it comes to attributing meaning to them — as well as on rethinking the concept of autonomy in art; a judgement that, since modern times, runs parallel to multiple (and sometimes contradictory) relationships between the concepts of alienation, the emancipation of the subject, mass culture or the disappearance of the spectator. The artist himself wonders: ‘What if instead of the museum explaining the art work it were the art work that explained the museum? And what if the museum were not the medium, but the message?’

His project for MARCO assembles a series of works — some made previously, others made specifically for this exhibition — under the title ‘PowerPoint Karaoke’. In 2006, the Berlin group Zentrale Intelligenz Agentur ‘invented’ an event by the same name in which participants had to improvise a lecture in public using the PowerPoint program. This form of improvised theatre, as its creators called it, consisted in creating different presentations with material chosen from their own files or collected randomly from the Internet. The starting point was a critique of the program for standardising information transmission systems, which can affect decision-making at different levels and lead to serious consequences.

The audience reacts in the exhibition space by associating and relating the different elements arranged in the halls. The meaning of found elements, projected images and altered visual codes is displaced meaning as a result of the new relationships established between them. Thus the installation Sin título (Total Self), 2011, is made up of four laptop computers placed in a regular square space, one in each corner, and adapted to the space according to their shape. The formal references to Robert Morris’ Untitled (Corner Piece), 1964, and to minimalist self-referentiality are widened, alluding to the involvement of a spectator who absorbs the experiences and refines them to ensure they become conscious. Inspired by Carl Jung’s theories as to how the ego works, the artist organises the piece according to the four mental functions that enable us to form judgements or make decisions — thought, emotion, sensation and intuition — in an ‘attempt to tackle all the possible levels of experience that a spectator may have in a given space’.

The laptop content is organised into PowerPoint presentations, which follow one another throughout the exhibition space, displaying complete autonomy. Without a speaker or lecturer to put forward the information, the spectator becomes its sole interlocutor and interpreter.

In this way the PowerPoint projections combine the performative, visual and textual features that Rubén Grilo uses as a metaphor for the relationships that are established and disrupted — they are open, manipulable systems — between the elements confirming different realities: ‘I’m interested in the intersection between visuality, understanding and performance, which is highlighted particularly well by the idea of ‘PowerPoint Karaoke’, which I believe is a nice way of rethinking the modern idea of image autonomy through a very contemporary medium; with codes that people know, and constructed with a technology to which anyone has access.

Laser technology is something that Grilo is using for the first time and allows him to create abstract, non-existent, unrecognisable and indescribable forms and give them grant them an existence in the real world. Within the exhibition, the Pieza-láser (Laser Piece), 2011, shares space with El beneficio del ignorante, 2009-2011, a collection of found objects and others bought at street markets in different countries, whose strange shapes and industrial production conceal the secret of their function. It is not easy to grasp the purpose behind their design, which broadens their semantic possibilities. ‘The title refers to the idea that if you don’t know the rules it’s easier to transgress them. In other words, to someone who knows what their purpose is, the objects will only serve one purpose, while for me they will serve endless hypothetic purposes. The objects will disappear from the collection as soon as I discover, or someone tells me, what they are,’ explains Grilo.

Again, Rubén Grilo turns to language as a medium through which to represent these relationships, revisiting Buren — by changing the pre-established form of presentation — and Joseph Kosuth’s Art after Philosophy (1969): the nature of all artistic proposals is linguistic, for the fact that the artist names the object as a work of art is what actually makes it art.”

[Extract of the curatorial text for the exhibition catalogue]