The group show curated by Mario Codognato centres in on the recontextualization and re-appropriation of daily use objects or images as an effective practice for delivering a subversive and critical message. Objects can have a new life in which one, all or some of their basic qualities are stressed with the purpose of delivering a message in the new context, or made to change partially or completely their meaning by the association with other objects or by the vast range of possible material and/or semantic modifications. 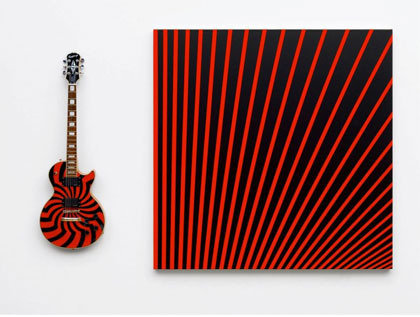 Almost 100 years after Duchamp’s urinal and after Puni hung a hammer on one of his canvases, rebus considers the recontextualization and re-appropriation of daily use objects or images as an effective practice for delivering a subversive and critical message.

The use of industrially manufactured items rather than handmade goods or, as in the tradition of art, of objects, surfaces and photographic images made directly by the artist, represents a method and a system which in waves is ever present through the last Century to the present day. The object in question can be presented by itself, assembled with other objects, incorporated into a “traditional” painting or sculpture, manipulated, distorted, or framed within a purpose-made structure. In all these cases and any other variation, it is the context of the exhibition space which above all causes the work to be seen, enjoyed and consumed as a work of art.

The object often has a multiplicity of meanings. Its first meaning is the reason why that particular object has been chosen (its common use and purpose, its historical relevance, its geographical provenance, its potential ambiguity, banality, familiarity or enigmatic nature, and many others). Its second meaning is its new life in which one, all or some of these qualities are stressed with the purpose of delivering a message in the new context, or made to change partially or completely their meaning by the association with other objects or by the vast range of possible material and/or semantic modifications.

John Armleder has used this device of appropriation throughout his career, most famously in his ongoing series of ‘furniture sculptures’. His ‘Zakk Wylde II’ pairs a customised guitar, designed and played by Zakk Wylde, and then bought by the artist at auction, with a canvas which echoes its formal pattern, the juxtaposition of the two reversing the expected hierarchy of art and object. For Hans-Peter Feldmann that hierarchy has always been in question, and his collection of artificial flower pots turned on their sides and mounted on the wall shift their meaning only by their re-orientation and re-contextualisation. Matias Faldbakken’s screw pieces use books and magazines as readymades, but by driving screws through them to attach them to boards he renders them forever illegible, sealing off their content and remaking these carriers of textual meaning as evacuated abstract formal devices, while in a related gesture Heimo Zobernig’s Untitled, 2005 creates a monochrome from an assemblage of empty projection screens.

Other works in the show harness the psychological or auratic charge of the original object and turn it to a new direction. Mircea Cantor’s Underestimated Consequences, a one metre cube cage filled with garlic, draws on the mythical protective and reputed healing properties of the bulb and places these meanings in tension with the associations of the archetypal modernist form. Vedovamazzei’s Eredita di un Padre is a coat, its pockets filled with five hundred euros in coins, its title suggesting a narrative of an object passed down from a father to his son on his death.

The one historical piece in the show, Sherrie Levine’s Shoes from 1972 marks a point of origin in the practice of re-presentation in the work of an artist who has become so central to the field. It is one of seventy five pairs of children’s’ shoes originally bought in a thrift store in San Jose, California.
After I got out of school in the early seventies, I was teaching in California and I bought the shoes in a second hand store in San Jose. When I moved to New York I brought one suitcase of my clothes with me and seventy-five pairs of my little black shoes. I brought them to Stephen Eins, who had a storefront at 3 Mercer Street and was interested in showing work that was specifically about commerce. We held a sale, as opposed to an exhibition- a shoe sale. The announcement was a postcard with a picture of a pair of shoes on it. It read "two shoes for two dollars". We held the sale two Saturdays and sold all the shoes.
-Sherrie Levine in an interview with Martha Buskirk in October #70, Fall 1994.

Sislej Xhafa also often brings together found objects from divergent sources and contexts. His modified American Express corporate card, human hair attached in the place of the plumed helmet of the card’s logo, recalls a surrealist collage object, but the defacing of the corporate with the human also delivers a potent critical reflection. With a related stance, Merlin Carpenter contributes an oil-filled radiator to the gallery’s summer show. Titled ‘Don’t Let the Bastards Grind you Down’ it comes with the instructions that it is to be switched on during gallery opening hours, and returned to the artist’s studio at the end of the exhibition.