Contemporary Art from the Centre of Asia. The exhibition presents works from Kazakhstan, Kyrgyzstan, Tajikistan and Uzbekistan, as well as from Afghanistan and Mongolia. Featuring 23 artists the exhibition examines the recent emergence of a vital, critical and self-confident contemporary art from across Central Asia which challenges existing prejudices and stereotypes. 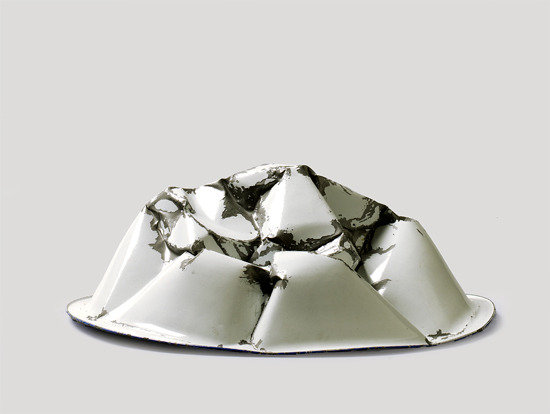 Between Heaven and Earth: Contemporary Art from the Centre of Asia is a ground-breaking exhibition which will bring to UK audiences a strong sense of the overlooked, yet exceptionally vibrant contemporary art from the former Soviet Republics of Kazakhstan, Kyrgyzstan, Tajikistan and Uzbekistan, as well as from Afghanistan and Mongolia.

The persistent mythology of the Silk Road, as well as the 'Great Game' played out between the British and Russian Empires in the nineteenth and early twentieth centuries, have dominated the Western view of these mysterious lands. More recently, however, these rich cultural and physical landscapes have been dismissed in the West as the 'Stans' and downgraded to theatres of environmental degradation, religious conflict and war. The result is a perception radically different from the truth: one that is devoid of nuance and processed into inhuman clichés of a 'Borat style', post-Soviet wasteland.

Between Heaven and Earth depicts a radically different 'landscape'. Featuring 23 artists, many of whom have not been seen in the UK before, the exhibition examines the recent emergence of a vital, critical and self-confident contemporary art from across Central Asia which challenges existing prejudices and stereotypes.

For over 5,000 years different cultures from both East and West migrated, mixed and eventually prospered in the deserts, mountains, cities and steppes between the Caspian Sea and the Mongolian plateau. Such hybridity was fertilized by many different routes of trade between the great capitals of China, Constantinople and the West.

The art developing now throughout the centre of Asia directly reflects this complex history and examines the multifaceted nature of both power and culture, often in shocking or humorous ways. The nomadic figure of the shaman—a character appropriated for Western art by Joseph Beuys in the 1960s—appears as a sarcastic and surreal presence in the work of many of these artists. Equally the spiritual experience which still accommodates active belief in Animism, Buddhism, Christianity and Islam is overlaid by the deadweight of materialism.

Different aesthetic traditions also raise their heads in a number of ways: through ancient myths and stories, through the bright, clashing colours of ikat textiles and the architecture of 12th Century mosques, through the now fading memories of the vast populations of Koreans, Western Europeans and other ethnic groups who were deported to the region in the 1930s and '40s, through folk customs that are still kept alive in the face of aggressively rampaging modernity, and through reconstructed memories of the nomadic, 'barbaric' past. This is a fundamental part of the reality and myth for the heirs of Genghiz Khan, Tamburlaine and many other groups of people who moved towards, and conquered, the West.

The exhibition is dominated by an overarching sense of a people’s struggle for individual expression and creative integrity at a time when traditional society and its memories are being demolished by economic and political forces far beyond the control of the individual.

Between Heaven and Earth is curated by Berlin-based curator and writer David Elliott, former Director of the Museum of Modern Art in Oxford, Moderna Museet in Stockholm, the Mori Art Museum in Tokyo, Istanbul Modern, and the Biennale of Sydney. He has worked and published extensively on Russian, East European and Asian art as well as on many other aspects of modern and contemporary art.