The King, The Island, The Dwarves, The Train...A solo exhibition of major new works and some of the most significant sculptures and installations by Los Angeles-based artist, including the ambitious 'Pig Island', a morally deviant world populated by pirates, cowboys, the likenesses of George W. Bush and Angelina Jolie. 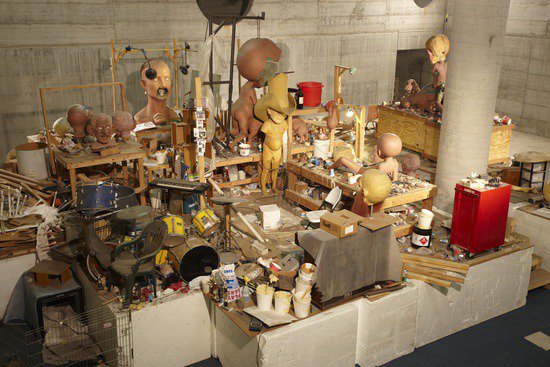 Hauser & Wirth is proud to present an exhibition of major new works and some of the most significant sculptures and installations by Los Angeles-based artist Paul McCarthy, including the ambitious ‘Pig Island’. Spanning both the Savile Row and Piccadilly galleries, as well as an outdoor location at St. James’s Square, London, this exhibition showcases the highly developed themes and interrelationships coursing through McCarthy’s complex practice.

Combining political figures and pop culture, ‘Pig Island’, on view at Savile Row, is a morally deviant world populated by pirates, cowboys, the likenesses of George W. Bush and Angelina Jolie, an assortment of Disney characters and the artist himself, all carousing in a state of wild and reckless abandon. The island is constructed from blocks of polystyrene piled high with wood, cast body parts, clay, spray paint and old fast food containers surrounded by a sea of blue carpeting.

Over a seven year period, ‘Pig Island’ grew to fill McCarthy’s studio, blurring the boundaries between the work and the workplace. It evolved from an accumulation of detritus and half-finished figures into a sculptural installation: every detail of the seemingly chaotic work meticulously positioned as if it were a carefully orchestrated film set, complete with film lighting. Unlike the picture-perfect Disney fairytales McCarthy so often references, ‘Pig Island’ flaunts its unfinished state and mechanisms, enabling the viewer to catch a glimpse of the artist’s process, the organic development of his sculptures and the rawness of a neverending work-in-progress.

Described by McCarthy as a ‘sculpture machine’, ‘Pig Island’ has given birth to numerous large-scale sculptures, including ‘Train, Mechanical’: a mechanical sculpture showing twin pot-bellied caricatures of George W. Bush sodomising two pigs. Each of the figures performs a choreographed set of actions – their asses move rhythmically back and forth, their mouths open and close, their heads spin and, when approached, their heads and beady eyes follow the viewer around the space.

‘The King’ presides over the main space of the Piccadilly gallery. This new monumental installation consists of a platform surrounded by large-scale airbrush paintings that were created on the easel that stands on the platform. Atop the platform is a throne upon which a silicone model of McCarthy sits stark naked with partly severed limbs, closed eyes and wearing a long blonde wig. Church pews arranged in front of the stage give the viewer a place to sit and contemplate the artist’s elevated status as they gaze up at his wooden throne.

McCarthy has been making mechanical sculptures as an extension of his performance-based art since the early nineties. His new mechanical work, ‘Mad House Jr.’, is an adapted version and, at the same time, a maquette of ‘Mad House’ (2008), first shown at the Whitney Museum of American Art. ‘Mad House Jr.’ is a small room-like cube with windows and a doorless entry. Like a miniature amusement park ride, the cube shakes and spins rapidly whilst a small camera installed inside the cube records all of its movements. This footage is then projected into the space, creating an environment of physical and mental disorientation.

For over four decades, Paul McCarthy has produced a body of work that bridges a variety of media and pushes the boundaries of contemporary culture – exploring issues of consumerism, pop culture and the underbelly of the American dream. Hauser & Wirth presents the first transatlantic show of McCarthy’s work with two different exhibitions on view simultaneously at Hauser & Wirth’s New York gallery, at both London galleries and in St. James’s Square, London, where McCarthy’s ‘Ship Adrift, Ship of Fools’ is on view until 15 February 2012. The massive new sculpture is a contemporary rephrasing of a medieval allegory, depicting a world of power without principle as the ship and its denizens hurtle obliviously towards their own destruction.