The Way We Live Now explores Conran's impact and legacy, whilst also showing his design approach and inspirations. The exhibition traces his career from post-war austerity through to the new sensibility of the Festival of Britain in the 1950s, the birth of the Independent Group and the Pop Culture of the 1960s, to the design boom of the 1980s and on to the present day. 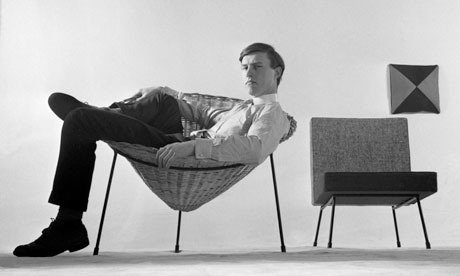 The Design Museum marks Sir Terence Conran’s 80th birthday with a major exhibition that explores his unique impact on contemporary life in Britain. Through his own design work, and also through his entrepreneurial flair, Conran has transformed the look of the British home. He has established a design studio and an architectural practice with a worldwide reach. He was the founder of Habitat and a pioneer of the new restaurant culture driven by a passion for simplicity.

The Way We Live Now explores Conran’s impact whilst painting a picture of his design approach and inspirations. The exhibition traces his career from postwar austerity through to the new sensibility of the Festival of Britain in the 1950s, birth of the Independent Group with its flare for the avant-garde and the Pop Culture of the 1960s, to the design boom of the 1980s on to the present day.

The exhibition, curated by Stafford Cliff and Deyan Sudjic, will cover key areas and themes of Conran’s career whilst exploring his wider impact on British life. The exhibition opens with a collection of Conran’s own pieces from the late 1940s and 1950s, when he was welding steel chairs himself, designing textile designs, ceramics and magazine covers. The Habitat story will include the reconstruction of one of the room sets shown in the Habitat catalogues that were so influential in the 1960s and 1970s. It will also look at the work of the many talented designers that Conran commissioned to work on Habitat’s identity, and products. Conran’s role in professionalising the practice of design is charted by the work of the various Conran Design studios, which undertook projects as diverse as lighting, furniture, kitchenware, packaging, architecture and retail design. Conran’s approach to food is traced by a look at the many restaurants that he has designed and opened. A recreation of Conran’s study from his home in Barton Court will offer a glimpse into his private world. The exhibition will also demonstrate Conran’s influence and legacy on current designers including recent Royal College of Art graduates who have been awarded the Conran Foundation RCA Award.

Born in 1931 Terence Conran studied textile design at London’s Central School of Art. Quitting his studies in 1948 to seek full time employment, Conran set up a workshop with his tutor, the artist and print-maker Eduardo Paolozzi where he concentrated his skills on furniture design, ceramics and fabrics. Travelling in France, the young Conran saw the for the first time, simple but delicious food, enticing country markets and shops full of unfussy kitchenware’s and was inspired to introduce this appealing way of life to Britian. The early 1950s saw Conran work on the Festival of Britain alongside architect Dennis Lennon and in 1953 he opened his first restaurant The Soup Kitchen just off The Strand in London, selling soup, espresso coffee, French breads and cheeses and apple tarts. The Soup Kitchen was followed by The Orrery restaurant, hailing the beginning of a variety of Parisian style brasseries that would transform Britain’s eating habits. In 1956 Conran launched the Conran Design Group, a practice covering interiors, furniture and graphic design.

In the 1960s, London became the capital of cool, Carnaby Street, The Beatles and Mary Quant represented a young new generation who aspired to clean lines and colour. The opening of Habitat in 1964 shattered the mould of existing furniture stores and created an entirely new retail experience, meeting the needs of the Pop Culture with its fresh interiors, cool staff and modern furniture. At this time, a breakthrough project for the Conran Design Group was designing the interior for Terminal One at Heathrow.

Habitat introduced European aesthetics, modernity and affordable design, creating aspirational interiors with Bauhaus armchairs, Braun electrical goods and modular seating units. Habitat’s simple forms, natural materials and fresh colour palette were imaginatively presented in the store The success of Habitat propelled Conran into the retail mainstream, the 1980s saw him establish The Storehouse Group which acquired Heals furniture store Conran also oversaw British Home Stores and Mothercare. As Chairman of Hepworth, Conran also set up Next, the high street fashion chain. During this period projects ranged from designing the interiors and cutlery for Concorde, the redesign of the Concorde Room at JFK airport, pushchairs for Mothercare and ashtrays for his Conran restaurants, which were expanding rapidly.

The Conran Design Group demonstrated the best of design in Britain, specialising in interiors, hotel and restaurant design, graphics, products and home ware. With Fred Lloyd Roche Conran also established an architectural practice, Conran Roche, which eventually became Conran & Partners as it is known today who work on architecture, interior design and master planning projects worldwide. Conran’s restaurant empire continued to grow both at home and abroad with iconic restaurants such as Mezzo, Bluebird, Quaglino’s and Le Pont de la Tour opening in the UK and Guastavino’s in New York and Alcazar in Paris. Following the sale of a 49% stake in Conran Restaurants to create a new company D&D London, Conran has more recently opened Boundary, Albion and Lutyens. His desire to sell good design to the mass market enters a new chapter with the forthcoming home ware collection for Marks and Spencer, alongside his other furniture businesses Benchmark and Content by Conran. The design decade of the 1980s saw Conran establish the Conran Foundation, an educational charity focused on promoting a better understanding of design. Its first initiative was the Boilerhouse Project, a gallery housed in the basement of the Victoria and Albert Museum. Under the directorship of Stephen Bayley the Boilerhouse staged exhibitions and Conran and Bayley opening the Design Museum in 1989, in the development of 13 acres of Butlers Wharf which Conran had acquired. It was the first museum in the world devoted to the promotion and examination of design. In 2014 the Design Museum will relocate to new premises in the Former Commonwealth Institute on Kensington High Street, London, this new project, passionately championed by Conran will create one of the world’s leading design museums.

Throughout his career Conran has shown how design is intrinsically linked to business activity, and one that has earned its place at the centre of national, economic and political debate. Now in his 80th year Conran continues to symbolise a way of life that is both attractive and aspirational, an approach to life that has indeed defined The Way We Live Now.