An exhibition on the theme of the counter-culture in Switzerland, expressed through photography and the visual arts from 1950 to the present day. The show is a contextualization of the work of 25 photographers, artists, film and video makers. On show Emmanuelle Antille, Plonk&Replonk, Andri Pol, Stefan Burger, Adolphe Braun, Nicolas Crispini, Jules Spinatsch, Martin Stollenwerk, Karlhei... 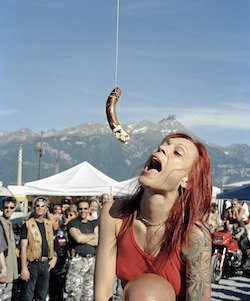 The Musée de l'Elysée offers an original exhibition on the theme of the counter-culture in Switzerland, expressed through photography and the visual arts from 1950 to the present day.

The exhibition is a contextualization of the work of twenty-five photographers, artists, film and video makers. It shows the various aspects of the counter-culture in the 1960s and 1970s, and the photography critique that succeeded it.

The counter-culture of the 1960s challenged the traditional values in private and public life; it redesigned cultural and political boundaries, from projects of empowerment to sexual liberation, from realism to utopia, from the possible to the impossible. After this long period dedicated to the conquest of freedom, notably artistic freedom, counter-culture disappeared during the 1980s, to be recycled by fashion, consumerism and the market economy. Society switched from patriarchal domination to an ideology of desire and consumerism. The global village of the 1980s has now become the environment for globalization. When everything is measured with the same scale of value, everything can become the subject of appropriation. Contemporary culture blends tradition and modernity, and is now integrated very directly into the market economy. In a politically correct environment, critical visual and contemporary approaches usually use unconventional perspectives.

From subversion to critical expression
In the historical section, the exhibition examines the life of Swiss 'Hell's Angels' photographed by Karlheinz Weinberger. It also discusses Luc Chessex's political utopia in the 1960s, who left Switzerland and moved to Cuba, and addresses the controversy caused by Harald Szeemann at the Venice Biennale in 2001, when he decided to present the work of Arnold Odermatt, a police photographer from the Nidwalden canton.

In the contemporary section, the exhibition presents recent work by Swiss photographers who constantly question the issue of identity, through landscape, the environment, security and even the Swiss chalet, the ultimate symbol of the sense of Swiss identity born in the late 19th century.
Each viewpoint is confronted with another and it is their accumulation that makes the exhibition. Ruptures, fragilities, unconventional approaches or second level perspectives undermine the certainties and draw, between the lines, another vision of society, its customs, its politics or its artistic expression. Although true counter-culture does not exist anymore, contemporary artistic expression uses with intelligence and originality critical tools such as humour, irony, editing, collage or unconventional perspectives.