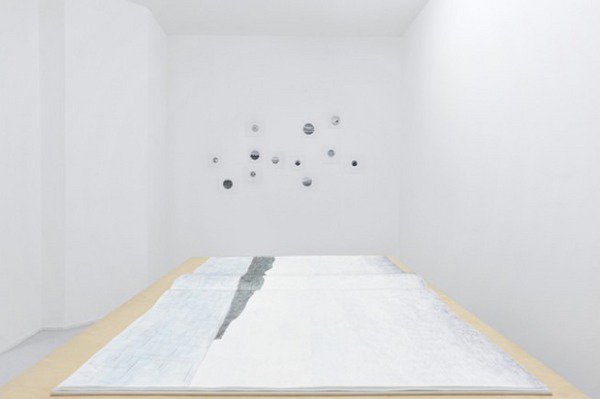 Galerie Suzanne Tarasieve has the pleasure to announce the second exhibtion of Russell Crotty, american artist exhibited this year for the opening of Turner Contemporary in Margate with Daniel Buren.
Known for paper-coated suspended globes and large-scale books containing a fervent network of ballpoint pen lines and color washes, Crottyʼs vast body of work challenges the very definition of drawing, pushing the genre towards minimal sculptural installation.

The artist's practice chronicles an idiosyncratic commentary on aspects of the natural and manmade world that incite his imagination. Direct physical engagement with the subject is always at the heart of the work, with on-site field notes made in sketchbooks. The remembered experience, along with Crotty's knowledge of exploratory 19th century science, becomes the referential context for his peculiar taxonomies – those of coastal panoramas, ridge lines, rock formations, etc. – that reveal the fascination and ardor that fuels his work. Fields of text, a hybrid of rant and prose, refer to Crottyʼs manifest ruminations. At times, it is found text from such sources as real estate magazines; at other times, a diatribe using the vernacular of the locality with which heʼs engaging. In all cases, the text serves as not only a formal drawing element denoting strata and volume, but also a discourse for his fixation on place, turf and bearings.

A serious amateur astronomer for decades, Crotty studied the night sky utilizing his own array of telescopes, with occasional sojourns to professional observatories, along with making important observational contributions to accredited astronomy organizations such as NASA and ALPO. He obsessively documented the night sky and celestial phenomenon with his signature simplicity of line. The resulting body of astronomical work was informed by actual scientific research, yet infused with the poetic license of the artist.

The work in “Aligned with the Coast” represents a formative shift in Crotty's focus, which was hastened by a devastating fire in 2007. Relocated inland in Northern California for several years, limited access to the coast served to amplify his desire to reconnect with the ocean. A new body of work evolved – one of seascapes, landscapes and coastal mapping, citing both familiar and imagined coastlines, ridge lines and horizons. The title of this exhibition implies not only a physical orientation, but moreover Crotty's strong alliance with, and circumspection of the place where land meets sea. Although often reflective of a ravished and diminishing natural world, installations of this work create a decidedly calm and optimistic spacial experience.

"The wildfire that ended Crotty's run in Malibu effectively plucked the artist's imagination down from the stars. His observatory gone, he once again found himself at sea level" – Kimball Taylor, "Searching for Russell Crotty," Surfer Magazine, Dec. 2010