Behauptungen, teil 3. The fragments displayed show the law that has been chiseled into them, the first Axiom by Newton "actio est rectio", a physical law that states that any action causes a reaction. 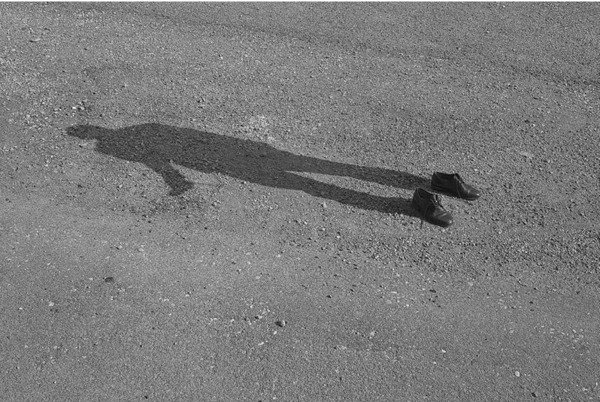 "But as Moses came down to the camp and saw the golden calf and the dancing he smashed the tablets at the slopes of the mountain." (Exodus, 2nd Book Moses, Ch. 32)

The smashing of the stone tablets is one of the oldest motives in the written history of humankind and since Charlton Heston also everywhere in pop iconography. Through the destruction of the stone tablets Moses was not criticizing the handed down laws but its reception by the people. With Herbert Weber the story gets an ironic twist. The fragments displayed show the law that has been chiseled into them, the first Axiom by Newton "actio est rectio", a physical law that states that any action causes a reaction.

The provocative gesture of Herbert Weber is also meant for the public, the viewer gets told that he does not adhere to the laws of physics and this being untrue of course has then to be applied to the arts.

The artist is actor, director and victim; the piece created by him gets destroyed and presented to the viewer in fragments as a relic. The pseudo-documentaristic aspect of its recording on video becomes an inherent part of the second work, a fotobook. The creation of the sculpture becomes senseless and ridiculous, being just a cast of something original being destroyed.

The performative is a central part of Herbert Weber's oeuvre even if the artist does not regard the act of taking a picture as being performative or scenic. The conceptual basis for Herbert Weber's work plays with all of the above mentioned but keeps a strict distance to anything too obvious. In the end there is only a picture being scrutinized.

The works on display at Christinger De Mayo deal with the role of the artist as his own archivist, as a prisoner of the production process, belonging to the artwork and still being – in the sense of George Bataille – an artistic "acteur". His actions coming from within, being subversive, asking and scrutinizing, destroying and still finding a temporary form: always an artistic assertion.