Too Far, Too Close. Distance and proximity; estrangement and intimacy: in many ways, the film-maker Akerman could be called the quintessential artist of the in-between. Both this exhibition and the accompanying publication attempt to map out the resultant terrain vague which her work inhabits, and it is the first exhibition to bring together the early experimental film work with her later forays into installation art. 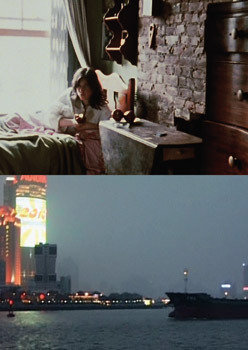 In 2002 the Antwerp museum of Contemporary Art M HKA merged with the Center for Visual Culture, incorporating both the latter's film program Filmmuseum and its visual culture journal AS. This important moment in the history of the museum marked a defining shift towards a view of contemporary art that locates it within the broader landscape of contemporary visual culture—a direct reflection of the growing importance, from the early 1990s onwards, of film and cinema in contemporary art production, as well as the convergence of film and visual art as once-distinct media. In addition, the museum has a programmatic dedication to the many hybrid forms that emerge from the increasing integration of film and visual arts, at the exact moment when a growing number of independent, adventurous filmmakers ("auteurs") are tempted to seek refuge in the traditional spaces of visual art such as museums, galleries, and biennials, for reasons connected to the intensified commercialization of the film circuit throughout the 1980s and '90s.

Ten years on, M HKA is organizing the first major European solo exhibition of Brussels-born, Paris-based film artist Chantal Akerman (b. 1950), whose practice perhaps best exemplifies the complex interplay of the various cultural developments summarily described above. A celebrated film auteur who redefined feminist film history in particular, Akerman has long been a household name of the arthouse film circuit. From the mid-1990s onwards, however, she has also been increasingly active in the expanded field of film-based installation art. The focus of both this exhibition and the accompanying publication is very much on this particular facet of Akerman's artistic practice.

That said, the significance of Akerman's work for the present moment is not merely a formal or medial matter, but is strongly connected to her programmatic interrogation of issues that concern biography, gender, identity, and memory, all of which are framed against the backdrop of her groundbreaking exploration of the aesthetic of everyday life. Her iconic, highly influential Jeanne Dielman, 23 Quai de Commerce, 1080 Bruxelles (1975) continues to stand as a monument to the key feminist and queer rallying cry that "the personal is political" and vice versa. Quite a few of her later works have explored her family history as a child of Holocaust survivors, all the while remaining acutely aware of the porousness of all boundaries between documentary and fiction. It is no coincidence that her first foray into installation art, D'Est (1995), was subtitled Au bord de la fiction, or, almost manifesto-like, "bordering on fiction"—between testimony and narrative, between I and self, or I and other.

Too far yet too close; distance and proximity; estrangement and intimacy: in many ways, Chantal Akerman could be called the quintessential artist of the in-between. Both this exhibition and the accompanying publication attempt to map out the resultant terrain vague which her work inhabits, and it is the first exhibition to bring together the early experimental film work with her later forays into installation art—all the way from the ageless statement of intent Saute ma ville (1968), via the emblematic D'Est (1994) and the disorienting, immersive Marcher a cote de ses lacets dans une frigidaire vide (2004), to the complex multi-screen installation piece Maniac Summer (2009).

Chantal Akerman. Too Far, Too Close is curated by Dieter Roelstraete. The accompanying monograph, published by Ludion and edited by Anders Kreuger and Dieter Roelstraete, contains essays by Giuliana Bruno, Tim Griffin, Steven Jacobs and Vivian Sky Rehberg, and an interview with Elisabeth Lebovici. A conference devoted to Akerman's signature exploration of the film/art hybrid will be organized at M HKA in April 2012.