And the 'Forbidden Paintings' of Kurt Schwitters. This retrospective exhibition offers a representative sample of Kirkeby's extensive oeuvre to date, with a particular focus on his painting: more than 180 works are presented chronologically and thematically. The exhibition also takes a look at the little-known realistic landscape paintings of the avant-garde artist Kurt Schwitters. Curated by Siegfried Gohr. 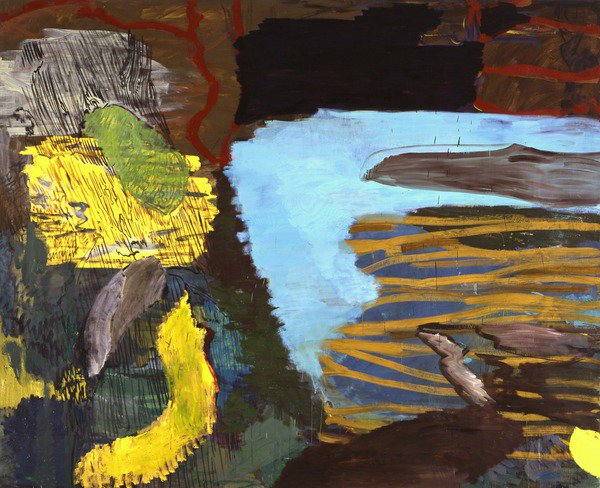 This retrospective at the Centre for Fine Arts presents a variety of aspects of the Danish artist's considerable oeuvre. The exhibition also takes a look at the little-known realistic landscape paintings of the avant-garde artist Kurt Schwitters.

To mark the Danish presidency of the Council of the European Union, the Centre for Fine Arts presents "Let's Dansk!", a varied programme focusing on Denmark that includes exhibitions, film, architecture, literature, music, and workshops for children. The Per Kirkeby retrospective is at the heart of this programme.

The Danish painter, sculptor, architect, and writer Per Kirkeby (born in 1938) has pursued a highly distinctive artistic path over the last 40 years. He refuses to be pigeonholed, either in terms of artistic disciplines or in regional terms. His work, nonetheless, is characterised by a considerable internal coherence and Kirkeby has always seen himself as first and foremost a painter.

The Danish Golden Age of the 18th century, Edvard Munch and Asger Jorn, and the philosopher Søren Kierkegaard have all been key influences on Kirkeby, who has also taken a great interest in modern French and German masters. North and South, Germanic and Mediterranean culture meet up in him. Per Kirkeby's art, rooted in his earlier studies of geology, has as its key themes landscape, sedimentation, and stratification. Throughout his career a perpetual dialogue between nature and abstraction and between landscape and architecture has been prominent in his work. The striking coherence of this body of work and the diversity of the forms of expression involved are leitmotifs of the exhibition. Throughout his career he has experimented with a variety of techniques and media: oil painting and mixed techniques on Masonite (fibreboard) and canvas, collage, watercolour, "overpainting", book illustration, and sculpture in bronze and brick. Kirkeby also has a considerable amount of literary work to his name and has made films and worked with Lars von Trier on the visual identity of Breaking the Waves, Dancer in the Dark, and Antichrist.

This retrospective exhibition offers a representative sample of Kirkeby's extensive oeuvre to date, with a particular focus on his painting. More than 180 works are presented chronologically and thematically, allowing the visitor to appreciate the essence of Kirkeby's vision of art. His artistic world is explored via a mix of known and never or rarely shown works, right up to his most recent work.

Visitors will also have an opportunity to discover an unusual and – until now – largely neglected aspect of the work of the German avant-garde artist Kurt Schwitters. The exhibition includes a section with 15 realistic landscapes by Schwitters, including two works from Kirkeby's personal collection. Kirkeby is fascinated by this artist and has written a book about him (published in 1995) in which he discusses these "forbidden paintings".

The exhibition begins with the first Masonite works in a 122 x 122 cm format, which present a powerful synthesis of the ideas of cubism, Cobra, pop art, informal art and minimalism.

The 122 x 122 cm format is one that recurs throughout Kirkeby's entire career, for example in the works known as his "blackboards": Masonite panels covered with blackboard paint on which he works with chalk, oil paint and other mixed techniques.

The year 1975 saw a shift, with the artist switching to oil paint on canvas and asserting a traditional way of painting, in the context of an ongoing discussion where painting had been declared dead. With this move his paintings took on a new dimension and new themes were introduced: landscapes with and without figures, still lifes, and trees. These themes have continually recurred, right up to today, and have often been incorporated into series.

In the 1980s Kirkeby tackled much larger formats that offered scope for a more heroic and expressive style of painting. Today, at the age of 73, Kirkeby is still working away, both on large canvases and on Masonite squares.

In the exhibition paintings alternate with bronze sculptures and work on paper such as watercolours, collages and book illustrations. Kirkeby is also known for the architectural brick sculptures he has been making outdoors since the 1970s – in the Middelheimpark in Antwerp, for example. Models in bronze, drawings, and photographs demonstrate this aspect of his oeuvre.

The exhibition also includes a unique documentary about Kirkeby's work, Per Kirkeby Winter's Tale (1996). The film-maker Jesper Jargil shows, step by step, how a large oil painting came into existence, from the first brushstroke on the bare canvas to the moment the work was hung in a museum.

Kirkeby's intellectual world as an artist, finally, is evoked via books he has written. He has published poems, art books, and essays about (the history of) art. He has also published a number of monographs on artists such as Eugène Delacroix, Gustave Moreau, Paul Gauguin, and Kurt Schwitters.

The "forbidden paintings" of Kurt Schwitters

In the 1980s Kirkeby came across the realistic landscapes painted in the period between 1931 and 1939 by the German artist Kurt Schwitters (1887–1948). Schwitters is regarded as a died-in-the-wool Dadaist and is known first and foremost for his "Merz" collages. His allegedly "degenerate" avant-garde art attracted the attention of the Gestapo and in 1937 he fled to Norway, where he had spent a number of summers since 1931. In his Norwegian period he painted a number of realistic landscapes, which made a deep impression on Kirkeby.

In his book Kirkeby describes these paintings as "forbidden", in the sense of"wrong", as they were outside the modernist mainstream of the 1930s and 1940s. These anachronistic landscapes were seen as "old-fashioned and styleless", regressive, and as a result never became known to a broad public. Kirkeby was fascinated to see that an avant-garde artist like Schwitters had dared to undertake such a drastic change in style. He recognised in these works his own free approach to art, independent of dominant styles and tastes. Like Schwitters, Kirkeby refuses to let himself be pigeonholed; his art transcends the dominant spirit of his time.

In his book on Kurt Schwitters, Kirkeby writes: "It was the first example I saw of Schwitters' Norwegian potboilers. The forbidden paintings, the ones that did not correspond to “history”, the rejected and shameful reminders of the German painter's adversity. I thought it was an amazing picture. It corresponded to my own crazy state of mind." (p. 11)

Per Kirkeby (born in 1938) obtained a Master's in Arctic Geology from the University of Copenhagen in 1964. It was only later that he became associated with the radical Experimental Art School in Copenhagen and with the international Fluxus movement. During his geological studies at the university he undertook a number of expeditions to the North Pole and to Greenland. As an artist he draws inspiration from this early fieldwork and it made his vision of landscape, sedimentation, and stratification a key element in his work.

Per Kirkeby has been a guest at the Centre for Fine Arts before: in 1981 he was one of the artists selected for the group exhibition Malerei in Deutschland and in 1988 he presented a solo exhibition of recent work. His participation in the Malerei in Deutschland ("Painting in Germany") exhibition might appear surprising at first sight, but the artist has a variety of links with Germany. From 1978 to 1988 Kirkeby taught at the Kunstacademie in Karlsruhe and from 1988 at the Städelschule in Frankfurt. He had shared interests and contact with artists such as Georg Baselitz, Markus Lüpertz, AR Penck, Jörg Immendorff, and Anselm Kiefer, key players in what was labelled as “German neo-expressionism”. Like those artists, Kirkeby is linked to the legendary Galerie Michael Werner in Cologne.

Kirkeby's works have been shown in numerous exhibitions all over the world and he is represented in many public collections, including those of the Tate Gallery (London), the Metropolitan Museum of Art (New York), the Museum of Modern Art (New York), the Phillips Collection (Washington) and the Centre Pompidou (Paris). He represented Denmark at the Venice Biennale in 1976 and took part in Documenta VII and Documenta IX. A number of major monographic exhibitions have been held in Europe and in the US: at the Kunsthalle in Berne (1979), the Whitechapel Art Gallery in London (1985), the Museum Ludwig in Cologne (1987), the Castello di Rivoli in Turin, , the Musée d'Art Moderne de la Ville de Paris (1998), the Arts Club of Chicago (2007), the Louisiana Museum of Modern Art, Humlebaek (2008), Tate Modern in London, and the Museum Kunstpalast in Düsseldorf (2009).

Kurt Schwitters (1887–1948), a German avant-garde artist from Hanover, earned his spurs in a variety of artistic movements and media, including Dadaism, constructivism, surrealism, poetry, music, painting, sculpture, collage and assemblage, graphic design, typography, and installation art. He became most famous for his "Merz" concept, which "is about relationships, preferably between everything in the world". In the early 1930s the Schwitters family spent most of the summer holidays in the north-west of Norway. In 1937 Kurt Schwitters had to flee Nazi Germany and chose to spend his exile in Norway. He stayed there until the Germans occupied the country in 1940, when he moved to Great Britain, where he remained until his death in 1948.

The curator of this exhibition, Siegfried Gohr, has been familiar with Per Kirkeby's work for more than 30 years and knows the artist personally, as a result of their collaboration on various exhibition projects, including the first Kirkeby retrospective in Germany in 1987 at Museum Ludwig in Cologne. Gohr teaches at the Kunstacademie in Düsseldorf. He has written many catalogue texts about Per Kirkeby; an anthology of those texts was published in book form by Hatje Cantz Verlag, Stuttgart, under the title On Per Kirkeby, in 2008 to mark Kirkeby's 70th birthday.

In collaboration with: Michael Werner Gallery, Märkisch Wilmersdorf, Cologne and New York
With the support of: Ministry of Foreign Affairs and Ministry of Culture of Denmark, Danish Agency for Culture, Embassy of Denmark in Brussels, Danish Cultural Institute / Benelux, Galleri Bo Bjerggaard, Copenhagen