Archivo F.X. - Business, Economics, Conjuncture. The project is based on an archive that Romero has been compiling since 1999. Within the archive are more than one thousand documents linking the history (histories) of anticlerical iconoclasm in Spain (between 1845 and 1945) with international positions of the modern avant-garde. 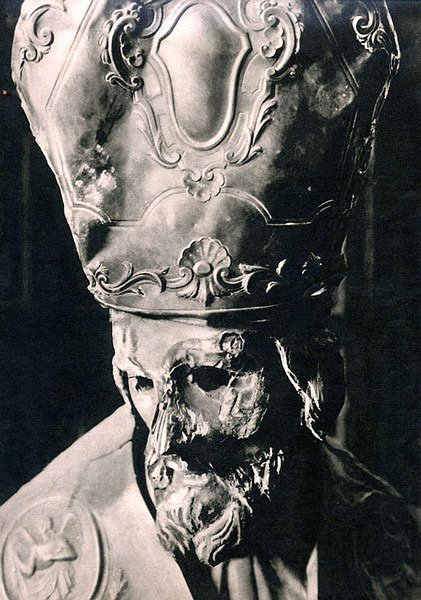 From February 11 to April 29, 2012 the Württembergischer Kunstverein is presenting the project Archivo F.X. by Spanish artist Pedro G. Romero.

The project is based on an archive that Romero has been compiling since 1999. Within the archive are more than one thousand documents linking the history (histories) of anticlerical iconoclasm in Spain (between 1845 and 1945) with international positions of the modern avant-garde.

Drawing from this continually expanding pool, Romero develops various ways of staging the Archivo F.X. that range from publications or multimedia objects to complex exhibition choreographies. These approaches also redraft the archive’s conceptual framework from ever-new perspectives, such as city, knowledge, community, or economy.

The exhibition staging of the Archivo F.X.—specially conceptualized for the Württembergischer Kunstverein and subtitled Business, Economics, Conjuncture—is conceived as memory theater, archive, and imaginary museum in equal turn. Here the presentation predominantly revolves around the relations between iconoclasm and avant-garde, secularization and economics, money and the holy. Plundered churches, vandalized saints, or church-tower bells that have been smelted into weapons are related to Hugo Ball, Valie Export, or Joseph Beuys. A coin from which the word “Catholic” has been removed meets anti-globalization opponents. A machine that converts five cent coins into effigies of saints meets Georges Bataille. And banknotes that were once expressly printed to disseminate the change of city names which formerly had been religiously connotated are here associated with Marcel Duchamp, Cildo Meireles, or Salvador Dalí.

Taking the form of a walk-in montage—comprised of text-image-collages, photographs, audiovisual documents, objects, and all kinds of different artifacts—the Archivo F.X. interrelates the seemingly irreconcilable. In so doing, this veritable “archive machine” sets into motion a steady reconfiguration of things: the reconsideration of existing conditions, which are literally made to dance.

The exhibition fosters a special dialogue with the artists Hugo Ball and Emmy Ball-Hennings, Joseph Beuys and Alexander Kluge. Three rooms are dedicated to works by these artists, formally referencing the “Salon” (Ball/Ball-Hennings), the “White Cube” (Beuys), and the “Black Box” (Kluge). However, only sections of these three rooms are present. In other words: situated at the margins of the actual exhibition space, these three rooms expand the space along the lines of an imaginary continuation. At the same time, they spare the exhibition’s central area, which accommodates—again in a backstage-like situation—the various materials, objects, and arrangements of the Archivo F.X. Suspended between this “center” and its “peripheries” is a multifarious net of cross-references that evokes an interminable process of de- and recontextualization.

In this respect, the exhibition—which, considering its abundance and density of material, can hardly be grasped in all its entirety—may be viewed as an opportunity to enter into this game of reconfiguring things far beyond any claim to being exhaustive. For the Archivo F.X. itself contradicts the idea of completeness; it has been deliberately designed as an interminable project—a project under permanent construction. This is ultimately mirrored in the exhibition architecture, which references the space of potentiality expanding beyond the situation at hand.

The exhibition Archivo F.X.: Business, Economics, Conjuncture has been developed in close collaboration with Romero as well as with the co-curator Valentín Roma (Barcelona). Various publications will be issued in conjunction with the exhibition.