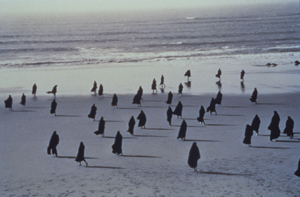 The exhibition, which will only be seen in MontrÃ©al, Minneapolis, Miami, and then in Houston, brings together the largest collection of Neshatâ€™s video environments ever presented including: Soliloquy of 1999, Pulse and Passage of 2001, as well as Turbulent, Rapture, and Fervorâ€”a trilogy of films made in 1998, 1999, and 2000, respectively. The films are accompanied by mesmerizing soundtracks by such contemporary composers as Sussan Deyhim and Philip Glass.

Born in Iran in 1957, Neshat immigrated to the United States at age 17 to attend the University of California at Berkeley. In 1986, she returned to Iran for the first of several visits and found the country transformed by the Islamic Revolution. Her resulting sense of displacement and exile inspired her to create works that investigate the collision of tradition and modernity in the East and West within an increasingly globalized world. According to Neshat, she engages in "universal dialogues while keeping within the specificity of the Islamic culture."

Neshatâ€™s epic tales are told through sweeping panoramas of striking opposites: the desert and the sea; the architecture of East and West; and women of Islam in black chadors and Muslim men in crisp white shirts. The installations differ from traditional cinema in that they are seven to 17 minutes in length and present wall-sized projections, often two to a room, that play continuously. The viewers, positioned between sound and image, enter and leave as they choose.

The exhibition, presented in MAMâ€™s Upper Level Gallery, also includes 12 stunning, large-scale photographs related to the videos. Interspersed between the video rooms, the photographs encourage further contemplation by placing us at the threshold of two cultures, illuminating the differences and similarities between them.

"In presenting Shirin Neshat MAM fulfills two important aspects of its mission," said Suzanne Delehanty, MAM Director. "We are pleased to present the work of this internationally acclaimed artist to audiences in South Florida and we are committed to serving as a forum for the exchange of ideas. In this way, MAM reflects Miamiâ€™s globalism and diversity."