In this series of emigre' portraits Moses' photographs keep contemporary witnesses from being forgotten and disappearing from our collective memory. He was particularly moved to keep alive the memory of those women and men driven out of Germany by the Nazi regime. 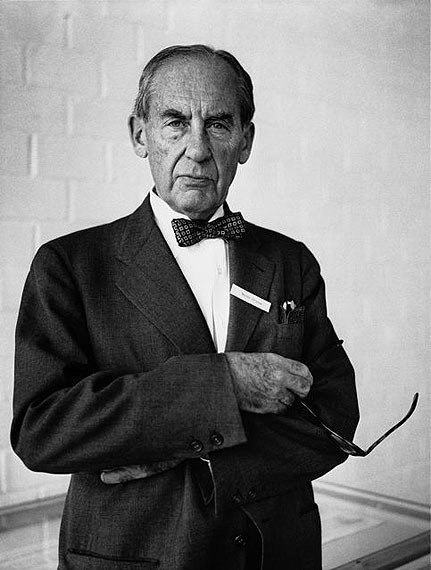 Stefan Moses is passionate about meeting his fellow humans and seeing their faces. His portraits are unmistakably sympathetic. They are also marked by the humor and fantasy used by the photographer to achieve his subjects' playful cooperation. His art moves beyond mere portraiture to capture the depth of the person's character and energy.

Srefan Moses' portraits are known for their felicitous intimacy and long-range focus extending over decades. His photography has given us a unique collection of personalities and a comprehensive panorama of German cultural and intellectual history.

His series of emigré portraits, now being shown at the Johanna Breede gallery, will also some day be considered an essential milestone in German art history. We do not recognize all of them, but Stefan Moses' photographs keep contemporary witnesses from being forgotten and disappearing from our collective memory. He was particularly moved to keep alive the memory of those women and men driven out of Germany by the Nazi regime. His photographs recall how they had to start life anew in foreign countries. He also recalls how some came back after the War and played their part in rebirthing German society. Many of these "re-emigrés" look at us through the portraits of the "giants of old"—politicians, artists, writers—whom Moses invited to join him on hikes through the forests. Like primordial beings, we see among the gnarly, twisted tree branches such ancients as Willy Brandt, influential political spin doctor Sebastian Haffner, and pre-war acting legend Tilla Durieux.

In the "Myself in the Mirror" series, Moses gave over control of the camera shutter to his subjects. We see such people as Theodor W. Adorno, Ernst Bloch, and Hans Mayer looking at themselves with deep reflectiveness and amazement. The dialogue in the photos about character brings about a clash between self-examination and self-representation where past and present are twisted together. These portraits embody what the poet Novalis once said: "Each person is a whole society in miniature."

We sense the gentle sadness of an old Thomas Mann, just returned from the States and photographed in Weimar for the 1949 bicentennial of Goethe's birth. We see the resolve in the face of Fritz Bauer, the courageous prosecutor at the Auschwitz trials. We feel the deep connection between the eternal wanderers Teofila and Marcel Reich-Ranicki. There too are Max Brod, Elisabeth Bergner, Tutti and Gottfried Berman-Fischer, Hilde Domin, Stefan Heym and Stephan Hermlin, Hans Jonas, Meret Oppenheim, Helene Weigel, Steffi and Camilla Spira, and many others. Stefan Moses has said, "Everyone has a vocation. Mine is to 'capture' people before they will be lost forever, but they shall keep on living for as long as we don't forget! That's how mere 'picture taking' became a lifelong memory project."