The Conquerors of the Sun is the most recent film project by Baumgart, combining clippings from feature and documentary films of the 1920th, reports of Turowskis research, interviews with other scientists dealing with the Russian and Polish avant-garde, as well as images from the media of today. 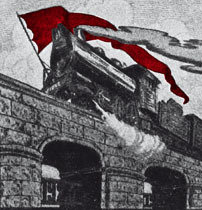 The Conquerors of the Sun (2012) is the most recent film project by Anna Baumgart, who is living in Warsaw. She has invited the historian of the avant-garde and art critic, Andrzej Turowski, to participate in it.
His book, The Locomotive of History, is an integral part of the project. Together they recreate the history of the propagandistic train which was supposed to get in 1920 from Russia via Poland to Berlin in order to support the German Communist Party, and to transport the ideas of the revolution to the West. In the years after the October Revolution in 1917 the propagandistic trains, which were designed by constructivists and suprematists, gained popularity; they transformed the public sphere and symbolised modernity. Like “moving images”, they trespassed the country, inside the wagons exhibitions, lectures and discussions were organised.

Baumgart's film combines clippings from feature and documentary films of the 1920th, reports of Turowskis research, interviews with other scientists dealing with the Russian and Polish avant-garde, as well as images from the media of today. The project speculates about the disposition of the train and the political and artistic aims related to it. Not only Russian artists, such as Kazimir Malevich and El Lissitzky, were involved, but also the Polish avant-gardists Katarzyno Kobro, Władysław Strzemiński and Henri Berlewi.

The title of the film refers to the Futurist opera The Victory over the Sun, staged in 1913 in St. Petersburg. Taming the sun, and thus disrupting the linear flow of time, was supposed to become the symbol of a total destruction of the existing order. Insofar the opera anticipated the revolution of 1917. The libretto by Aleksei Kruchonych and the prologue by Velimir Chlebnikov were written in the avant-garde language, ZAUM, which can be heart in Baumgart's film as well.
“The revolution continues worldwide” claims a slogan of the Occupy Wall Street movement. By including images of their protest marchs in her film, Baumgart refers to the recent political reality.

The exhibition is organized in cooperation with lokal_30, Warsaw, and supported by the Stiftung fur Deutsch-Polnische Zusammenarbeit.