Minimalism in Germany. The Sixties II

Abstraction and Seriality, Zero, Concrete Tendencies and Sculpture as Action. About 40 works by 12 artists linked with the cities of Frankfurt, Dusseldorf, Hamburg, Stuttgart and Berlin. Grids, structures, combinations and serial formations are significant concepts in German Minimalism. 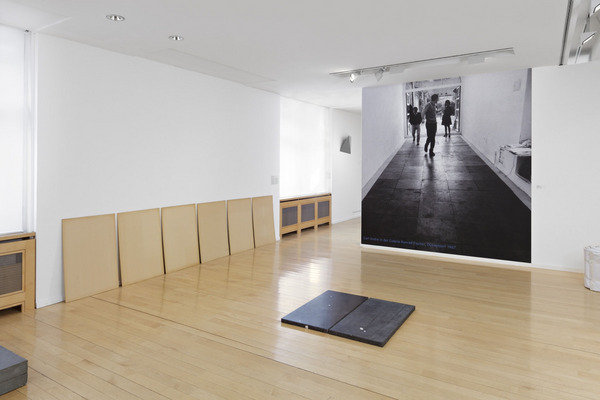 The ‘Minimalism in Germany. The Sixties’ exhibition is the second part of a series addressing tendencies of Minimalism Art in Germany in the 1960s. The first event in 2010 dealt with important trends in reduced, abstract art in the 1960s, and the current show concentrates on a small number of striking exponents who worked with large-scale works, serial picture objects or action-oriented work concepts. You are seeing about 40 works by 12 artists linked with the cities of Frankfurt, Düsseldorf, Hamburg, Stuttgart and Berlin.

In the early sixties in Germany, a new kind of Minimalism developed that was initially largely independent from the developments in America at the time. This German Minimalism was in many cases stimulated by, but also in conflict with, Concrete Art and the European Zero avant-garde, which drew attention to itself from 1957 on, starting in Düsseldorf, with unusually staged exhibitions and spectacular projects for public space.

The Düsseldorf Kunstakademie also played an important role in the transition to a specifically German Minimalism from 1962 until around 1970. Joseph Beuys took over the chair of monumental sculpture here in 1961; his sculptural vocabulary of reduced everyday forms— crates, felt and iron panels, angle iron, display cases, simple shelves, fabric objects, metal cubes—was interpreted from 1957 in the context of his work with actions, among other things. In the sixties, it provided many of his students with a basis for examining minimalized sculpture. At the same time, as a student of Karl Otto Götz, the young Franz Erhard Walther developed his first proto-Minimalist objects starting in 1962, followed in 1964/65 by Imi Knoebel, Imi Giese, and Blinky Palermo, students with Beuys in Düsseldorf. At the same time, Hanne Darboven in Hamburg, a student of the Zero artist Almir Mavignier, Posenenske in Offenbach (she studied with Willi Baumeister in Stuttgart 1951/52), and, outside academic contexts, Peter Roehr in Frankfurt conceived their first attempts at Minimalist works.

Many post-war artists living in Germany felt that they were inheriting a ravaged artistic landscape. Circa 1960, the center of current art developments shifted to New York. In the mid-1960s, Darboven, Uecker, Posenenske, Rückriem and Walther travelled to New York to exhibit their artwork there and to get into contact with other artists from this point onwards, Minimalism in Germany was based on an interplay between European and American movements and debates of the period.

What are the characteristics of ‘Minimalism in Germany in the 1960s’? Significant characteristics that we can point to include the purist reduction to basic geometric forms that can be seen in many artworks, the ordering of pictorial elements into mathematical and geometric sequences, the minimizing and applying of permutations to a visual figural language, anonymous materials and a depersonalized production process, translation of quantity (serial elements) into an aesthetic quality and individual artistic elements and decisions being negated, their authority suspended. Seriality as a factor of sculptural and pictorial composition becomes ‘the grammar of the whole work’ (Sol LeWitt).

Grids, structures, combinations and serial formations are significant concepts in German Minimalism. As Peter Roehr put it, the grid’s formal severity, clarity and simplicity doesn’t create “a composition” it creates a structure that he describes as “a regular fabric with identical objects”. Artists saw grid-shaped structures and serial sequences as aesthetic models for anti-hierarchical and antiauthoritarian systems as the antithesis of composed, hierarchically organized works.

Cultural and political philosophies could be said to have played a major role in the work of many of the artists featured in the exhibition, in ways that vary widely depending on the individual. Erich Buchholz sympathized with the Novembergruppe or ‘November Group’, Hanne Darboven expounded a social critique through an aesthetically emancipated concept of time, and Posenenske and Roehr’s serial artworks adopted an industrial aesthetic to express a commitment to process-oriented, democratic art production.

The artists’ widely varied relationships with space are extremely significant. In 1922, in his studio in Berlin, Erich Buchholz created a pictorial/sculptural spatial concept that was the first of its kind in Germany, reconstructing it as a model in 1966. In 1966, Günther Uecker created his Lichtregen, an artwork that invited viewers to walk through it and to make use of it. Ulrich Rückriem and Helmut Stromsky explored grey areas between drawings and sculptures, and Eckhard Schene and Franz Erhard Walther investigated spatial/perspectival and action-based concepts of sculpture.

One of the fundamental driving forces behind Minimalism was the desire to replace the ideologically contaminated material of the traditional art genre the pedestal, the bronze cast, the canvas, the frame with industrially-produced mass products. This allowed the desired de-individualization and objectification to be achieved even at the level of the materials used often achieving a shock effect at the same time. Visitors to the early exhibitions of Zero, Nouvelle Tendances and Minimalism were confronted with light and metals (Uecker), rough-worked stone slab (Rückriem), plywood and PVC sheeting (Schene), steel, cardboard and car body paint (Posenenske), folded paper, parcel paper and cotton (F.E. Walther).