Return to Noreturn. Her film 'Noreturn' and various elements that appear in it, such as a red and green curtain or the yellow and blue bunk beds are presented as separate pieces. Also a Tapis de Lecture (a book carpet including 20 book) is on display. On the occasion of the Gallery Weekend Berlin, the gallery presents "Slayer Metallica" a special project by Nathan Carter. 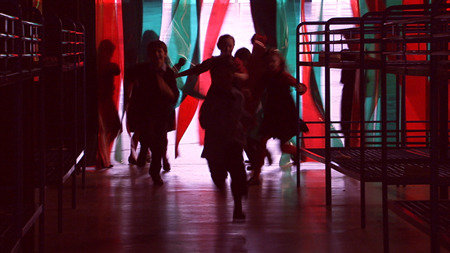 Esther Schipper is pleased to present a solo exhibition of new works by the French artist Dominique Gonzalez-Foerster.

Six months after returning from the Land of Oz, Dorothy Gale has become a melancholic child who cannot sleep, as she is obsessed with her memories of Oz.

Gonzalez-Foerster uses this quote of Walter Murch’s 1985-film Return to Oz as a starting point for her solo show "Return to Noreturn" at the gallery. Like Dorothy revisits Oz in her dream, the artist returns to her film Noreturn (2009), which was shot at the exhibition "TH.2085" in the Tate Modern’s Turbine Hall, to decompose and rearrange its content. Various elements that appear in the film, such as a red and green curtain or the yellow and blue bunk beds are presented as separate pieces. The film itself is shown in the second space and marks the end of the exhibition. Also a Tapis de Lecture (a book carpet including 20 book references to "TH.2058") will be on display, inviting the audience to read the bibliography of the exhibition.

A new performance will be shown at Tensta Konsthall, Sweden, in cooperation with the University of Dance and Circus, Stockholm, on 27 May 2012. The performance is based on Francois Truffaut’s 1966-film Fahrenheit 451.

Save the date: Gallery Weekend Berlin special on Friday 27 April, 4 - 9pm
Parallel to the exhibition of Dominique Gonzalez-Foerster and on the occasion of the Gallery Weekend Berlin, Esther Schipper presents "Slayer Metallica" a special project by Nathan Carter. In the gallery’s showroom, new drawings, sculptures and a diorama will be shown by Carter, who declares himself the “Keller Kaiser”. On Friday, 27 April, a bar and a curious taco truck with ceramic tequila cups by Jose Noe Suro will fill the backyard. The exhibition in the showroom will run through 28 July.