Ai Weiwei - New York. 1983-1993. The exhibition presents his shots from a collection of over 10,000 photographs that capture the history, culture, and atmosphere from his unique perspective on art and society. Simultaneously a selection of works Wim Wenders from the long-running project 'Pictures from the Surface of the Earth' which began in the early 1980s and continued for the next 20 years. 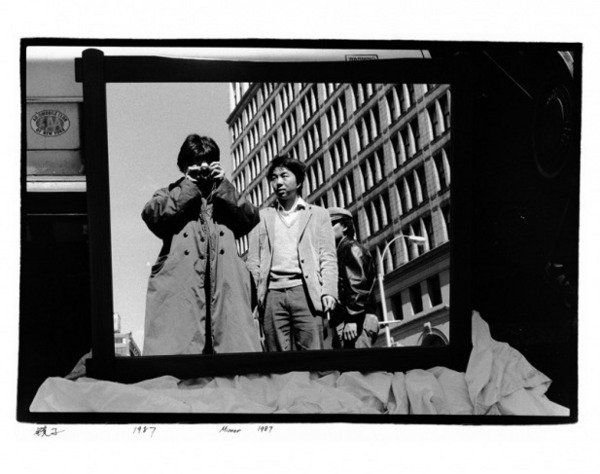 Presented by Three Shadow Art Gallery, Beijing, with the participation of Martin-Gropius-Bau, Berlin

The exhibition of Ai Weiwei ‘New York. 1983—1993’ presents his shots from a collection of over 10,000 photographs that capture the history, culture, and atmosphere of 1980s New York from his unique perspective on art and society.

There are photographs of East Village poetry readings, riots in Tompkins Square Park, drag queens from Wigstock, and visits by well-known artists and writers from China. The photographs not only document the changes of an era, but also reveal the world as seen through Ai Weiwei’s eyes and trace the beginnings of his conceptual art practice.

An important Chinese contemporary artist, Ai Weiwei is well known for his sculptures, installations, and architecture. Yet photography also plays an important role in his art practice. He has a distinct understanding of photography and has created some of his most iconic artworks with photographs.

The New York photographs are records of his life and work, which carry the stamp of that time. They are not a perfect chronicle of Ai Weiwei’s life, but rather scenes taken from his surroundings that reveal his thoughts and attitudes at the moment. The photographs are a valuable piece of visual history for both him personally and contemporary art.

These photos were taken between 1983 and 1994 during the decade I spent living in New York before returning to Beijing. At that time, I didn’t really have anything to do. I was just hanging out, whiling away my time everyday by taking pictures of the people I met, places I went, my friends, my neighborhood, the street and the city.

In a flash twenty years have past, and the New York I knew no longer exists. The appearance of the East Village has totally changed, and many of the people in my photographs are no longer in this world. I took these photos casually, and most of my subjects probably don’t even realize that they are in them. Today, looking back on the past, I can see that these photographs are facts, but not necessarily true. After all, any reality is just a factor of change — an unconfirmed moment in the slow march of time. The present always surpasses the past, and the future will not care about today.

What drives me to organize and publish these photographs is not nostalgia, for I believe that past occurrences do not matter much. We are not destined to meet those whom we’ve met, and humans are by nature lonely. Rather, the photos themselves are concrete objects that form a kind of orderly arrangement despite their free-floating nature as disassociated images on photo paper. The specific people and things involved, including my own past, are not important anymore.

Life in the past fifty years has been much like a falling leaf with no goal or direction. In the end, however, the leaf will land in some corner. The images’ appearance and order are much like this. They are disorganized, but paths of thought appear that seem most clear when the photos are all mixed up. Today, I still always have a camera in my hand, accustomed as I am to the click of the shutter. What I should explain though, is that I am not that interested in photography, and don’t really care about the subjects of my photos. In the end, they are part of a different reality than that of my own existence. Every time I look at these photographs, I always discover that there is more strangeness in them than familiarity.

Wim Wenders (b. 1945) is one of the most important figures to emerge from the New German Cinema period of the 1970s. Alongside directing atmospheric auteur films the artist works with the medium of photography. This exhibition brings together a selection of works from the long-running project Pictures from the Surface of the Earth which began in the early 1980s and continued for the next twenty years.

Working with Plaubel Makina and Fuji panoramic cameras, Wenders produces large-format prints which envelope the viewer, engulfing their field of vision. Each image captures a world that has been created or destroyed by nature and mankind alike. The organic landscapes and urban environments that the artist has encountered while on his nomadic and restless journey across the globe are thrown into focus. Travelling through Germany, Australia, America, Cuba, Israel and Japan, his fascinated gaze draws out the essence of a moment, place or space. Paradoxically, what often holds powerful presence within each photograph is the notion of disappearance. The line between cityscape and ‘desertscape’ becomes blurred as desolate views and inanimate objects suggest latent narratives — the stories of people who were once there.

Each photographic frame is precisely defined by Wenders so as to minimise any need for manipulation to the film negative. Colour, composition and form are in perfect harmony at the moment the shutter closes. The artist sees the contemporary digitization of photography as damaging the ‘reality’ represented in images. Accordingly, he has articulated the importance that the subjective angle or viewpoint has for him. As such, this series is both a portrait of the world as the photographer has encountered it, and a portrait of the photographer himself, as reflected in his view of the world.