Drawings and Watercolors, 1957-2008. About a hundred works on paper. Through monotypes, works using ink, pencil or watercolors, between accidental spills and drips of colors, gray or black monochrome prints, and the spontaneity of a sharp-edged, scratched or rubbed-out line, this exhibition traces Richter's very singular approach to drawing. 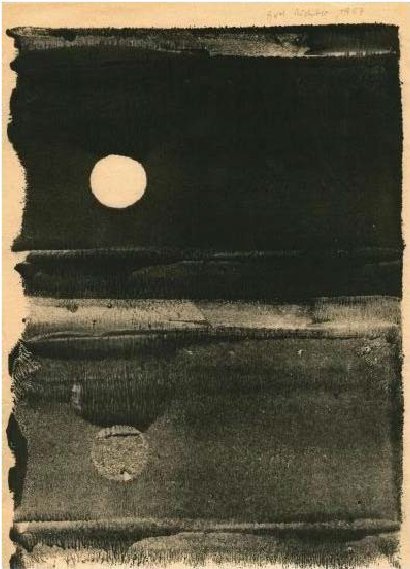 As a counterpoint to the major traveling retrospective devoted to the remarkable career of Gerhard Richter, initiated by Tate Modern (October 6, 2011–January 8, 2012), subsequently on view at the Berlin’s Neue Nationalgalerie (February 12–May 13, 2012), to be followed by the Centre Pompidou (June 6–September 24, 2012), the Louvre exhibits about a hundred works on paper in the Mollien rooms of the museum’s Department of Prints and Drawings.

Born in 1932 in Dresden, Gerhard Richter studied art at his native city’s Kunstakademie. He fled East Germany in 1961 and took up residence in Düsseldorf, where he continued his studies. Richter is one of the most important painters of the last fifty years, having first represented West Germany at the Venice Biennale in 1972.

From his early Elbe monotypes in 1957 (landscapes executed in black ink) and his Halifax series of tiny abstract pencil drawings beginning in 1978 to his November series of ink drawings in 2008, this exhibition at the Louvre explores, for the very first time in France, the full range of Richter’s works on paper.
Through monotypes, works using ink, pencil or watercolors, between accidental spills and drips of colors, gray or black monochrome prints, and the spontaneity of a sharp-edged, scratched or rubbed-out line, this exhibition traces Richter’s very singular approach to drawing. In its principles, this approach represents a perfect antithesis, far removed from the standard run of characteristics attributed to drawings. In fact, Richter has long steered clear of the craft-conscious, personal and aesthetic aspects of work in this area. His critical view of drawing, which he perceived as too artistic, was shared by several European artists in the post-war years, and led to radical reinventions, giving rise to new perspectives on this art form.

The exhibition reveals the rich diversity of works on paper, the special place held by drawing, and the threads of continuity in the career of one of the most influential artists of the twentieth century.

At the Centre Pompidou, the exhibition “Gerhard Richter: Panorama” is on view from June 6 to September 24, 2012.

The works are displayed in rooms 9 and 10 on the first floor of the Denon Wing.

Musée du Louvre
75058 Paris - France
Hours:
Open every day except Tuesdays, from 9 a.m. to 5:45 p.m.
Evening hours on Wednesdays and Fridays until 9:30 p.m.
Admission fees:
Access to the exhibition is included in the purchase of an admission to the museum’s permanent collections: €10.
Free admission for youths under 18, EU residents under 26, teachers holding the “Pass Education”, the unemployed, and holders of the “Louvre Familles”, “Louvre Jeunes”, “Louvre Professionnels” or “Amis du Louvre” cards at all times, and for all visitors the first Sunday of each month. Métro: Palais-Royal Musée du Louvre (lines 1 and 7)