The Bruce Lacey Experience. This survey of a rich and diverse artistic production is a celebration of both his vibrant life (which includes working with Spike Milligan, The Beatles and Ken Russell) and his art which reveals telling links with the visual culture of the last 60 years. Part of the show will be dedicated to Lacey's performance activities - a practice that began in the 1970s. The show will also explore the artist's childhood years and experiences. 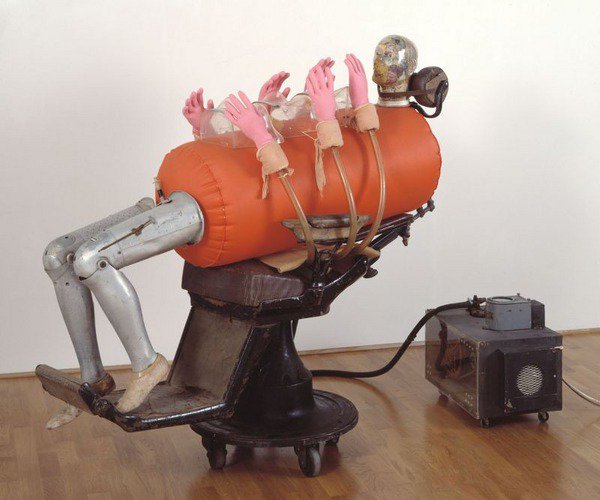 Bruce Lacey (born 1927) is one of Britain's great visionary artists. His lifetime pursuit of eccentric ‘making and doing’ has been a cathartic working-through of his experiences. This survey of a rich and diverse artistic production is a celebration of both his vibrant life (which includes working with Spike Milligan, The Beatles and Ken Russell) and his art which reveals telling links with the visual culture of the last 60 years. Co-curated by artist Jeremy Deller and art historian Professor David Alan Mellor, the exhibition charts Lacey’s artistic development in a career encompassing painting, sculpture, robotised assemblages, theatrical performances and installations, as well as community arts and ritual action performances.

Lacey has described his work as a type of personal psychotherapy which has intuitively responded to his emotional needs. This approach began in his early 20s; whilst hospitalised with tuberculosis after serving in the Royal Navy he started to draw macabre scenes and childhood memories. After his recovery in 1951, he enrolled at the Royal College of Art and simultaneously began his performance career with outrageous stunts drawn from circus and variety theatre.

Lacey often involved his family in his escapades, as revealed by Ken Russell’s 1962 documentary, The Preservation Man. In this film Russell captures Lacey’s flamboyance, his six children around him, revelling in a magical atmosphere. Around this time Lacey began constructing assemblages and machines expressing his feelings about the technologised and conservative Cold War society that surrounded him. He was hailed as a leading figure of the 'New Realism' and his assemblages took the form of full size kinetic automatons ('electric actors') including the comic figures of Old Moneybags, Clockface, Electric Man and Rosa Bosom. It was Rosa who won the ‘Alternative Miss World’ in 1985. A number of these are included in the exhibition. Lacey’s eccentricity and technical aptitude led to working relationships with performers such as Spike Milligan and Peter Sellers and he produced trick props for pioneering off-beat comedy shows. He also famously appeared as George Harrison’s flute playing gardener in The Beatles’ film Help.

Part of the show will be dedicated to Lacey’s performance activities – a practice that began in the 1970s and included performances with his collaborator Jill Bruce. Lacey revered the approach of pre-historic man in creating not for decorative or aesthetic ends but with the purpose of making something happen in the universe. He committed himself to becoming aligned with the mysterious forces of nature, becoming a transmitter and receiver of thoughts, ideas and energies. In the 1980s he returned to painting - which took the form of ritual diagrams and imagery, in shamanistic formats derived from performative endeavours.

The show will also explore Lacey’s childhood years and experiences. From an early age he gathered an extraordinary archive of bits and pieces, starting an obsessive process of collection and dispersal, from toys, stones and shells, to swords, pistols and shields. Born and brought up in London, Lacey continued living there until his production of performance rituals took him into the depths of the English countryside, and particularly to Norfolk where he has lived surrounded by his collections of ephemera since the 1980s.

The Bruce Lacey Experience will tour to The Exchange in Penzance in late September 2012. It coincides with the release of The Lacey Rituals: Films by Bruce Lacey and Friends, a DVD of restored films by BFI.