8.9.2012-21.10.2012. The work constitutes itself as an audio visual reflection on a span of time that is linked to the natural appearance and disappearance of light. Through small circular holes set on the building's windows the rooms are transformed in a sequence of camera obscuras. 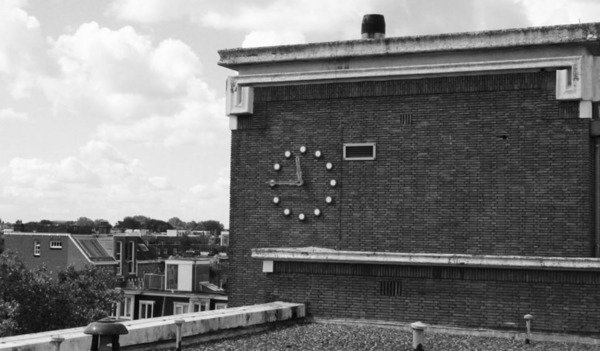 In collaboration with Emanuele Wiltsch Barberio

8.9.2012-21.10.2012 is the temporal frame that the artist Giorgio Andreotta Calò uses to provide the spectator with the possibility of physically and metaphorically entering into the dimension of changing and evolving time. Furthermore, the work constitutes itself as an audio visual reflection on a span of time that is linked to the natural appearance and disappearance of light. As the title and the opening hours suggest, the intervention evolves between the sunrise and the sunset of each single day. Through small circular holes set on the building’s windows the rooms are de facto transformed in a sequence of camera obscuras, where the outside world is given the chance enter and interact with an environment designed basically with sound. At first sight, the spectator senses nothing more than pure darkness inhabited by a sort of familiar murmur. All seems so deeply anonymous and abstract that one starts to feel the heaviness of corporal gravity. Immersed in this dark sound landscape, the body feels “dislocated”, part of something unknown and distant, an experience strengthened by the impossibility to see or perceive what will happen next.

Nothing really happens in the obscurity but the flow and reflow of time. However, recognition happens slowly as the floor becomes lit by the moving image of a changing sky. It is real sky that is projected, a "real-time" fragment of it, not of a fictitious one. The tiny sources of light therefore give the spectator a direction, and while the moving sky projections become increasingly visible - due to the eye adapting to the darkness - the sound expands and evolves as if it were the voice of a non-human consciousness that inhabits the rooms. What is beating is the transfigured murmur of a clock mechanism; a sound that symbolically states and indicates that something is passing, verging continuously toward an end, without breaks. It is in fact the murmur of the clock that is situated the building's own clock tower. Thanks to Emanuele Wiltsch Barberio, this same murmur gets incremented, its frequency evidenced and its presence translated into a sound piece that inscribes an unusual temporal deepness in the architectonical field of the work, providing a precise suspension effect which unveils that, after all, the locus of the work is the mental space that governs our minds.

Thus, the work might be primarily explained as a space made of and for consciousness, the very locus of human life, where perceptions are repeatedly questioned, and where time appears in its extraordinary power: as nothing more than a universal fragment that separates life from death. But, 8.9.2012-21.10.2012 can also be seen as a homage to the Flemish painting Visions of Hereafter, by Hieronymus Bosch (1490), where we observe people in the dark watching others entering into the mystic passage classically pictured as a light conical corridor. In this sense the whole sound-landscape recreated at SMART Project Space might even be seen as a limbo-like place where the juncture of life’s extremities appear to the extent that our consciousness reacts by suggesting to us that there is another time, there is another frequency, a dimension where a new existence is truly possible. At least, it seems, this might be possible between 8.9.2012 and 21.10.2012.

Emanuele Wiltsch Barberio's work as musician and sound designer is based on interdisciplinary research and integration. After approaching music education in Seattle and London (1999-2003), he has produced for theater, dance, performances and visual arts. He has performed in solo and in collaboration under different names for soundtracks and recordings, among which Tidal Wave, A+A, Venice (2011);Madriema, Musica per Finestrini (2010); Fluxus, Kiluanji Kia Henda, Bevilacqua la Masa, Venice (2010); Venetian Suite, Paki Zennaro & Carolyn Carlson (2010). He has been collaborating with Giorgio Andreotta Calò since 2004. His works have been presented at NABA - Arts and Design Academy,Milan (2012); Mare Bianco, Salone del Mobile, Milan (2012); Centro Culturale Candiani, Venice (2012); Yerebatan Sarnici, Istanbul (2012); Your Country Doesn't Exist, Icelandic Pavillion, 54th International Venice Biennale (2011).

12:00 - 12:30 hrs
ORA: live sound performance by Emanuele Wiltsch Barberio live from the clock tower. By manipulating the sound in real-time, sonic timescapes will unveil the multiple shades of the building's temporal heartbeat within Giorgio Andreotta Calo's 08.09.2012 - 21.10.2012.