Bringing together nine works which have recently entered the Museum's collection of Media and Performance Art, the exhibition reflects the variety of the artists' practices, perspectives and backgrounds. It raises questions about how the past is constructed and how it can inform the present and the future. The practices exemplified in the works on view, which include revisiting existing narratives and examining one's own cultural, social and personal history, are not bound to a specific medium. 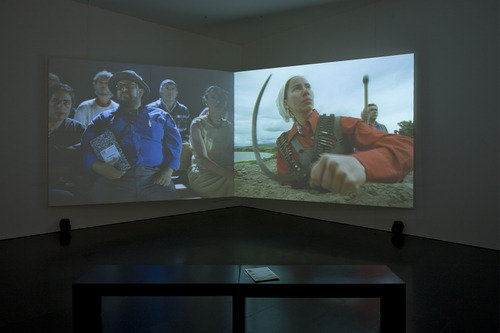 The Museum of Modern Art presents Performing Histories (1), the first of a two-part exhibition of media artworks that engage with history in various ways, from September 12, 2012, to March 11, 2013, in the Yoshiko and Akio Morita Gallery. Bringing together nine works which have recently entered the Museum’s collection of Media and Performance Art, the exhibition reflects the variety of the artists’ practices, perspectives, and backgrounds, and raises questions about how the past is constructed and how it can inform the present and the future. Featured in the exhibition are works by Kader Attia (French, b. 1970), Andrea Fraser (American, b. 1965), Ion Grigorescu (Romanian, b. 1945), Sharon Hayes (American, b. 1970), Dorit Margreiter (Austrian, b. 1967), Deimantas Narkevičius (Lithuanian, b. 1964), and Martha Rosler (American, b. 1943). Performing Histories (1) is organized by Sabine Breitwieser, Chief Curator, with Martin Hartung, Curatorial Assistant, Department of Media and Performance Art.

The practices exemplified in the works on view, which include revisiting existing narratives and examining one’s own cultural, social, and personal history, are not bound to a specific medium. They are part of a critical artistic practice in which artists have a general interest in revealing unknown aspects or even constructing new perspectives on history. In recent decades, artists have increasingly employed a performative approach in dialogue with cinematic and photographic mediums, such as film, slide projection, video, and photography to provide new readings of history and open it to a multitude of narratives.

Among the works on view is Kader Attia’s Open Your Eyes (2010), a double slide projection based on extensive research undertaken by the artist on the notion of modern Western aesthetics. Attia addresses the subject through the issue of repair to the human body, which he compares to the evolution of repair in the non-Occidental world via photographs of objects and documents at the storage facilities of museums like the Smithsonian National Museum of African Art in Washington D.C., and various military museums in Europe. This work was the initial project for Attia’s large-scale installation The Repair (2012) on view at dOCUMENTA (13) in Kassel, Germany. Deimantas Narkevičius’ film Once in the XX Century (2004) and Dorit Margreiter’s film installation zentrum (2004-11) explore the role of film as both document and medium involved in history in controversial ways. In Once in the XX Century, Narkevičius manipulates existing television footage that documents the action of the Lithuanian people taking down a sculpture of Lenin in 1991, so that it looks as if the crowd is preparing and then celebrating the erection of the sculpture. The artist’s historical reversal ironically points to other scenes in history with regard to the longing for or denial of political and economic systems. Margreiter’s zentrum is a filmic reconstruction and performance featuring a broken neon sign in Leipzig in the former German Democratic Republic. The work reflects on modernity’s relationship with the moving image, design, and politics, situating the aesthetics of socialist modernism in the 21st-century. Romanian artist Ion Grigorescu employed film to create intimate experimentations staged secretly in his home using his own body within the context of an imploding nation. Andrea Fraser’s split-screen video installation Soldadera (Scenes from Un Banquete en Tetlapayac, a film by Olivier Debroise) (1998/2001), in which the artist performs a double role, represents a splitting within the structure of the artistic field that becomes a framework for examining the fate of certain radical utopian and revolutionary impulses in 20th-century art. In Sharon Hayes’ installation The Interpreter Project (2001), the artist “re-interprets” actual tours through the historic houses of four prominent American women pointing to the specificity and particularity of the construction of a “feminized” historical narrative.

Another noted work is Martha Rosler’s She Sees in Herself a New Woman Every Day (1976), which is composed of 12 color photographs of a woman’s shoes and legs arranged in a grid on the floor, accompanied by an audiotape of a woman having an imaginary talk with her mother. Rosler uses the combination of her narration and the images of her own body to critically examine perceptions of female identity, in a way that is at once personal and universal. Exploring social and political conditions and reconsidering their own personal pasts, the participating artists in Performing Histories (1) have deconstructed, reassembled, and re- performed histories, focusing on the ambiguity of history and the impact of ideologies on individual and collective consciousness. Performing Histories (2) will present works by Wael Shawky (Egypt, b. 1971) and Chen Shaoxiong (China, b. 1962), and the exhibition will take place in the Media Gallery from April to October 2013. Along with the exhibition, a series of live performances under the title Performing Histories will be held in the Museum galleries. A special section in the MoMA Media Lounge will also be dedicated to videos related to the exhibition. SPONSORSHIP: Performing Histories (1) is made possible by MoMA’s Wallis Annenberg Fund for Innovation in Contemporary Art through the Annenberg Foundation.

PERFORMANCE PROGRAM: In addition to the exhibition, a number of live performances will be held in the Museum also under the title Performing Histories. A three-part performance series, Performing Histories will be held in conjunction with three exhibitions at MoMA: Performing Histories (1), Tokyo 1950–1970: A New Avant-Garde (November 18, 2012–February 25, 2013), and Inventing Abstraction, 1910–1925 (December 23, 2012–April 15, 2013). The series begins on September 12, 2012, in The Roy and Niuta Titus Theater 2, with Los Angeles-based artist Andrea Fraser’s Men on the Line: Men Committed to Feminism, KPFK, 1972 (2012), a performance based on a radio broadcast from 1972 in which four men discussed a variety of issues related to feminism. Fraser transcribed and edited the broadcast and performs as all four participants, re-enacting in her own performance their struggle to experience empathy across the boundaries of gender identity. By voicing and embodying these multiple male perspectives, the performance engages long-standing debates about gender and women's liberation, and in doing so, it recalls some of the key concerns of feminist movements, past and present. Among these concerns are issues of essentialism, separatism, and the relationship between feminist struggles and other forms of domination, along with questions surrounding the construction, internalization, and reproduction of social norms and identities. Men on the Line was originally produced by West of Rome, curated by Emi Fontana for the Pacific Standard Time Performance and Public Art Festival, and organized by the Getty Research Institute and LA>