Visions feat. Cotton made in Africa. His photographs made exclusively in Benin in December 2011 form the heart of the show. They present the smallholders associated with the 'Cotton made in Africa' initiative and introduce us to their world. Various rooms are dedicated to early work groups and classics, mainly small-format vintage prints that Watson himself made in the darkroom. 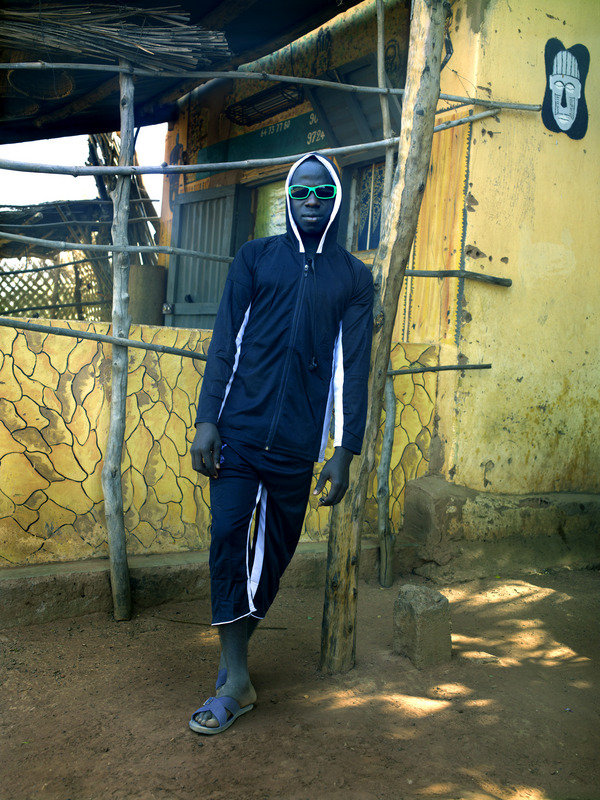 Albert Watson is definitely one of the world’s most successful fashion and ad photographers of recent decades. Born in Scotland, he is now based in New York and his oeuvre stands out for its diversity and the wealth of different sides to it. Watson is associated with unusual and powerful portraits, among others of Naomi Campbell, Mick Jagger and Alfred Hitchcock, images that catch the eye for their refined compositions and use of light. Of late, Watson’s pictures have often be presented in a constellation of cross-genre, large-format pieces destined to emphasize his philosophy of diversity.

The exhibition on VISIONS FEAT. COTTON MADE IN AFRICA that will be held at Haus der Photographie in Hamburg’s Deichtorhallen from September 14, 2012 to January 6, 2013 in cooperation with the Aid by Trade foundation, takes a new curatorial approach to presenting Albert Watson’s oeuvre. The exhibition has two sections: the Albert Watson photographs made exclusively in Benin in December 2011 form the heart of the show. They present the smallholders associated with the »Cotton made in Africa« initiative and introduce us to their world, thus visualizing the initiative’s social impact. »Cotton made in Africa« is organized by the Aid by Trade foundation and helps self-help through trade.

The exhibition nevertheless emphatically hinges on Watson’s impressive images of Africa. These respectful photographic works tell the tales of the smallholders, of the people who form the backbone of the »Cotton made in Africa« initiative and its work. Watson’s snapshots constitute fragments of reality from the life of the African cotton farmers, offering silent observations that take the viewer along on the trip round Benin.

Alongside the current photographic fruit of his trip round Benin, various rooms are dedicated to early work groups and classics, mainly small-format vintage prints that Watson himself made in the darkroom. Here, special emphasis is laid on the degree to which his photographs are always the result of a process, something borne out by the Polaroids, contact sheets and projects sketches that are all on public show for the first time. This encourages viewers to actively explore Watson’s artistic strategy and the sheer breadth of the different genres, without losing sight of the roots of the various work groups. In the extraordinary architecture of Haus der Photographie, fashion and lifestyle images are presented in a new way alongside incisive, powerfully energetic landscape and portrait shots as well as still lifes from Morocco, Las Vegas and the world of the Benin cotton farmers.

ALBERT WATSON
Over his four decades as one of the world’s preeminent photographers, Watson has used his powerful, graphic style to create images for hundreds of magazines, such as Vogue, GQ and Rolling Stone, along with successful advertising campaigns for major corporations. All the while, Watson has spent much of his time working on personal projects, creating stunning images from his travels and interests, from Marrakech to Las Vegas. Much of this work, along with his well-known celebrity portraits and fashion pho- tographs, has been featured in museums and gallery shows worldwide. The photo industry bible, Photo District News, named Albert one of the 20 most influential photographers of all time.

Born in 1942 in Edinburgh, Scotland, Watson studied graphic design in Dundee, followed by film studies at the London Royal College of Art in the late 1960s. After moving to the U.S. in 1970, he soon got the chance to earn his living with photography. He has directed more than 200 TV commercials, shot hundreds of covers of fashion magazines (100 covers for Vogue alone) as well as movie posters (e.g. »Kill Bill« and »The DaVinci Code«).
Until the early 1990s, Watson was most well-known for his fashion photography and shots of supermodels such as Kate Moss and Naomi Campbell, and for his campaigns for companies like Prada and Chanel. With his groundbreaking images of celebrities, including Alfred Hitchcock, Mick Jagger and Mike Tyson, Watson raised the bar of portrait photography and made himself an icon in the field.

Besides several exhibitions at the world’s leading galleries and museums (e.g. Metropolitan Museum of Arts in New York and the National Portrait Gallery in London), Watson has also had numerous solo shows in Europe since 2004. During the course of his career, he published six books, including the award- winning »Cyclops« (1994), »Maroc« (1998), and more recently »UFO: Unified Fashion Objectives« (2010), and »Strip Search« (2010).

PUBLIC GUIDED TOURS Every Sat. and Sun. at 3 p.m.

OPENING: on Thursday, September 13, 2012 at 7.30 pm at the House of Photography, Deichtorhallen Hamburg. Albert Watson will be present.

PRESS CONFERENCE: on Thursday, September 13, 2012 at 11 am at the House of Photography, Deichtorhallen Hamburg. Albert Watson will be present.