L'ellipse d'ellipse. The exhibition brings together different aspects of his diverse body of work, while also pointing to the recurrent questions at its heart: sculpture, film, photography, collage, and architectural intervention. 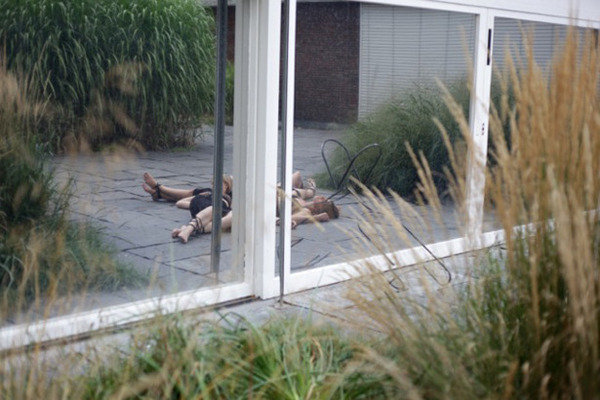 The Institut d’art contemporain, Villeurbanne/Rhône-Alpes presents L’ellipse d’ellipse, the largest solo exhibition to date of Bosnian-French artist Bojan Šarčević (b. 1974). The exhibition assembles more than thirty works from every medium the artist has worked in—sculpture, film, photography, collage, and architectural intervention—offering an overview of his entire practice.

From his early architectural interventions like World Corner (1999), the corner of a decrepit building extracted and inserted into a corner of the white cube exhibition space, to his architectonic pavilions for 16mm films (2007 and 2009), and from his collages made from found pages of architectural magazines, 1954 (2004), to his most recent, monumental onyx sculptures, She and He (2010 and 2011), Šarčević’s work reveals itself to be emphatically concerned with sculpture and space - their perception, as well as their social, political and poetic implications. Their alternating intense materiality or fragile ephemerality is presented alongside a number of his most recent film and photographic works, which underscore the artist’s questioning of representation—the ability for a still or moving image to capture the essence of a thing—as much as his questioning of sculpture itself.

L'ellipse d'ellipse brings together different aspects of Šarčević's diverse body of work, while also pointing to the recurrent questions at its heart: his sensual, elegant forms often evoke the histories of architectural modernism and the early twentieth century aesthetic experiments while using minimal gestures to substantive critical and conceptual effect. The translation of ideas and forms across cultures and time and the political resonance of certain materials and structures drive his interrogations. So, too, do the geometries of his forms hold questions of how the personal and social meet in the artwork, how precision and beauty coincide with the political and cultural, and, finally, whether an artist can determine the consequences of his or her actions at all. The exhibition title, L’ellipse d’ellipse, with its evocations of a geometric curvilinear figure, is at once a play on words and a way of pointing to the survey exhibition’s return to fundamental ideas that were there, he tells us, all along.

Bojan Šarčević was born in Belgrade (former Yugoslavia) in 1974; he lives and works in Berlin and Paris. Previous solo exhibitions include: A Curious Contortion in the Method of Progress, Kunstmuseum Liechtenstein, Vaduz (2012), Only After Dark, Kunstverein Hamburg (2008) and Credac, Ivry-sur-Seine (2007); Already Vanishing, MAMbo, Bologna (2007). He has participated in a number of international group exhibitions, including the Venice Biennale in 2003.

Publication
A fully illustrated catalogue with contributions by Martin Herbert, Michel Gauthier, Christiane Meyer-Stoll and an introduction by Nathalie Ergino, will be copublished after the exhibition by the Institut d’art contemporain, Villeurbanne/Rhône-Alpes and the Kunstmuseum Liechtenstein, Vaduz.