For this exhibition the Museum reconstructs a work the american artist created specifically for its ground floor hall: the installation 'Split Wall with Drains' (1994-95). The piece stands at the center of a show dedicated for the most part to works by Gober held by the collections of the Offentliche Kunstsammlung and the Emanuel Hoffmann Foundation. 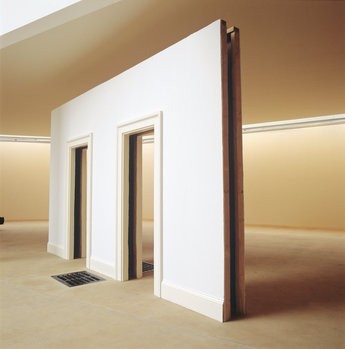 Works from the Emanuel Hoffmann Foundation and the Öffentlichen Kunstsammlung Basel

For this exhibition, the Museum für Gegenwartskunst reconstructs a work the American artist Robert Gober created specifically for its ground floor hall: the installation Split Wall with Drains (1994–95). The piece stands at the center of a show dedicated for the most part to works by Gober held by the collections of the Öffentliche Kunstsammlung and the Emanuel Hoffmann Foundation. After the major survey exhibition held at the Schaulager, Basel, in 2007, this eminent oeuvre, in which replicas of domestic objects such as washbasins, fireplaces, and drains, effigies of body parts, and reproductions of specific spaces with institutional or religious connotations play a central part, will be presented to the public in a new exhibition produced once again in close collaboration with the artist.

The motif of the drain to which Gober returns here appears early in his work: starting in 1989, he designed a number of simple but individual plugholes, had them cast, and then installed them directly in the walls of exhibition spaces (Drains). The drain marks the boundary between light and darkness, between what is visible and what is concealed, between inside and outside.

The installation may be read as an allegory of transition, precisely revealing the spots that are invisible as such. Unequivocal categories of inside and outside or above and below that would offer orientation in space have been abandoned. What emerge in their stead are unfamiliar zones with newly delineated boundaries in which the realm of bodily experience is central. Yet even when beheld from a distance, the sculpture commands the entire room, vaguely and uneasily suggesting both a film set and a crime scene.

With its overwhelming artistic quality, Split Walls with Drains not only represents a culmination of Gober’s sculptural oeuvre, and especially of the handmade washbasins, drains, and urinals; it is also singular in that it was conceived for the unique situation at the MGK, which is itself traversed by a brook, and will thus remain permanently rooted in our house.