If the Colour Changes. Bochner shares with other artists who emerged in the 1960s, including Sol LeWitt, Eva Hesse and Robert Smithson, an interest in using rationalising systems - numbers, measurements, definitions - to explore the irrational and provisional nature of being. This season of artists' film (Artists Film International) explores collective memory and personal and political histories. 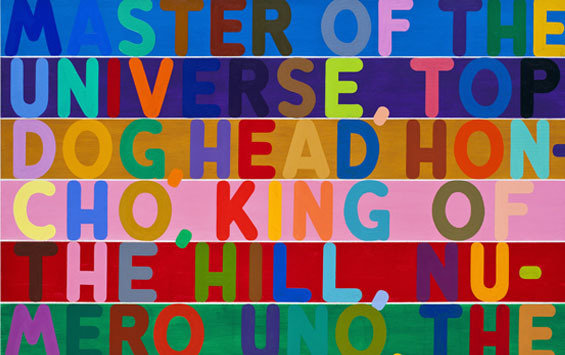 Descending from phrases such as ‘top dog’ and ‘king of the hill’ into macho mantras such as ‘rule with an iron hand’, the latest paintings of American artist Mel Bochner (b. 1940) use a thesaurus to generate word chains that are both mordantly funny and bursting with colour.

Bochner shares with other artists who emerged in the 1960s, including Sol LeWitt, Eva Hesse and Robert Smithson, an interest in using rationalising systems - numbers, measurements, definitions - to explore the irrational and provisional nature of being.

Tracing nearly 50 years of work, this exhibition commences with Blah, Blah, Blah (2011) a huge painting that encapsulates Bochner’s ongoing fascination with language and with colour. Across the floor, blue squares are spray-painted onto newspapers in a fusion of geometric abstraction with current affairs. Giant crumpled photographs in lurid colours, described by the New Yorker as ‘like road maps found stuffed in the glove compartment’, hang around the walls.

In a reprise of Marcel Duchamp’s painting Nude Descending a Staircase, a scattering of 48 inch lines occupies the Gallery staircase. At the top No Thought Exists Without A Sustaining Support (1970), is chalked onto a blackboard that appears to drip down the wall. Exuberant planes of colour leap across the walls of Gallery 9 with Two Planar Arcs (1977) and a sculpture made in vividly chromatic chunks of raw glass.

Gallery 8 is devoted to the vast Event Horizon (1998) and ‘Thesaurus’ paintings, including Amazing! (2011) featuring exclamations from ‘awesome!’ and ‘groovy!’ to ‘gnarly!’ and ‘omg!’, whose letters and words advance or recede according to the shade. Bochner takes us on a cerebral, optical and physical journey.

This season of artists’ film explores collective memory and personal and political histories. Ben Hagari’s Invert (2010) is an homage to celluloid film in which we see the world inverted in the colours of the photographic negative, while Sefer Memisoglu’s film Breeze (2011) reflects the artist’s interest in the power of iconic documentary images and new digital media.

Nguyen Trinh Thi’s Song to the Front (2011–12) abstracts a feature-length 1970s Vietnamese propaganda film and its aesthetic and political elements into a 5-minute vignette. Finally, re-examining historical perspective, Karim Debbagh’s 2006 film Creating a Legend, builds a portrait of the writer Paul Bowles through first hand accounts of his Moroccan companions.