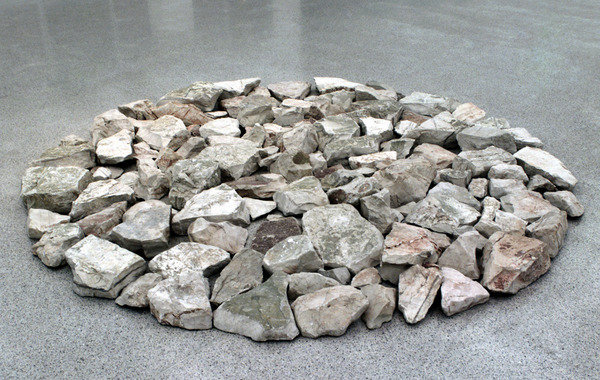 Parallel to the special exhibition Dan Flavin: Lights, mumok presents a representative selection of its holdings of minimal Minimal, Concept, and Land Art. Poetry of Reduction, with more than 40 works, looks at the issues central to the neo-avant- garde art movements from 1960s and 1970s, placing Dan Flavin’s oeuvre in a broad international context. Alongside important works from the museum’s collection, including works by Donald Judd, Sol LeWitt, Bruce Nauman, John Baldessari, Richard Long, Charlotte Posenenske, and VALIE EXPORT, four new acquisitions by Joan Jonas, Robert Smithson, and Gordon Matta-Clark are also on view. By turning away from traditional art disciplines, these movements represented a departure towards a new art that addressed space, the body, and the beholder and which reflects on its own institutional and social conditions. The artistic striving for clarity and analytical precision is usually expressed in a concentrated and reduced formal language. The exhibition at mumok shows that this reduction does not exclude the sensual and the poetic, but on the contrary allows it to be seen in a new light.

Minimal Art: Reduction of Forms
The sober forms of Minimal Art, which resisted the illusionism of painting, contain strikingly sensual and poetic aspects. Through the reduction of forms, their perception is experienced as a subjective act in which the work, the space, and our own corporeality are sensually linked to one another. As Donald Judd himself noted, it is this very simplicity that heightened the complexity of the works. In various ways, this can be traced out in his own works as well as those of Carl Andre, Sol LeWitt, and Walter de Maria.
Various forms of transition from the painting to the object are exhibited by works in the realm of Minimal Art that redefine with the form and the concept of the image its relationship to its surroundings. Frank Stella, Robert Mangold, Joe Baer, Alan Charlton, and Karel Malich have contributed central works along these lines with their pictures as objects, and Michelangelo Pistoletto, Keith Sonnier, and Dan Flavin, who use mirrors and/or light to promote the dissolution of the conventional image and the opposition between work and beholder.

Concept Art: Language as a Motif of the Work It was only natural that a generation of artists schooled in theory would come to not only use language as a medium of description and interpretation, but also as a motif in their work itself. Here, art is understood as a play of definitions that allows the linguistic and immaterial dimensions to come to the foreground.
The foundations for the use of language that flourished in Conceptual Art can be found in Ludwig Wittgenstein’s expanded notion of language and a sensitivity for language as a form of action in philosophical structuralism. The works of Joseph Kosuth, Lawrence Weiner, and John Baldessari show approaches to using language artistically that link insights from philosophy, psychology, and art with one another. Peter Weibel, Heinz Gappmayr, František Lesák, Gerhard Rühm and the artists of the Vienna Group refer in their visual poetry to language itself by placing linguistic signs in visual, object, or actionist contexts.

Architecture, the Body, Space
Beginning in the second half of the 1960s, artists from various disciplines and contexts subjected the geometrical formal vocabulary of Minimal Art and its inherent positivism to a critical reevaluation. They expanded the formal language of Minimal Art by adding corporeal, psychological, and processual moments and used the possibilities of performance, music, literature, photography, and film to explore questions of individual and collective experience. Artistic work was placed consciously in a context with the conditions of the surrounding space, the city, the landscape, and social reality.
VALIE EXPORT, Dan Graham, Joan Jonas, and Gordon Matta-Clark linked in various ways architecture, the body, and minimalist geometry to one another, questioning urban and/or constructed space as a site of physical and social experience. With his slide installation Da gefällt’s mir besser als in Westfalen, El Dorado (1968– 1976) Lothar Baumgarten presents the beholders with an apparently tropical natural idyll. In this scenario, the borders between naturalness and artificiality blur. The perception of nature is revealed to be an illusion; the concrete experience of the individual and the other is guided by ideologies and beliefs.

Land Art: Expansion of the Exhibition Space
In the attempt to leave the spatial limitations of the exhibition space behind them, artists of Land Art moved artistic work to natural surroundings in the 1970s. In so doing, Richard Long, Dennis Oppenheim, Robert Smithson and other artists not only redefined the conditions of the site of exhibition, but also placed the perception of art and/or the art business forms of presentation and marketing up for debate. The works of the American artist Bruce Nauman expand and question the principles of Minimal Art in performances and installations that activate the emotional spectrum of the beholder. Nauman’s first films, seemingly made without artistic intent, show performative appearances of the artist in his own studio. In these films, Nauman completed simple actions along the limits of the space or given geometric forms.

In an exemplary fashion, Bruce Nauman’s installation Audio-Video Underground Chamber (1972/1974) problematizes the unmediated viewing of an artwork. A long, hollow concrete block, whose shape recalls typical objects of Minimalist Art, was placed not in the exhibition space, but buried somewhere on the grounds of MuseumsQuartier. The inaccessible space is equipped with a lamp, a camera, and a microphone. The image that the camera transmits live from the exhibition space can be seen on a monitor in the museum. The experience of the work is now one mediated through video. With our gaze focused on this narrow, isolated space, Nauman activates spatial borderline experiences, feelings of the uncanny, getting buried alive, an existential experience that the simple and reduced form of the concrete block is able to evoke.