The Color of the Sky Has Melted. Visitors are met with an expansive wall at the gallery entrance that leads to his startling Aetheric Plexus (2009), a huge sound-and-lighting rig that blasts 13,000 watts of white light and 105 decibels of white noise. The exhibition also features works from Mass Black Implosion series, This is not my world (2006 - ) banner series and other works. 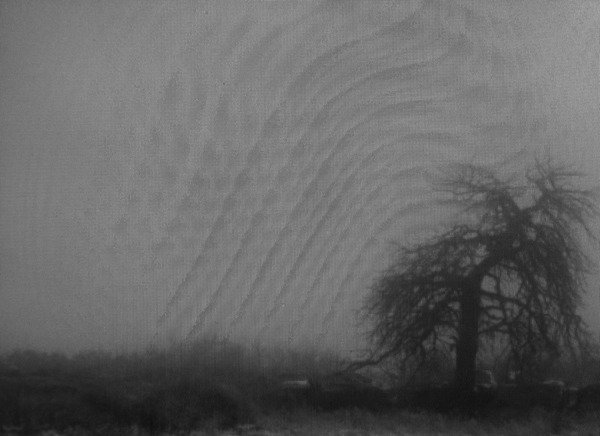 Marco Fusinato’s The Color of the Sky Has Melted will transform the Artspace galleries into an energetic investigation of the state — and experience — of the spectacle.

Fusinato explains, ‘You’re in a privileged position as an artist to be able to exhibit and have people come and see what you do, so why not have those people come and think about something that might be from outside their sphere? I’m interested in using the forum of art to present something that might be confronting or that questions the value system in which it’s shown.’

Artspace will completely transform the configuration of its galleries for Fusinato’s major solo exhibition. Visitors will be met with an expansive wall at the gallery entrance that will lead to Fusinato’s startling Aetheric Plexus (2009), a huge sound-and-lighting rig that blasts 13,000 watts of white light and 105 decibels of white noise.

The Color of the Sky will also feature works from the artist’s Mass Black Implosion series (2007 – ), in which the artist takes scores by avant-garde composers like Iannis Xenakis and John Cage, drawing lines from every note of the musical score to an arbitrary point as a proposition for new noise pieces. Via a selection of Fusinato’s Double Infinitive works audiences will be introduced to heroically scaled found images of anonymous rioters presented as simultaneous exemplifications of an authentic archetype of revolt and clichéd mainstream media characterisations of rebellion.

The exhibition will also feature a new work from the artist’s THIS IS NOT MY WORLD (2006 – ) banner series, produced with typographer Joseph Churchward to reconfigure the slogan plucked from a 1976 banner by Croatian Group of Six member Željko Jerman. The 14-metre-long work will be suspended from the gallery ceiling, and will lead visitors into a large single-channel projection of Fusinato’s Free (1998-2004). Free follows the artist as he hosts impromptu noise performances in unsuspecting music shops under the guise of testing a new electric guitar.

Fusinato also works as a musician in the avant-garde noise music tradition, exploring the use and abuse of electric guitars. He has collaborated with such musicians as Sonic Youth’s Thurston Moore and The Dead C’s Bruce Russell. Fusinato’s recent album releases include Ripping Skies (2009) and Ambianxe (2010). Fusinato will present a durational noise performance at Artspace as part of The Color of the Sky Has Melted on Saturday 3 November from 11am to 5pm.

Marco Fusinato has exhibited extensively within Australia and internationally. He was the subject of a profile in Artforum last year and his work was featured in this year’s Adelaide Biennale Parallel Collisions (which was titled after one of his works). Fusinato is exhibiting in the 30th São Paulo Biennial this year. He is represented by Anna Schwartz Gallery, Melbourne and Sydney.

Marco Fusinato’s The Color of the Sky Has Melted marks Artspace’s ongoing commitment to the production and presentation of large-scale solo exhibitions with artists from Australia and abroad.

The Color of the Sky Has Melted follows such projects by Shaun Gladwell (2007), Raquel Ormella (2009) and in conjunction with Sydney Festival 2011, Singaporean artist/filmmaker Ho Tzu Nyen. The Color of the Sky Has Melted is currently on exhibition at the Institute of Modern Art, Brisbane (11 August – 6 October 2012). This is the third such exhibition partnership in recent years between Artspace and IMA, following Peter Robinson’s Polymer Monoliths (2009) and Rose Nolan’s Why Do We Do The Things We Do? (2008).

Image: Marco Fusinato, The Color of the Sky Has Melted, 2012, courtesy of the artist and Anna Schwartz Gallery, Melbourne and Sydney

Noise performance on Saturday 3 November from 11am to 5pm.