Ear Tone Box. Three boxes clothed in fabric and metal, embedded with transducers and placed in different positions within the gallery. Each box emits a pair of tones that is designed to bring about the production of a third distinct tone. 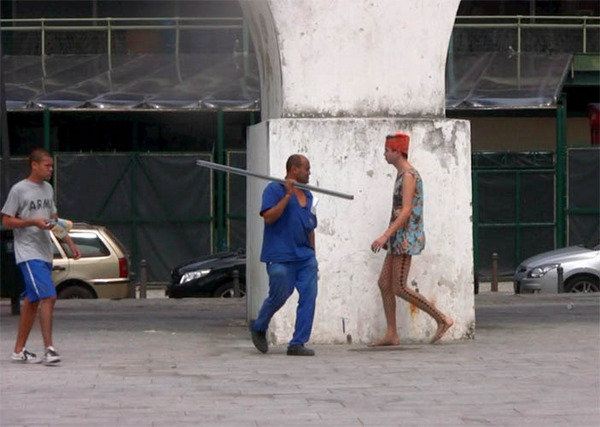 Trained as a composer, Sergei Tcherepnin (b. 1981) works at the intersections of sound, sculpture, and theatre. Connecting computers and amplifiers to surface transducers — devices that convert electrical signals into vibrations — he orchestrates complex multi-channel compositions in which objects are transformed into speakers. These objects often take on hybridized personalities, becoming strange characters that invite various kinds of play between things and bodies, suggesting new possibilities for intimacy with sound.

Central to Tcherepnin’s exhibition at Murray Guy are three boxes clothed in fabric and metal, embedded with transducers and placed in different positions within the gallery. Each box emits a pair of tones that is designed to bring about the production of a third distinct tone — the “eartone” or “difference tone” — within the listener’s inner ear. Many of these performed tones alternate in patterns that are calculated to keep this third “eartone” constant, while shifting the listener’s perception of it within his or her head.

Sound comes alive in and around these boxes, as Tcherepnin carves up the gallery into distinct listening scenarios and folds them into one other. Staring up from the floor, three rusted metal rain shields address visitors in strange, distinct voices; while resembling haggard characters from the city, they animate themselves, but without ever moving. Circular surveillance mirrors emit high-pitched tones — reflecting, interrupting, and distending the gallery’s sonic topography, periodically turning the entire space into an eartone box. A New York City subway bench invites visitors to sit down and watch various activities of listening — to slow down, reflect, and become sensitive —while vibrations resonate from its base.

Responding to the privatization, standardization, and disciplining of sound — a time when all sound files are compressed into mp3s and often played through earbuds whose presence we are conditioned to forget — “listening” to Tcherepnin’s exhibition involves a more expansive state of activity: listening by touching, listening by opening, listening by sitting, listening by feeling, or listening by looking.

Visitors, in particular, are asked to notice how their ears respond to the boxes — to consider the ear as a neurophonic instrument, and the human nervous system as a sonic interface. While immersing the head in a “private” listening space, these boxes foreground the listening body, putting it on display.

Tcherepnin will be included in the 55th Venice Biennale, opening June 1. His work will go on view in a new exhibition of sound works at The Museum of Modern Art, New York which opens on August 1, and he will have a solo exhibition at the Portland Institute of Contemporary Art, opening in November.

Tcherepnin recently presented a major site-specific sound and sculptural installation as part of The Imminence of Poetics, 30th Bienal de São Paulo; other recent exhibitions include Pied Piper, Part 1, Audio Visual Arts, New York (2012); Looking at Listening with Ei Arakawa, Taka Ishii Gallery, Tokyo (2011); Be a speaker. So be it... with Ei Arakawa and Gela Patashuri, CAC Brétigny (2011) and the Showroom, London (2011). Recent performances include The Solomon R. Guggenheim Museum, New York (2012); The Art Institute of Chicago with Das Institut and United Brothers (2012); Issue Project Room, Brooklyn with Woody Sullender (2012); 30th Bienal de São Paulo with Jutta Koether and Yuki Kimura (2012); Gavin Brown’s Enterprise, New York with Das Institut and United Brothers (2012). As an integral member of the late Maryanne Amacher’s research team, Tcherepnin recently collaborated on an exhibition of her archive at the DAAD Galerie, Berlin and a series of related performances.

On Saturday, March 23, as part of Synth Nights, Tcherepnin will present a performance at The Kitchen, New York, in collaboration with Woody Sullender and Okkyung Lee. More information: www.thekitchen.org