In close collaboration with the Ukrainian institutions, a major sculptor from the baroque period who was active during the mid-18th century in Galicia, the western part of the country, which was Polish territory at the time. 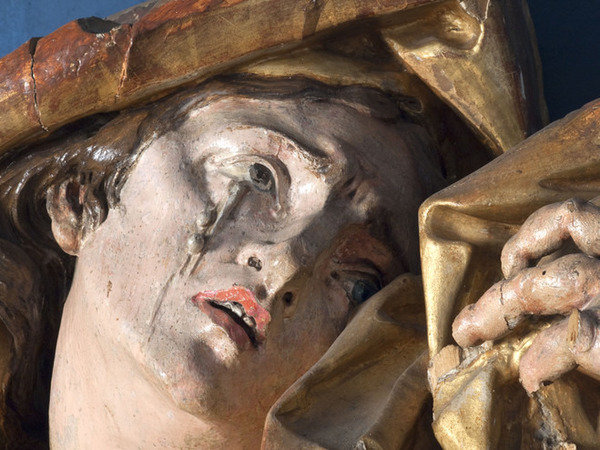 For the first time in France, the Louvre presents an exhibition dedicated to the art of Johann Georg Pinsel, who was active in the mid-eighteenth century in Galicia, the western portion of today’s Ukraine, which at the time was part of Poland. The exhibition provides a rare opportunity to view thirty of the artist’s sculptures, most of them in wood, a number of which include polychrome or gilt decoration. Although similar to that of other great German baroque sculptors, Pinsel’s brilliant style sets him apart from his contemporaries during this golden age owing to his unique personality, his ability to capture dramatic movement and vibrant expressiveness, as well as his distinctive treatment of drapery.

This Pinsel exhibition (like the Messerschmidt exhibition in 2011) is in keeping with the Louvre’s commitment to encouraging the rediscovery of major European artistic figures. It is organized in close collaboration with Ukrainian cultural institutions and is made possible through unprecedented loans especially granted for this occasion by the Lviv National Art Gallery.

Neither the exact year nor place of the artist’s birth are known. However, as pinsel is the word for “brush” in German, it is very likely that he was born in Germany. He was first documented as active in Buczacz (a city about 150 kilometers southeast of Lviv) in 1751, upon his marriage. In all likelihood, it was also in Buczacz that he died, in 1761 or perhaps in 1762, the year when his widow remarried in this same city, according to city hall records. Pinsel enjoyed the patronage of a wealthy landowner, Mikołaj Bazyli Potocki, born into a prominent Polish noble family. In collaboration with the architect Bernard Meretyn, Pinsel completed a number of major decoration projects, including the Buczacz city hall, the altarpiece of the parish church of Horodenka, the presbytery of the parish church of Hodowica, and the façade of St. George’s Cathedral in Lviv.

Active for about twelve years in this region at the southern edge of the Kingdom of Poland, at the crossroads of the Muslim and Eastern Orthodox worlds, Pinsel dedicated his spectacular and sensitive art in service to militant Catholicism.

Pinsel’s singular artistic personality had a vast influence on other sculptors in Galicia and left its imprint on the development of the art of sculpture until the end of the eighteenth century.